Trending Stories from The Marquee
You are at:Home»DJ Hippie»The Dead are reborn and re-enthused for first tour with Haynes in the Garcia slot
By Marquee Magazine on May 1, 2009 DJ Hippie, Features, Interviews 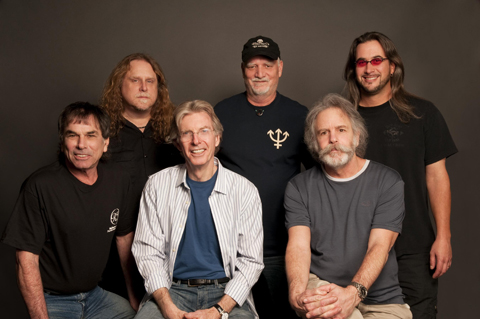 March 31, 2009 started off much like any other day that’s ever been for many people, but for many Deadheads the day held a special designation as the unofficial launch of The Dead’s  — the “Grateful” has been dropped in memoriam of the late Jerry Garcia — highly anticipated spring tour.

It has been four years since the last incarnation of The Dead toured and as Bob Weir, Phil Lesh and “touring guitarist” (Rolling Stone’s words not mine) Warren Haynes appeared alongside the chattering women’s club that makes up the daytime talk show “The View,” it was clear that another long strange trip was in the making. The trio delivered a Standards and Practices-friendly version of “Friend of the Devil” before the complete band‚ which includes percussionist Mickey Hart, drummer Bill Kreutzmann and keyboardist Jeff Chimenti, played three separate gigs at various New York venues to a small number of lucky fans.

The significance of the band’s appearance on “The View,” aside from wooing “cougars” and ranking in pure weirdness alongside Jerry explaining the band’s two drummers to Hugh Hefner on “Playboy After Dark,” was that it highlighted the importance of Warren Haynes’ contribution to the band. For many Deadheads, Haynes has unofficially succeeded the role of Jerry Garcia in the lineup. It’s something that has been a point of contention among fans and something The Marquee got to ask Kreutzmann about when he spoke with us about the upcoming tour. “You have to really listen to realize that he [Haynes] can cover so many different levels like Garcia did, he’s an amazing rhythm player and when he solos he really just takes you away. Then again, I really don’t think successor is the right word for it,” Kreutzmann said.

That open-ended answer is typical of how The Dead operate these days. The four original members, Weir, Lesh, Hart and Kreutzmann, supplemented by Chimenti and Haynes, have taken a wait-and-see attitude to their reformation and any plans beyond the current tour. As Kreutzmann told reporters during the band’s initial press conference, the tour, in his mind at least, is largely for the fans. “The reason I’m going out on tour is I know there are a whole lot of Deadheads out there that would love to hear us play again, and that to me is a really good thing to do, plus I want to play for the folks again,” said Kreutzmann.

In fact, it appears that all of the band members are really enjoying playing together again and that’s a relief for fans who have seen several periods in the band’s career since, and even before, the death of Garcia, where the members were playing more out of habit and sense of duty than passion. Kreutzmann was one of the last to return to the fold after Garcia’s passing and sat out the first attempts to re-form, choosing instead to move away from the spotlight and set up house in Hawaii. “It was time for me to take a break and heal, basically — get away from the road. I was in retirement, I didn’t even do the first Other One’s tour, but now I’ve got the bug back and I just can’t play enough,” Kreutzmann said.
That seems to be true for the whole band at the moment. The group undertook extensive rehearsals — some of the choice footage filmed by Kreutzmann’s son Justin is available at Dead.net — and has reportedly worked up over one hundred songs, including some rarely played nuggets.

What is noticeably different this time around is the lack of three or more concerts in the same venue. There have been a few nights added here and there, but the schedule seems almost lacking in terms of multiple night shows. Naturally, both the economy and the band members’ advancing ages have been rumored factors this time around, but it’s something that remains a mystery according to Kreutzmann. “I don’t know, it’s probably a combination of both. You know, I don’t really have an answer for that, I could make one up but I won’t. I really enjoy the multiple night shows,” he said.

Either way, it’s amazing that The Dead are still here and even more amazing that they are once again so thrilled about playing. There was a time when it seemed that one song, in particular, might be a mixed blessing for the band and that some felt, and still do, signaled the beginning of the end for the Grateful Dead. That song, of course, was the band’s only top ten hit, “Touch of Grey.” Released in 1987 as a single off the In the Dark album, the song shot the band’s popularity through the roof and soon the Grateful Dead was packing stadiums and playing to crowds of uninitiated spectators who left shows bewildered that the band didn’t perform “Truckin’” for an encore. The influx of pleasure seekers frustrated the true Deadheads and the one place that the “peace, love, and LSD” vibe from the Sixties had survived was never quite the same.

The irony of “Touch of Grey” is that song didn’t signal an ending but rather, as is clear now, a new beginning for a band that has constantly defied the rules and changed them as well. “That song was about us getting older. We all have a touch of grey. I have slightly more than a touch,” Kruetzmann said jokingly. “You know, Hunter [Robert Hunter, the band’s longtime lyricist] writes what he has to write about the times. The whole thing about that song is we will survive, that’s what we’ve done. We got through eight years of a terrible administration and we will survive, that’s like the catch line of that song.”

Recommended if you Like:
• The Grateful Dead
• Rat Dog
• Phil Lesh and Friends