Trending Stories from The Marquee
You are at:Home»Album Reviews»Eminem
By Marquee Magazine on June 1, 2009 Album Reviews, DJ Hippie 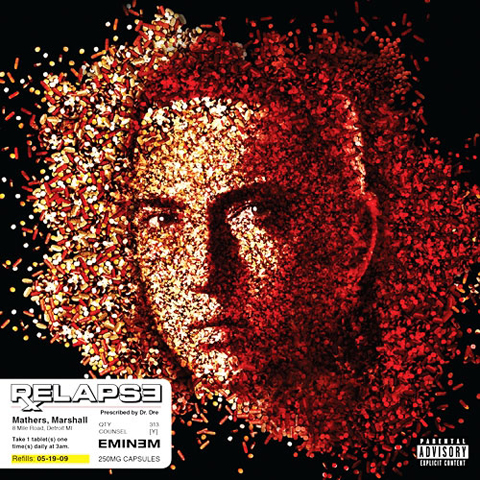 After a four-year break, Eminem returns to the microphone with his first “sober” album. In the past, listening to Eminem has been a lot like listening to a musical psychology lesson and that was largely the appeal, for this critics at least.

On Relapse that hasn’t changed, but what has changed is that Eminem is viewing the world as a person in recovery and the result is, sorry to say,  mixed. The first half of the album is a bit boring compared to Eminem’s other albums. A lot of the time it sounds like he is trying to parody himself and his often vulgar alter ego, “Slim Shady.” Even the standout track “Insane,” a shocking up front attack on childhood sexual abuse, sounds more like it belongs to Insane Clown Posse than to Eminem. There are some other moments of lyrical genius but the songs just don’t have the same punch as “Lose Yourself” or “The Way I Am.”

The second half of the disc is a lot better. While the whole album touches on Eminem’s pill addiction, the songs “Medicine Ball,” “Déjà vu” and “Beautiful” confront it with intensity that possibly no other mainstream artist has ever dared. The self-reflection is beyond stunning and if Mr. Mathers’ is practicing what he preaches he may just stay sober.

The last track “Underground” ends the album with the kind of sarcastic anger that made Eminem famous in the first place and one can only hope that the next album, that is already finished, is more in that vein.

In any event, Relapse will top the charts and it is refreshing that the only rapper “with the balls to say it” is back where he belongs.