Trending Stories from The Marquee
You are at:Home»Features»Kort McCumber changes his style on aptly named Ain’t the Same As Before
By Marquee Magazine on June 1, 2009 Features, Interviews, Joe Kovack 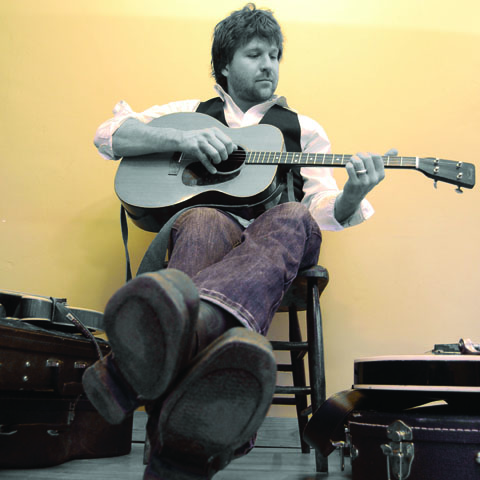 The Colorado-by-way-of-Florida based singer/songwriter has, for years, been turning out bluegrass tinged Americana, but with his latest album, Aint the Same as Before, McCumber takes a hard left from the style of his last few albums toward a more rock and blues-fueled one. But that’s just McCumber, throwing away his preconceptions of what his music should sound like, and letting his songwriting dictate its fate.

“This is my seventh record, sixth solo record and I put out a DVD in 2007,” McCumber said in a recent interview with The Marquee. “So I’ve done a lot since my start in 2000 and each one was cut a little different. The early ones, I cut everything separately, but the last three records I cut my guitars and vocals together for a more live feel. This time I wanted the rhythm section and my stuff cut live, and it was super rewarding to pull that off. Being able to work with seasoned musicians who after about two or three takes and it was done was really impressive, to be able to create that in a studio setting was really rewarding.”

Born and raised in Jacksonville, Florida, Kort McCumber began his musical career by studying classical piano and cello from his mother. Though temporarily leaving the pursuit of music and following in his father’s and uncle’s footsteps as a Division I NCAA golfer, the love of music never fully left.

Having moved to Nashville early in 2000, it was after attending the Rocky Mountain Folk Festival in Lyons, Colo., McCumber realized it wasn’t golf that was his passion, it was playing and creating his own brand of music. On his website, McCumber states that he didn’t choose to become a musician, rather it was the music that chose him. And it was his love of playing and the naturalness of it that kept that fire alive. Living and playing in Nashville, he realized that his true potential wouldn’t be reached in “Music City,” but rather in the mountains of Colorado, where a few of his respected contemporaries were playing their diverse brand of folk and Americana to more receptive fans.

“I loved the music community out here; I loved the camaraderie about it.  I wanted to be a working musician, and in Nashville I was only playing a few gigs a month while working odd jobs. But what I wanted to do was play 15 to 20 shows a month, and when I came out here I was able to find a large number of great little mountain towns that were open to my kind of music,” said McCumber.

In 2003 McCumber moved to Gold Hill just outside Boulder, for good, following his dreams to be engrossed in these majestic mountains and to be a part of an eclectic musical region. “I’m such a fan of being in the mountains and not really being in big cities, and being in the mountains and in the remote has had a positive influence on my writing,” said McCumber.  “But what really affected me was that the musicians out here wanted to be here —wanted to play music here. And the audience here is so open to genre-mixing, where as in Nashville you almost have to stick to the more traditional formulas.”

A talented multi-instrumentalist, McCumber plays everything from guitar, banjo, mandolin, harmonica and piano in his brand of Americana that’s one part rock and blues, two parts country-bluegrass and all parts McCumber. But it is his songwriting abilities that have made him a Colorado favorite, and garnered him national and international recognition. A winner of last year’s Flat Rocks Festival Songwriting Competition in North Carolina and a finalist in this year’s International Songwriting Competition, McCumber has been humbled and inspired by the achievements, which only adds to his passion for touring and sharing his music with every town he visits.

Playing roughly 175 shows a year across the country, McCumber posts about 40,000 miles to his odometer annually, and is no stranger to the pleasures and perils of the road. “There’s so many things that happen. There’s breakdowns, accidents, but the great thing about touring is you get to meet a lot of great people and a lot of great musicians that I’ve been able to stay in touch with, and that has ended up shaping my music as well,” he said.

On June 11 at Oskar Blues in Lyons, Colo., McCumber will be celebrating the eighth anniversary of his first show in Colorado, which not coincidently was at Oskar Blues — fitting that it will also be a CD release party for his latest. The show is just one of many that McCumber will be playing in the next few weeks, and that’s the way he likes it. “Touring and being a tour musician is something I love to do, and my goal is to do it for a long time” he said. “I feel really lucky to live in Colorado and have this community of musicians and listeners, and to be around it is pretty special.”

Recommended if you Like:
• Todd Snider
• Peter Rowan
• Brett Dennen