Trending Stories from The Marquee
You are at:Home»Cover Story»Meese dropping Broadcast late this month and taking their turn in the national spotlight
By Marquee Magazine on June 1, 2009 Cover Story, Dan Rutherford, Features, Interviews 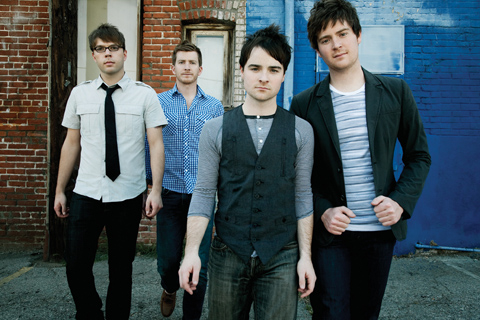 On a warm Tuesday night in early March, nearly 200 of the Denver scene’s most recognizable faces packed Denver’s Larimer Lounge — not for a bloggerati praised “savior of rock” or even the U.K.’s hottest import — but for a poorly veiled “secret” show for hometown heroes, Meese.

For the first time, the band was able to share a year’s worth of studio sessions, countless knob tweaks with acclaimed producer Sean Beavan (Nine Inch Nails, Marilyn Manson), and more importantly, the announcement that Broadcast, their first full-length on Atlantic Records, will be in stores June 30.

Months of speculation and unfounded claims of the label’s lack of interest by envious messageboard trolls quickly halted that evening. Since their signing in October, 2007, the ominous shadow cast over the band who have been touted as “Colorado’s Next Big Thing” quickly started to dissipate and for the first time, their opportunity to shine in the national spotlight was visible on the not-so-distant horizon.

Unless you’ve lived under a rock for the past thirty-six months, you’ve probably caught a first-hand glimpse of the band’s meteoric rise to the top of the local scene. Undying support from every relevant press and radio outlet helped the band reach thousands of fans and allowed them high-profile opening slots with powerhouses like Fall Out Boy and The Fray.

Chatting with Patrick Meese is similar to having a conversation with your distant cousin at a family reunion — guarded enough to minimize any juicy gossip or inappropriate stories slipping, but at the same time extremely honest and excited about the new record. His distaste with the “hurry-up-and-wait” mentality of record labels is balanced with his excitement for the band’s summer schedule supporting The Fray, Jack’s Mannequin and Copeland, which could potentially turn the band — made up of Patrick, his brother, Nathan Meese, Mike Ayers and Ben Haley — into the next “overnight” sensation from the house that Ahmet Ertegun built — Atlantic.

Diving into the record, Patrick pointed out in a recent interview with The Marquee, “All the songs have some individuality but are still under the Meese blanket.” This is easy to agree with, as a healthy portion of the record’s new tracks veer in the direction of heavier guitars and darker lyrical themes you won’t find on the band’s earlier work. The most obvious example is the first single “Next In Line,” which could be sandwiched comfortably between labelmates Death Cab For Cutie and The Academy Is… The success of “Tell Me It’s Over (f/k/a The Start Of It)” locally makes it the sentimental choice in the hearts of fans and local know-it-alls, but Meese promptly rebuffed, “We want to go to alternative before releasing ‘Tell Me It’s Over,’ we want to champion the youth.”

With that said, the youth will be out in full force this summer when Meese hits the road with Copeland, followed by a short stint with good friends and fellow Denverites, The Fray. This will be their second tour with the multi-platinum band and with Broadcast hitting shelves and digital retailers weeks before, Meese is perched to strike a chord in the hearts of countless new fans across the U.S.

But while Meese said the group is happy about the amphitheatre tour, he also said that they have some trepidation, since larger tours inevitably mean some sort of disconnect from fans. “If 30 people come to your club show, then it’s 30 people who know you and in return you get to know their faces. It’s really hard to connect with fans at large shows, especially when you’re the first opener. Sometimes you don’t even know where the merch booth is to come out and meet fans afterwards,” he said.

As a balance and way to connect in a more intimate environment with fans post-The Fray/Jack’s Mannequin dates, the band plans to hit the road again in the late summer as a necessity to promote the record. “Tours are impossible! Bands who we would attempt to open for are packaged on stadium tours this summer, like Franz Ferdinand who are supporting Green Day. Sway from labels and management isn’t there anymore, it’s all who you know,” Meese said.

But with that in mind, don’t dismiss the possibility of Meese partnering with another Colorado artist in the future. “It’s always more fun when you play with friends,” Meese said. “You raise your game.”

Could that mean a tour with Single File, Tickle Me Pink, The Swayback, or possibly Speakeasy Tiger? Only time will tell.

Collectively for right now though, Meese looks forward to June 30, when they can head to the record store and pick up their record.

While Meese truly celebrated Broadcast back on that warm night in March at The Larimer, they will share their release with Denver again this month, at the Westword Music Showcase. “We want to celebrate the fact that it’s done with our fans and friends. We’re appreciative of all their support,” said Patrick Meese, adding humbly, “Thanks to Denver for giving us a chance to succeed.”

Meese have grown into their own skin and are poised to push the signal of their initial Broadcast worldwide. People will embrace this album for what it is — a genuine, complicated, and at times, heartfelt collection of songs put forth by one of the region’s best bands.

Recommended if you Like:
• Franz Ferdinand
• Death Cab for Cutie
• Copeland