Trending Stories from The Marquee
You are at:Home»Features»Phoenix pays homage to classical with their latest release Wolfgang Amadeus Phoenix
By Marquee Magazine on June 1, 2009 Features, Garin Pirnia, Interviews 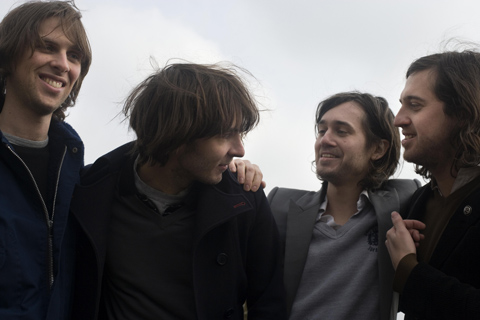 Some bands settle on a definitive genre early in their career; others refuse to be classified.

Throughout four albums, Parisian quartet Phoenix has dabbled in pop, R&B, funk, soul, and electronica, which has led to a complex and distinctive sound. 2000’s debut United flickers with moments of jazz, psyche and country, while the follow-up Alphabetical heightens the senses with dancey hits “Everything is Everything” and “Victim of a Crime.” 2006’s It’s Never Been Like That augmented their fan base, but their latest record, Wolfgang Amadeus Phoenix portends to be their best and most accessible to date. The Marquee phoned up bassist Deck D’Arcy at Phoenix headquarters in Paris to discuss what makes this band so flat-out awesome.

The guys have been friends since childhood, which has been a key ingredient in propelling the band forward. “It’s a very collective work,” said D’Arcy. “All the songs are written by everyone. We pretty much hang out together and wait for the magic to happen. This can take a lot of time. We are convinced that good ideas cannot come from our brain; they have come from accidents. This is the way we work.”

While waiting for the abracadabra, the band spends holidays together and lead singer Thomas Mars raises a daughter with Sophia Coppola. The band contributed a mixtape to Kitsune Tabloid that demonstrates their wide array of tastes, ranging from Tangerine Dream to Dusty Springfield.

Despite all the classical references in the album, Wolfgang isn’t directly about classical music. D’Arcy says the single “Lisztomania” is more about composer Liszt living the life of a fantastical rock star. “We like to keep everything fresh,” said D’Arcy. “Touring after a while isn’t fresh anymore, so we have to go back to the studio and make another album. It has to be fresh all the time. It’s a challenge.”

Phoenix corners the market on fresh, as each of their albums sound disparate. These haven’t been conscious decisions, however. “I think we did the opposite on what we did on the previous album, but the way we work is completely different. I noticed the fourth one is very different. I think we kept the energy of this album and production. We only have consciousness when we stop recording an album. After a few weeks, we just go with the flow,” he said.

The band strongly advocates DIY as they record in their own studio and only (sorta) use a producer. Philippe Zdar came aboard to help the guys improve their songs, but D’Arcy purports that he’s not a real producer in the sense of the definition. “I think he [Zdar] really focused on our Phoenix trademark. It’s a real Phoenix album. He was really useful on that. He actually saved the song ‘Fences.’ In the beginning, we wanted to throw it away, and he said we had to keep it. He’s so enthusiastic it’s like you have to follow him. He really improved what we were doing,” said D’Arcy.

As the band develops, D’Arcy is content to keep things the way they are, but with a recent appearance on “Saturday Night Live,” the band’s quiet days might be numbered. “The European way to reach the goal is not the goal itself,” he said. “Maybe one day we will become big, or whatever, but we’ll lose the excitement. We’re happy now. We’re getting better and better. We are low level and it’s great. Our life is the same as when we were kids. I’d like to stay where we are right now.”

Recommended if you Like:
• The Whitest Boy Alive
• Cut Copy
• Sébastien Tellier