Trending Stories from The Marquee
You are at:Home»Brandon Daviet»Aerosmith
By Marquee Magazine on July 1, 2009 Brandon Daviet, Features, Interviews

Aerosmith works on new album and brings old one, Toys in the attic, on tour in its entirety 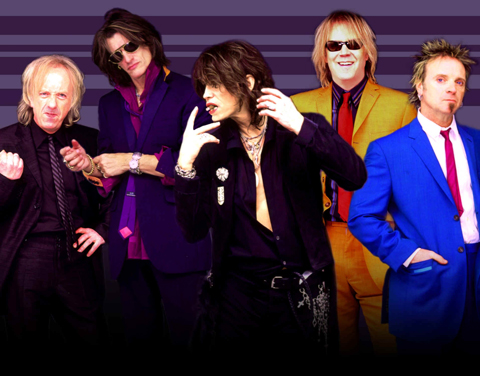 When you ponder the curious career of Aerosmith you really have to consider two separate phases of existence. There is, of course, the first phase that formed at the dawn of the Seventies and proceeded to spend the decade honing their music with hedonistic albums like Draw the Line and Get Your Wings, while helping cement new definitions of rock and roll excess both onstage and off. As the world ushered in the ’80s the band’s internal conflicts and reputation for partying caught up with them. While the band never actually broke up, both guitarists, Joe Perry and Brad Whitford, left the band for a while and the group’s once magical chemistry suffered. “The band had kind of broken apart in 1979 and a couple of years later the remaining members, myself, Joey and Steven, brought in another guitarist totally believing that we would pick up right where we left off and it would be Aerosmith the sequel,” said bassist Tom Hamilton, who spoke to The Marquee shortly after the first gig on the band’s current tour. “It took time to realize that wasn’t going to happen and for the five of us to realize we belonged to something really great. Then, right in that period MTV came along and I remember thinking, ‘Oh my god, we’re not going to be here for this.’ Here is this new exciting way to present your music and we were missing the boat.’’

Of course, as history shows, Aerosmith didn’t miss the boat of the video generation. Perry and Whitford eventually returned and in 1987 the second phase of their career began in earnest. After being signed to Geffen Records the band released Permanent Vacation just about a month after Guns N’ Roses debuted Appetite for Destruction, and began what is largely regarded as the greatest comeback in the annals of rock music. The two bands, who eventually mounted an infamous tour together, helped bring some integrity back to rock and roll, a style that was at the time becoming more about lipstick than guitar licks. In fact, one of Aerosmith’s first big hits from Permanent Vacation, “Dude (Looks Like a Lady)” is a combination of parody and tribute to the bands, particularly Motley Crüe, who ruled the MTV airwaves at the time. The video for the song introduced a whole new generation to the band’s infectious grooves and singer Steven Tyler’s lips. Two years later, the band further justified their comeback wasn’t a fluke with the album Pump. Pump was a smash, spawning a bevy of hit singles, including “The Other Side” and “What it Takes.”

While the post-comeback music was amazing in and of itself, even more amazing was the fact that Aerosmith, whose singer and lead guitarist were often referred to as “The Toxic Twins” during the Seventies, were now clean and sober.

As of late, Aerosmith is once again finding new ways to interact with and reach fans, with their fan club V.I.P. ticket packages and the release of their very own “Guitar Hero: Aerosmith” video game. The game differs a bit from the others in the series by featuring a plot line that follows the band’s rise to fame. Part of this is due to the band’s involvement in the game and the emergence of such games has provided a well needed shot in the arm for the music industry. “I think for some bands it’s saving them, as you said, because people don’t want to buy CDs anymore and one of the reasons people don’t have money to buy CDs is they are spending it on video games,” Hamilton said with a laugh. “I don’t look at it as a replacement for the classic album and the classic recording contract. To me, those things are about the music, about the part that goes in through your ears, but a lot of people now are accustomed to having visuals going along with their music and I don’t know that they are able to separate it anymore.”

As visuals go, the most enduring in regards to music is the live performance. Hearing a great album is one thing, but seeing the spectacle that is a rock and roll show is something on a whole other level. Aerosmith will be spending the summer combining the two staples by performing their third album, Toys in the Attic, in its entirety. It’s far from a novel concept this summer, as everybody from Steely Dan to Ratt to Judas Priest is giving the concept a go. (Note: At press time reports were surfacing that the band may also start playing their 1976 album Rocks as well.) “Right now you have all this reinvigoration of our older music because of the game, but there was also this revival of classic rock going on slightly before the first “Guitar Hero” came out. So I don’t know which made which happen but I think it has grown beyond what people expected,” said Hamilton.

For fans, the other tour possibility is the potential debut of new music from the upcoming album the band will finish after the tour. “We are thinking about it,  it’s early on so right now we are just really concentrating on getting things up and running.” said Hamilton. “There are a few new songs we have been rehearsing and it would be really great. We got a couple that are very cool rock songs that we’d like to show people.”

Recommended if you Like:
• The Rolling Stones
• Guns N’ Roses
• 10 Years After