Trending Stories from The Marquee
You are at:Home»Features»Ra Ra Riot
By Marquee Magazine on July 1, 2009 Features, Interviews, Timothy Dwenger 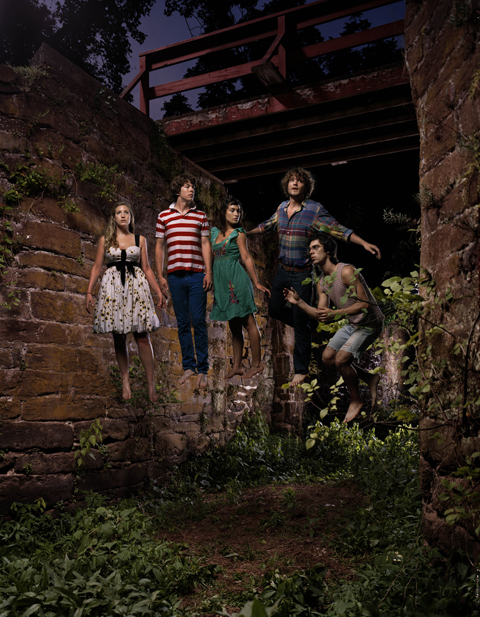 For the last two years the six members of Ra Ra Riot have been touring their highly energetic brand of pop music from coast to coast, drawing rave reviews nearly everywhere they play. They have headlined mid-sized theaters, sold out small clubs, and landed some noteworthy opening slots with the likes of Editors and Tokyo Police Club.  With all their successes, however, it wasn’t until this spring that they got to look forward to some of the biggest stages in the country when they were invited to join Death Cab for Cutie’s summer tour.

“They saw us when we played at a festival in Holland that they were also playing,” guitarist Milo Bonacci told The Marquee during a recent interview as he relaxed in Brooklyn on a break from the tour which he referred to as a “month-long weekend.” “Chris Walla introduced himself to us and seemed to be really excited about our show. I don’t know if that was the first thing that sparked it or not, but it seemed to have led to some other discussions. It turns out we have some common friends in the industry, so it just sort of developed and we were thrilled to be asked to a part of the tour. It’s a huge step for us and it’s really exciting.”

While out with Walla, Ben Gibbard and the rest of Death Cab, they have had the opportunity to take the stage of some historic and beautiful venues, including the Ryman Auditorium in Nashville and the Fox Theatre in Atlanta. “It’s very humbling and I feel extremely fortunate to step onto those stages and get a taste of what it might be like to headline them someday. It’s a lot of fun to be in the historic venues, and I know we are all really excited about Red Rocks. A couple people in the band are huge U2 fans so there’s that, and The Beatles performed there. Obviously, it is also really beautiful and we haven’t played too many outdoor shows of that caliber, so it’s exciting for that reason as well.”

Though they are in the challenging first slot on what is typically a three-band bill this summer, Bonacci and his bandmates have a very positive outlook on the tour. “It’s been pretty successful for us. I’d like to think that we are finding new fans,” he said. “The first time slot of the night is a challenging spot to fill because most people are still finding their way into the venue and finding their seats. It’s been such an honor to be a part of the tour that it outweighs whatever obstacles we face.”

All bands face obstacles as they are starting out and trying to get over the hump to critical and popular recognition, but in 2007 Ra Ra Riot was dealt a particularly nasty blow. After a show in Providence, R.I., founding member, drummer, and prolific songwriter, John Pike went missing and was later found dead in the waters of Buzzard’s Bay, Massachusetts. Pike had a hand in writing many of the songs on the band’s current release, The Rhumb Line, and he and frontman Wes Miles collaborated on the band’s lyrics. “Lyrics are the one area of our band that has been the most directly effected [by Pike’s death]because it was only Wes and John writing all the lyrics together and now, obviously, it is just Wes.”

Bonacci went on to say that it really remains to be seen what else has changed because they simply haven’t had much time to focus on new material since they have been spending so much time on the road. “There are plenty of new ideas that we are just sitting on until we get the time to work on them together,” he said. “It is hard to say if our style has changed because we haven’t really had much of an opportunity to write much since we recorded the album. That’s something that we are going to be spending the rest of the summer doing.”

While the details on where, how and with whom they are going to record their next record are still up in the air, Bonacci did reveal a rough schedule that had the band in the studio in the late fall or winter, with the goal of releasing a follow-up to The Rhumb Line in the spring of next year.

What we can expect to hear on that new album is anyone’s guess and Bonacci wasn’t optimistic that fans would get to hear much, if any, new material this summer.  “We pretty much have to choose songs that people might be familiar with, or songs that are available to anyone who wants to hear them again. We just don’t have much room to play new material or anything like that on this tour,” he said. So expect to sing along with your favorites from The Rhumb Line, and if you are being exposed to Ra Ra Riot for the first time, take comfort in the fact that you can pick up that album and hear those songs from the live set that you just can’t get out of your head.

Recommended if you Like:
• Arcade Fire
• Wolf Parade
• Cloud Cult