Trending Stories from The Marquee
You are at:Home»Album Reviews»Jaden
By Marquee Magazine on August 1, 2009 Album Reviews, Jonathan Keller 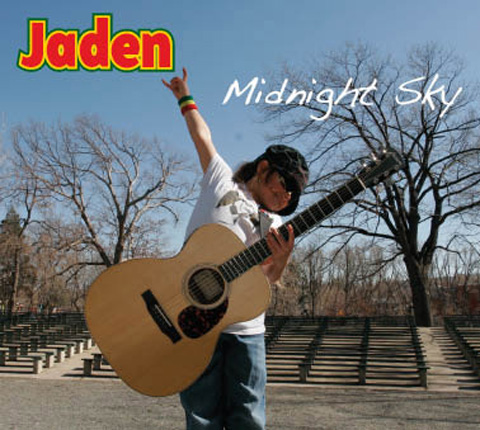 If you live in Colorado and have not yet heard of Jaden I am sure you will.  This 8-year-old girl from Louisville, CO just released her debut CD, Midnight Sky. What is even more startling is that she sings, plays guitar and percussion, and wrote nine of the album’s 11 tracks; lyrics and all. Did I mention she was eight years old?

Jaden first got the urge to play guitar at age 5 while at a Michael Franti & Spearhead concert. A year later she convinced her parents to have her start lessons and she began training with classical Suzuki.

Before long she was figuring out and learning her favorite rock tunes, including songs by Jimi Hendrix, Bob Marley, Pink Floyd and the Grateful Dead. Soon thereafter she was writing her own material and sitting in with national acts such as Michael Franti & Spearhead and Keaton Simmons. News of her talent was obviously spreading quickly.
Midnight Sky is Jaden’s debut album and is an 11-track effort featuring simple instrumentation; Jaden on acoustic guitar, vocal and simple percussion.

The album’s final tracks were recorded and produced by Michael Versace, Michael Franti & Spearhead’s front of house engineer, in a one-day session in San Francisco.

In listening to this album’s songs, one wouldn’t think an 8-year-old wrote them. Jaden’s songwriting shows maturity beyond her age. Some of her compositions that stand out are “Cool Rain,” “Midnight Sky,” which features harmonic tapping technique on the guitar, and the instrumental “Rockin’ Blues,” which was written as a Christmas present for Versace.

The two cover songs on the album were both written by Michael Franti, “Hey World” and “Nobody Right, Nobody Wrong.” Both are wonderfully performed and a great tribute to the man who inspired her from the beginning.

If anything, Midnight Sky is an album that should show people anything is possible if you harness your talent and your abilities. I can tell you Midnight Sky has inspired me.
On another note, Jaden also enjoys drawing and coloring, soccer and swimming.