Trending Stories from The Marquee
You are at:Home»Features»M. Ward
By Marquee Magazine on August 1, 2009 Features, Interviews, Timothy Dwenger 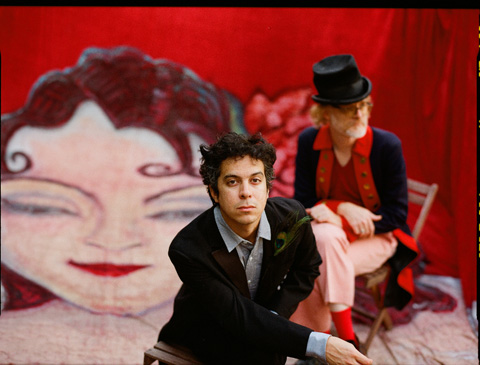 He is the “Him” of She and Him, a member of The Monsters of Folk, an accomplished producer and, of course, a wildly talented solo artist who has slowly emerged into the public consciousness with a string of critically acclaimed albums. Beginning in 2000 with Duet for Guitars No. 2, M. Ward formally started a career in music that had, in reality, begun years earlier as a high school student locked in his bedroom with a four-track tape recorder.

Since those days in high school, Ward, now 36, hasn’t slowed his prolific pace and still uses his trusty four-track to capture his ideas. “As soon as I was done recording, mixing and mastering Post War I started thinking about the next record because that’s the way my weird brain works,” Ward told The Marquee from his home in Portland, where he was working on plans for an upcoming Monsters of Folk tour. “I go through my tapes of hundreds of songs that I wrote and hundreds of songs that I have been listening to since I was a kid to find songs that will fit together on a record.” Ward freely admits that some of the songs on his recent release Hold Time could have been written ten, fifteen or even twenty years ago. “All of the records that I have made are a combination of songs that I have been writing since high school and songs that I wrote yesterday.”

It’s this kind of timeless quality that attracts many to Ward’s music and it’s a quality that he works hard to achieve. “I think it is good if the listener isn’t exactly sure how old something is, whether it is a song or an instrument or a chord progression.” Though Ward produced the album, he gives a lot of credit to engineer Mike Coykendall and a recording studio in the attic of Coykendall’s house. “It’s an incredibly warm home studio,” Ward said. “The house is very unassuming from the outside but the sounds that come out of the attic are perfect for me. Mike is a very musical engineer and his knowledge of songs is incredible. He’s not just somebody who twiddles knobs.”

Together, they were able to carefully craft Ward’s music and the covers he chose to record, to achieve the specific sound he had in mind for the record. “The quest on Hold Time was to find a new sort of balance between the rich sounds of the orchestral instruments that I have been learning about for the last few years, and the thinner sounds that I grew up recording on my four-track,” said Ward.

The pair used a wide variety of vintage and new equipment including “old guitars and cheap keyboards,” and enlisted the help of a cast of characters that included Lucinda Williams and Zooey Deschanel (the “She” of She and Him) to achieve their goal. “I feel the end product has a really interesting balance that I have not heard on other records except for maybe a Billie Holiday record called Lady in Satin, where her voice is accompanied with a full orchestra. That was definitely one of the inspirations for this album,” Ward said.

As was obviously the case in the studio where Holiday recorded Lady in Satin, Coykendall’s studio is a completely analog environment. “I am not too convinced that digital technology is advancing music in good ways,” Ward said. “I feel that analog equipment is the way to go to create a finished product. I feel that digital technology and digital equipment has a disposable feel to it that I’m trying to avoid in my music.”

Ward is clearly very particular about his music so it should come as no surprise that playing festival sets, where he has very little control over the sound or the environment, comes as a challenge to him. While it is one he is open to and has been tackling with more frequency in the last several years, “It just takes a different sort of strategy because when you are playing outdoors to thousands of people you can’t depend on the nuance as much as you can in a cozier setting,” said Ward.

Ward will get the chance to play a festival set in a “cozier setting” when he appears solo at the Rocky Mountain Folks Festival in Lyons this month and he “will attempt to create something a little bit more intimate in an outdoor setting.” Then he will return to Colorado in September accompanied by a four piece band to rock the Monolith Festival. “We have a nice big sound and they are an incredible group of musicians. That is always an incredible venue to play and I’m really looking forward to that one as well,” he said.

So, with Ward playing two completely different kinds of festivals right here in Colorado, fans are sure to see him don two different musical costumes. There are even some unconfirmed rumors floating around that Ward may have some special guests joining him during his set at Folks Fest. With the chart topping success of Ward’s She and Him collaboration with Zooey Deschanel in the not too distant past, and the confirmation that the pair have been working on a second album, one can only hope.

Recommended if you Like:
• Vetiver
• Bonnie “Prince” Billy
• Andrew Bird