Yonder serves up its latest musical recipe, its fifth studio album, The Show 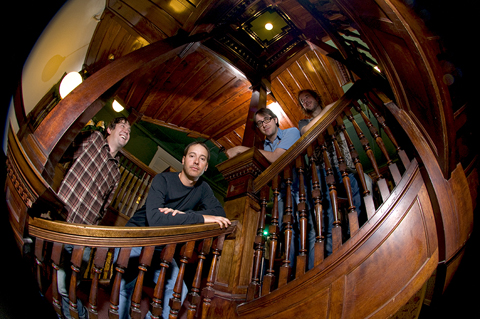 Ever thought about how closely cooking and music are related? Maybe not, but it’s clear that Yonder Mountain String Band’s Jeff Austin thinks about it a lot. As a self described amateur chef and “foodie,” and a full-time member of one of the biggest bluegrass bands around these days, he has plenty of experience with both art forms.

Austin is a walking encyclopedia of high-end restaurants in every nook and cranny of this country, but it is his taste on mandolin and the recipes that he and his comrades serve up on stage that has not only catapulted them, but sustained them in the international bluegrass spotlight for so long.

“Food and music are very, very similar,” Austin said in a recent conversation with The Marquee on the deck of a little café just minutes from his Nederland, Colo., home.  “The collaboration between you and an instrument, the thought process of a song and the thought process of a recipe, the fact that you really have to pay close attention to your essential basics and after that you are free to improvise. It’s really the same.”

Perhaps it was the rapidly approaching dinner hour, but as the conversation meandered around various musical topics, it seemed to frequently gravitate back to food and it wasn’t long before Austin drew a long comparison that really seemed to sum up his approach toward both art forms.  “If you just write a song that is solely depressing, you are only going to get one level of reaction out of people. But, if you take people on a journey and really give them a story that they can sink their teeth into and you make it happy and sad, fast and slow, with trippy parts, improv parts, and well executed arranged parts, that is going to appeal to the whole palette and give you a multi-faceted reaction. It’s the same thing with food, or at least, it’s the same way I approach my food,” he said.

Austin and his bandmates, Ben Kaufmann (bass), Adam Aijala (guitar), and Dave Johnston (banjo) have had a knack for seeking out and hitting the right notes for more than 10 years now.  They have had substantial crossover success in the jamband, bluegrass, and rock genres, and they sell out large theaters all over the country. However, the road is long and full of rough patches and the last few years have had their ups and downs. They were forced to back out of a recording contract with Vanguard Records and more recently, issues close to the band forced the cancellation of this year’s late winter tour. While Austin was tight lipped about the latter situation he did offer some thoughtful insight into what happened. “Let’s just say it was an intense period of time for all four of us in the band and it came to a head. There was a point where we said, ‘We need to stop for a few weeks, because if we don’t stop for a few weeks now, it may grind to a halt altogether,’” he said.
“We just needed to take a big step back and look at what was at stake; look at everything that had happened with family members, with band members, with this and that and to just go, ‘Where do we go? Does it start again, or does it stop?’ We all came together and came to the conclusion that it is really worth it, emotionally and every other way, to keep it going and to try and heal it. It’s gotten better, it’s gotten way better.”

In fact, Austin sounds fired-up and excited about the future of the band and when the conversation turned toward Yonder’s upcoming album, The Show, he talked excitedly about everything from the stunning artwork that was still in production, to the new jam vehicle he sees in the Adam Aijala penned “Honestly.”

The album, their fifth studio effort, will hit record stores on Sept. 1, but the band will be giving it away just a few days before at their CD release party at Red Rocks. They again enlisted Tom Rothrock (Beck, Elliot Smith, The Foo Fighters) to produce the record and Austin can’t say enough good about the man. “He continues to amaze me.  If we never did a record with anyone else I would be a happy man,” he raved. “He’s a real producer. He taught me something so valuable on this record that I will have with me forever; a life lesson, and you don’t get many of those.  I can’t really go into too much detail because it is kind of a studio secret of his, but we were trying an approach to a song and he made a suggestion that seemed very innocent and everything just clicked, suddenly the song popped and it was finished,” Austin said.

Austin did elaborate a bit further when he related a little more of the lesson later in the conversation. “There are a million words but there are only a few emotions – happy, sad, angry, love – there are only a handful. When you can tap into those you get Beck’s “Loser” or hits of Elliot Smith’s or the Foo Fighters.”  While he isn’t reveling in thoughts that the record will sell as many copies as the projects Rothrock did with those artists, he is optimistic about the projected sales and was very careful to mention that giving away the CD at Red Rocks does not count toward the album’s sales numbers at all.

In a move that might please a lot of long time fans who have been waiting to hear a crisp, clean studio version of their favorite song, Austin revealed that much of the material on the album has been road tested for years. “A lot of the stuff on this record is older stuff,” he said. “Many of these songs have been around for a while so they have been refined. In fact, there are only really two new songs on the album. ‘Honestly,’ by Adam and ‘Isolate,’ by Dave.”

New songs and old, the album had been the perfect soundtrack for a beautiful drive through the twisting and turning canyons of the foothills earlier in the afternoon, and when the sky broke through the trees and the view from the porch of the Sundance Café opened up, it felt like exactly the right place to be listening to this music. The wilderness embodies an amazing energy and fierce power while harboring serenity and beauty and all of that is reflected in the music that Yonder Mountain String Band creates.

As he sipped his beer, talked at length about music and food, and gazed out at the majestic view as if it was his first time in this place where he was a regular, Austin’s charismatic, extroverted personality took on a very humble quality.  Midway through a conversation that touched on recording with legendary producers, playing alongside some of the best in the business, and eating at the best restaurants in the world, he shared a little detail about what he was up to on one of his few nights home in the middle of the summer. “I was actually right here last night bartending and doing dishes. You know, there are two girls working their butts off in there and when I saw a stack of cups and glasses in the sink, I thought, ‘Screw this.’ I said to them months ago, ‘If I’m sitting here and I see something that needs to be done, I’m gonna do it.’ So I did,” he said.

That kind of peak into his everyday life hints again at the fact that, for all his personality on stage, and his sophisticated palette, Austin is a real, down-to-earth, human being. One who participates in his community, frequently whips up (what sounds like) outstanding meals for his girlfriend, and has dreams that may one day supersede the life he is currently living. “I’d love to own a little restaurant up here in the mountains and not have to travel. That’s the long-term dream.” In the meantime, he is riding the crazy train of Yonder Mountain String Band and from the sounds of it, has no plans to get off any time soon.

Recommended if you Like:
• The Avett Brothers
• Trampled By Turtles
• Leftover Salmon