Trending Stories from The Marquee
You are at:Home»Brandon Daviet»Chickenfoot
By Marquee Magazine on September 1, 2009 Brandon Daviet, Features, Interviews 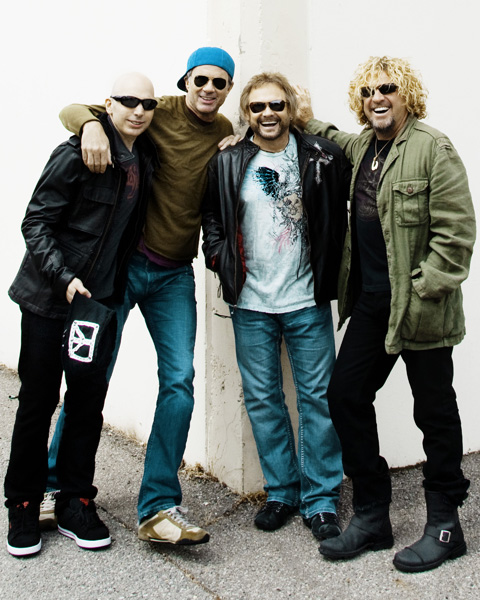 Rock “supergroups” come together for a variety of reasons, it seems. Sometimes it’s a ploy to kick-start the ailing careers of the members, usually by providing a brief boost of interest – followed by a backlash of egos that leads to self-implosion. I point to Velvet Revolver for the most recent example of that scenario.

Other times, these “supergroups” come together with much less planning and with little expectation of success.

This more humble approach seems to be the case of Chickenfoot. Even the name itself implies the lighthearted attitude of the group that consists of ex-Van Halen vocalist (and original wearer of the red jumpsuit apparatus) Sammy Hagar, ex-Van Halen bassist Michael Anthony, Red Hot Chili Peppers drummer Chad Smith, and guitar mentor and virtuoso Joe Satriani.

Taking embryonic form during tequila-soaked jam sessions held at Hagar’s Cabo Wabo Cantina down Mexico way, the band started out without any solid plans to bring the music across the border. That all changed when the band brought in Joe Satriani and started firing on all cylinders.

Chickenfoot’s self-titled debut album – that sounds a lot like 5150-era Van Halen, to be honest – has fans in a tizzy and currently the band is touring to packed houses across the States while having a blast.

“This really all started with a call I got from Sammy Hagar in February of 2008, inviting me to jam with him at the end of one of his shows in Las Vegas. He told me he had also invited Mike Anthony and Chad Smith down and that they had been jamming for a while, but it was just for fun,” said Satriani in a recent interview with The Marquee. “So I flew down with my guitar, and it just turned out to be so much better than everybody expected that we decided we had to follow it up with some sort of writing session to see if we could really make it as exciting when we were just in a room together, and that’s really how it started,” he said.

All of the band members brainstormed and the result became the album Chickenfoot, a dose of rock and roll that has its serious moments, thanks mostly to the killer musicianship, but lyrically never strays far from the carefree attitude of grown men enjoying themselves. “All of the material is new. Once I got together with Sam [Hagar] we had a good idea of the kind of songs that we could write together and I had just a few weeks before I had to go off and tour behind my Professor Satchafunkilus album, so I wrote about ten songs and made some demos and gave them to the band,” Satriani explained. “Sammy sent them around to the rest of the band and most of them they liked, so Sammy wrote some new melodies and lyrics and then we got together once before I left on tour and recorded about six of them and that really became the basis of our writing approach.”

In a very interesting move, the band recorded the album at California’s famous Skywalker Ranch, a place that is better known for producing Ewoks and Death Stars than for producing chart-topping rock albums. “Well, no, you wouldn’t use the word ‘regular’ [for the studio], it’s located out at director George Lucas’s ranch and it’s a huge and just absolutely stunning place about forty-five minutes outside of San Francisco, where I live,” said Satriani. “The studio we used was made up of an enormous soundstage that is big enough for a full-sized orchestra and the studio control room itself is state-of-the-art, and so it was really quite a luxury to record there. But, quite frankly, there wasn’t really any choice because there really aren’t any studios left in the area to record in and certainly nothing big enough to record a live band, because most studios these days are overdub studios, and we needed something big enough to set up and record in, so it really turned out great working there.”

Of course now that the band is on the road the pressing question becomes what will the group put forth to the music hungry crowds. There are a lot of possibilities, given that all of the members have plenty of history outside of Chickenfoot. A few Van Halen tracks would probably be considered mandatory to many fans, but at the same time, as Chickenfoot doesn’t plan on touring and disappearing, the band wants to give their new record a good airing. “We are still working on the live show. The obvious vibe from the media and the fans is that we are a brand new band and we are up against the same issues as any new band is, and that’s how do you get people to identify with a bunch of brand new music when you are trying to burst on the scene?” said Satriani. “We have been playing the record from top to bottom and then we’ve been doing some covers at the end of the show, but sometimes we’ll do a Montrose song or a Deep Purple song or even a Neil Young song; we really didn’t want to confuse the issue by making it a “greatest hits” of the band members’ other bands because we could do that all night and it would be a five hour show.”