Trending Stories from The Marquee
You are at:Home»Features»Jeff Brinkman
By Marquee Magazine on September 1, 2009 Features, Interviews, Joe Kovack 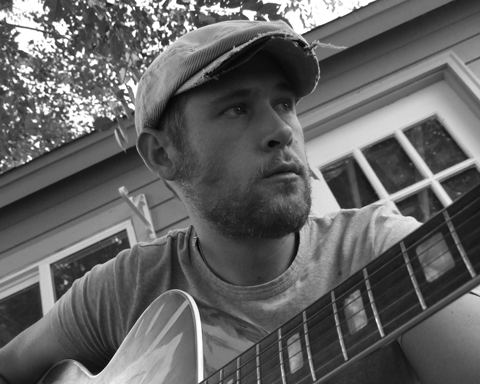 Every once in a while there is a musician who emerges with a genuine and honest approach to their craft, and whose music accurately depicts that unadulterated simplicity. With his debut album To The Bone, Jeff Brinkman places himself in that category.

“My ability to sculpt a song is kind of limited by my ability to play guitar. I just don’t have that much knowledge of music theory, so basically I start with an idea and I just keep hammering it out until it evolves into something, and then it’s usually hard to control. And so I guess it ends up pretty original,” Brinkman modestly said in a recent interview with The Marquee.

At 32 and releasing his debut album this month, Brinkman is no stranger to music. Growing up in Iowa, his first exposure to the beauty of music was listening to his father play guitar in the waning hours of the night while falling asleep. When he turned seven his parents bought him his first guitar. By age 14, Brinkman was beginning to write his own songs with vocals accompanying his guitar, influenced by the Eagles and Creedence Clearwater Revival; the very bands his father used to play at night. But this self-taught guitarist didn’t merely play covers and copy his influences; he simply used their sound to construct what came naturally to him. “I was kind of home schooled with the guitar. I had the basic chords, then I had to kind of form my own style, so the songs that I wrote didn’t really sound a whole lot like the stuff I was listening to – except for maybe the Eagles – with the simple chord changes, and the vocal stylings that I carried a lot with me from listening to that early music,” said Brinkman.

Brinkman’s melodic guitar and soulful voice capture his authentic brand of music in a way that encapsulates his audiences with unobtrusive ease.

Brinkman set his sights on Colorado after visiting with a friend while in college, inadvertently finding the haven he was looking for to pursue his music. With the combination of the majestic mountains and eclectic music scene, Brinkman knew where he wanted to be. Leaving his life of playing music sporadically in Iowa, Brinkman set sail for Colorado with the idea that this is where his music would bloom.

“I moved out here with the guy I was playing cello with at the time, and we were looking for a more percussive, Rusted Root kind of vibe, and we thought we would find that more out here because that was the type of music we were going for at the moment. And Iowa, comparatively, the music scene just isn’t really there,” Brinkman said.

Seven years after moving here, Brinkman has left the on-again, off-again life of playing out locally to focus on his first recording. With the help of Reason2Rhyme’s Bryan Wagstaff and Mark Kranjcec as producers and musicians, Brinkman has created his first album, having toiled since October of 2008 to fine tune his vision.

The experience of his first recording process is one he will carry with him. “It was just so interesting being in the studio and doing everything so separately. Working with Mark and Bryan, they just kind of dismantled the songs and helped reshape them, and it was just so interesting to do everything piece by piece and that it just became so comfortable. And it was tough – it was handing over something that I had spent a long time on, but I got to the place where I thought I had taken them as far as they could go. And having three inputs on a song to make it the best it can be was a really good move – not exactly the easiest, but it really put the songs out on the table and let everyone take a crack at it, pulling out the best parts and sift out all the not-so-good stuff,” Brinkman said.

Playing acoustic guitar with emotional vocals overtop, Brinkman hopes with his debut release that his easygoing style of music will permeate the local scene and possibly beyond. “I kind of just want to let it go as far as it can go without having to push it or pull it too much, just see how it’s accepted,” he said. “My experience has been that each song is more of a thought that people can apply to their own story, so that in turn makes the song make sense to them.”