Trending Stories from The Marquee
You are at:Home»Features»Monolith :: The Pains of Being Pure At Heart
By Marquee Magazine on September 1, 2009 Features, Festival Coverage 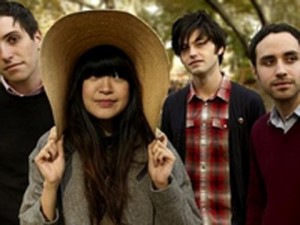 Brooklyn should be renamed the Hipster Laboratory for Retro Research. Pick any underground music trend of the last 30 years, and the New York borough has produced a smattering of near-perfect clones. We all know about no wave and post-punk, so let’s take a look at “twee.” In addition to the Vivian Girls, there’s Crystal Stilts, Cause Co-Motion! and the excellently named Pains of Being Pure at Heart. As with those other bands, the Pains reproduce the fuzzy, lo-fi pop of the Pastels, the Vaselines and Black Tambourine with startling precision. It all started in 2007 when the band came together specifically for the purpose of playing their friend Peggy Wang-East’s birthday bash (who just so happened to be the group’s super-cute key-boardist). The Pains might come off all innocent, cuddly and, uh, pure, but don’t let them fool you. They are razor-sharp stylists. Things don’t get any more nod-and-wink wink self-conscious than the single “Kurt Cobain’s Cardigan.” The tune is a loose, two-layered homage to the Vaselines’ “Son of a Gun” and Nirvana, who once covered the song.