Trending Stories from The Marquee
You are at:Home»Features»Ryan Bingham and The Dead Horses
By Marquee Magazine on September 1, 2009 Features, Interviews, Timothy Dwenger 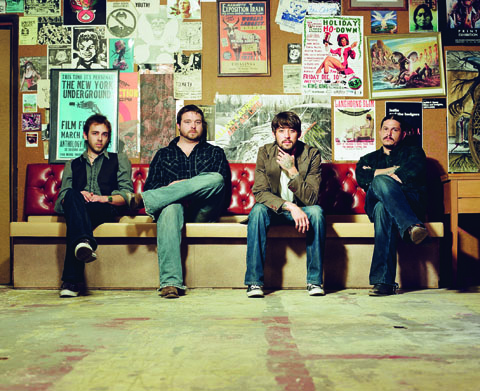 Based in the traditions of Johnny Cash, Waylon Jennings and Willie Nelson, Ryan Bingham and his band The Dead Horses, have married their version of outlaw country with the rawness of Bruce Springsteen, Albert King and The Black Crowes to create their own whiskey soaked brand of American folk music that appeals to everyone from good old boys to hipsters. To paraphrase the Osmonds, “It’s a little bit country, it’s a little bit rock and roll.”

Just over ten years ago Bingham was little more than a punk kid, bouncing around West Texas and New Mexico trying to stay out of trouble. It was during a few months in Laredo living in a rundown apartment complex where he came face to face with his future. “There was this guy who was living next door to me who would sit outside on his front porch and play his guitar in the afternoons,” Bingham told The Marquee just a few hours after returning from his honeymoon in Costa Rica. “I got to hanging out with him and listening to him play, and one day I went in and got this guitar my mother had bought me a few years before and went over and asked this guy if he would teach me a few chords. He taught me a few things and I was hooked. I have never really put it down since.”

One of the few things that this guy taught Bingham was an old mariachi song that stuck with him for a while. “He showed me this old song called La Malagueña and it was the only song I knew for about a year,” he said. “The reason I started writing my own songs was because I got so sick of playing that one song that I just started making up other stuff.”

One of the first songs that he wrote back when he was first putting pen to paper was “Southside of Heaven,” and the song is one of the reasons that Bingham attracted the attention of leading label in the world of alt-country, Lost Highway.

Shortly after signing with the label, Bingham realized that he and his band needed to get their collective act together quickly in order to make something of the opportunity they had in front of them. Knowing he couldn’t do it all on his own, he reached out to a relatively new friend, Marc Ford (former guitarist of The Black Crowes), for help.

Bingham had met Ford through another one of the happy accidents that have steered the course of his music career thus far. “Me and my drummer started heading out to L.A. from Texas and one of the first gigs we got was at the King King in Hollywood. There’s a girl in there named Karla Long that runs the place and I remember we called her up and she said, ‘Yeah, I can put you on Monday night at one o’clock in the morning. I don’t know if anybody will be here, but you guys can play for tips or whatever.’ We said, ‘That’ll be great,'”

Bingham laughed. “She was friends with Marc and he ended up hanging out there that first night we played. It was just her, Marc and a couple of other people, and after we got done with our set he came up to us and said he dug what we were doing. Over time, we became friends and while we were in town we started going into the studio and jamming on some things.”

It was those jam sessions that led Bingham to believe that Ford was the right man to mentor his band and when they got together to kick the project off, he realized he had struck gold. “It was like going through rock and roll school. Marc was the guy who really sat us down and was like, ‘All right guys, this is all fun and great and dandy but if we are going to record these songs we’ve got to get some kind of plan and play the songs the same way for at least a couple of takes so we can record them.’ He had a lot to do with structuring the songs and the parts that we were playing and keeping us from stepping on each other’s toes all the time and getting everybody to stick to their parts,” Bingham said.

The fruit of those initial recording sessions landed Bingham on “The Tonight Show,” “Late Night with Conan O’Brien” and finally, in February of this year, he was featured on the revered PBS live music showcase, “Austin City Limits.”

It has been a whirlwind ride for the former bullrider from New Mexico and it doesn’t show any signs of slowing down with the release of his most recent album Roadhouse Sun, which broke the Top 20 in the U.S. Country charts earlier this summer. “The TV stuff and the satellite radio has been incredible. I didn’t really realize how much influence that stuff had,” Bingham said. “We hadn’t really toured that much through the East Coast and we just got

back from up there about a month ago and had several soldout shows and great crowds everywhere. It was definitely a shock to go to those towns and start playing the songs and have people know the words.”

:: Ryan Bingham and The Dead Horses ::