Trending Stories from The Marquee
You are at:Home»Features»Fort Knox Five
By Marquee Magazine on October 1, 2009 Features, Interviews, Timothy Dwenger 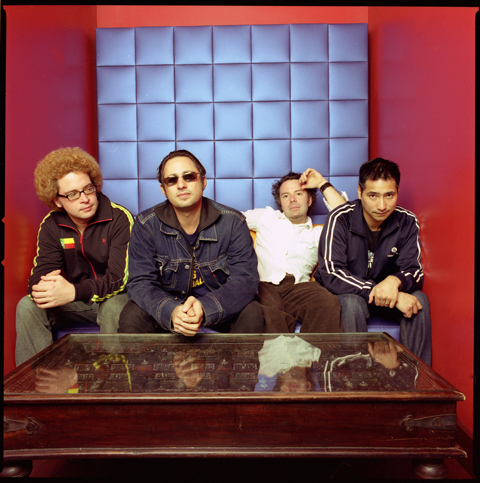 In the ’70s, the organic rhythms of funk music filled dance floors in clubs across the country with gyrating masses of sweaty partygoers who just couldn’t get enough of the deep grooves. Bands like Parliament-Funkadelic, Sly and the Family Stone, and The Meters followed James Brown’s lead and their bottom-heavy styles went on to influence the sounds of disco, house, hip-hop and many other genres. Though the funk craze subsided as metal and new wave took off in the ’80s, people have never lost the craving for primal music that makes them want to get out on the floor and move.

Enter Fort Knox Five. The group, made up of Steve Raskin, Jon Horvath, Rob Myers, and Sid Barcelona (which, if you’re counting, is only four members strong, despite their moniker), has been cranking out original and “reminted” dance-floor-ready masterpieces of electro-funk through their own Fort Knox Recordings label since 2003. In the four years leading up the creation of Fort Knox Five the group was recording as Thunderball for  Thievery Corporation’s label Eighteenth Street Lounge Music (ESL Music). “Thunderball was definitely more down-tempo, soundtracky influenced stuff and Fort Knox was started as a direct extension of that for the dance floor,” said Raskin when The Marquee caught up with him and Rob Myers, as they were getting ready to listen to a finished copy of their brand new disc The New Gold Standard 2 for the first time.

The album, like its predecessor The New Gold Standard (released in 2006), is a compilation that features artists from their label. “There is a connection between every one of the groups and Fort Knox Five. For a compilation, it is very coherent. Every group spills a little bit onto the other groups. We are all influenced by each other and collaborate with each other,” Raskin said. “The group Empresarios, for example, is our conga player Javier’s [Miranda] project. Rob [Myers] does International Velvet, and I do Speedy Consuela with my sister, my wife, and my brother-in-law. Each project allows us, to explore our own territory and have a home for it.”

One of the songs that is featured on the record is International Velvet’s cover of one of the legendary Gordon Lightfoot’s most beloved songs, “Sundown.” Though just seeing the light of day for the first time, the track was born nearly four years ago when Myers’ father was in the last stages of terminal cancer. “There was nothing that I could do for him,” Myers said. “He had introduced me to Gordon Lightfoot when I was a kid and that was one of my favorite tracks. I recorded it in the studio and it was the last thing he ever heard. The sincerity of the track is that it was never recorded for release; it was recorded for that purpose.”

While that track does carry with it a certain emotional weight due to its back story, the sitar laden, down-tempo tone of the track fits in well alongside the Latin and Caribbean rhythms that dominate the release. Of the four new Fort Knox Five tracks included in the set, the dance-ready “The Sax Pusher” stands out immediately and screams old school funk through the horn of Fort Knox and Thievery Corporation collaborator, Frank Mitchell. “‘The Sax Pusher’ is totally in the vein of classic Fort Knox; floor funk, organic R&B soul breaks,” said Myers. “It is funny because Frank laid down a one-take sax solo to ‘The Party Pushers’ [from the Fort Knox Five album Radio Free DC]that was incredibly good, but we only ended up using a few notes of it in the final mix because we just needed a little pop. So we had this solo that went on for 32 or 64 bars and we wrote the whole song around that one solo.”

While Frank Mitchell does get to play that solo live when they mount the full Fort Knox Five Live show (in the style of recent Thievery Corporation tours) for one-off gigs like the Earthdance Festival in California, when they invade Colorado later this month they will perform in what they call their “2×4” formation. “Jon and I are the principle DJs with Fort Knox and we’ve been doing our 2×4 thing, 2 people with 4 turntables, for all the festival shows and stuff like that for the last couple of years. It’s pretty great because, while it’s a DJ set, we are really building and rebuilding songs in a live context. We play a lot of our own acappella and instrumentals mixed in with mash-ups and stuff like that,” Raskin said. “Having said that, we have also been incorporating visuals into our set as well and it’s all tied together. We’ll be DJ-ing, VJ-ing and playing a couple of little MIDI trigger keyboards all at the same time. It’s what we call the ‘mini-live’ performance.”

Though it’s been updated and modernized with cutting edge technology, the Fort Knox sound has been obviously and profoundly influenced by the forefathers of funk. Both their full live performance and their  “2×4” lineup delivers a powerful set that is guaranteed to keep the dance floor gyrating until the last beats fade away.

Recommended if you Like:
• Thievery Corporation
• All Good Funk Alliance
• Kraak and Smaak