Trending Stories from The Marquee
You are at:Home»Album Reviews»AA Bondy
By Marquee Magazine on October 1, 2009 Album Reviews, Jonathan Keller 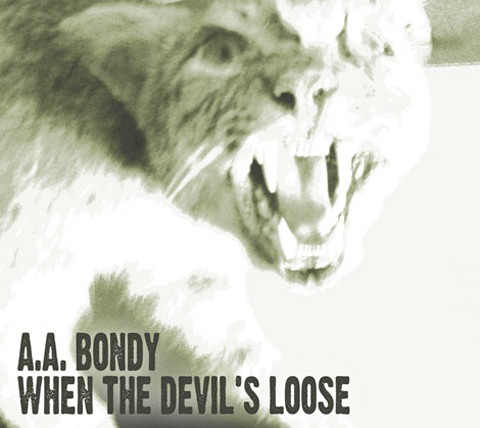 Like the blues legends of the Delta’s past, Scott Bondy goes by a stage name: A.A. Bondy. With this alter-ego, alphabetically just ahead of B.B., Bondy has begun to make a name for himself as a singer/songwriter holding onto the values of backwoods Americana. His second studio effort, When The Devil’s Loose, is a majestic collection of songs and moods that should solidify Bondy’s place on the fringe of the mainstream.

In the late 1990s, Bondy fronted the alternative rock band Verbena (Dave Grohl produced their 1999 major-label debut), and after the band faded into post-grunge oblivion, Bondy branched out as a solo act. On his own, Bondy dropped the distorted electric guitars for the acoustic and took a simplistic approach to his folk-inspired music, executing two near-perfect releases: 2006’s fully acoustic Hand-Made EP, which he sold only at live shows, and his grandiose debut full-length album, 2007’s American Hearts. The most striking thing about Bondy’s first two efforts was how his maturity showed — not only in his songwriting but in both his vocal delivery and acoustic guitar accompaniment. He seemed and sounded wise beyond his years and his third release, When The Devil’s Loose, will only add to his cult-like reputation.

On the album opener “Mightiest of Guns,” Bondy’s words float gently through his rolling finger-picked guitar: “The shadows go like ghosts across your room / take the world and burn it in a spoon / a mercy ship to sail you off to sleep / to where the crimson angels swim the deep / there’s no hiding from the mightiest of guns.” Clearly, Bondy isn’t writing your average introspective love song that most singer/songwriters revert too.  Instead, Bondy explores the consequences of drug use, the bright side of loneliness and the beauty often overlooked in everyday life.

Recorded with only bassist Macey Taylor and drummer Paul Buchignani accompanying Bondy’s gravelly voice and guitar, When The Devil’s Loose carries an intimacy which is often overlooked in today’s overload of multi-tracked indie rock and electronic gadgetry. The simplicity of the instrumental arrangements makes Bondy’s songs shine as they should — in the beauty of the melody and lyrics. The album’s title track, the piano-driven “On The Moon,” the infectious verse of “I Can See The Pines Are Dancing,” and the heartbreaking optimism of “A Slow Parade” are just some of the examples of why this album should be given proper attention. I promise it will be worth the listen.