Trending Stories from The Marquee
You are at:Home»Dan Rutherford»Cobra Starship
By Marquee Magazine on October 1, 2009 Dan Rutherford, Features, Interviews

Cobra Starship kills the afterburners to witness its 15 minutes 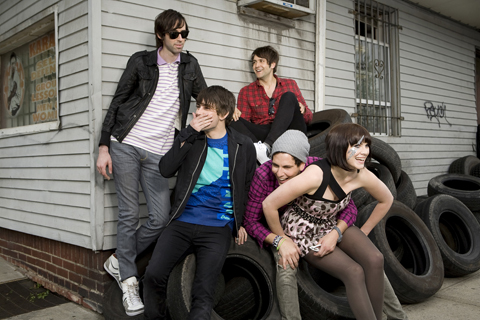 If you’re a fan of pop-punk you undoubtedly have an opinion of Cobra Starship and frontman Gabe Saporta.

Over the past decade Saporta’s musical endeavors, public persona, and sometimes questionable, over-the-top antics have allowed him to teeter-totter on the brink of pop-culture fame and infamy.

Once revered by emo kids for his leadership of the influential act Midtown, that undying love took a drastic turn among hardcore fans and the internet community after the creation of the dance punk project, Cobra Starship.

Until this summer, Cobra Starship was primarily known for the closing credit anthem “Snakes on a Plane (Bring It!),” from Samuel L. Jackson’s 2006 film Snakes on a Plane. Many critics considered it a perfect fit, matching the undeniably campy blockbuster with an act who’s only recorded material was a parody of Gwen Stefani’s “Hollaback Girl,” and had never played a single live show.

As the track’s popularity quickly swelled Saporta assembled the Cobras, Ryland Blackinton, Alex Suarez, Nate Novarro and the latest addition, Victoria Asher, to help provide the solution to what he found missing in the music scene — unbridled fun — and to ruffle as many feathers as possible over the last three years.

Saporta wears his “too cool but silently giggling to himself” attitude like a merit badge on his trademark purple hoodie. He’s learned if you can’t make fun of yourself, and accept the hate with the love, you’ll never make it in the music industry and lives by this message when it comes to Cobra Starship.

The band’s nonsensical biography carries that same tongue-in-cheek tone, claiming that while wandering in the Arizona desert Saporta was bit by a snake and when he was revived he was actually being nursed back to health by a talking cobra, who gave him a simple message, “Teach hipsters to not take themselves so seriously and telling emo kids to stop being pussies,” Saporta said in a recent tell-nothing, convoluted and difficult interview with The Marquee.

With his mission clearly defined, the self-proclaimed pop culture junkie has resurrected some of his favorite things from the 1980s and made them relevant to a growing fan base most of whom had not been conceived during said decade. From the band’s borderline nauseating neon merch, slap bracelets and spandex to the band’s ironically titled album, Hot Mess, the project continues to show it’s more about entertaining, inside jokes and partying, than writing the next Kid A.

Not unlike the first two Cobra Starship records, the band sticks to their now proven formula for their latest release — sarcastic, but relevant lyrics, plus driving tracks that make even the most uncoordinated person shake it, plus well placed cameos from famous friends equals a hit.

This outing marries high-profile collaborators like Gossip Girl’s Leighton Meester, Pete Wentz, and rapper B.O.B with writer/American Idol judge Kara DioGaurdi, super producer Kevin Rudolf (Lil Wayne, Justin Timberlake) and a small army of other established producers, proving the band and its labels, Fueled By Ramen / Decaydance, were obviously swinging for the fences on Hot Mess, and they did not disappoint.

Only someone with immeasurable snobbery or possibly tone deafness would say Hot Mess lives up to its title. Fans and critics alike have jumped behind the release that debuted on the Billboard charts at number four and while the record has some hiccups, like “Living In The Sky With Diamonds,” the band delivers a wealth of radio-ready tracks, making it their most complete body of work to date.

Tracks like “Pete Wentz Is the Only Reason We’re Famous” and “You’re Not In On the Joke” epitomize Cobra Starship’s original mission, poking fun at the army of dissenters who troll the internet and those who are simply too self-absorbed to relax and cut loose.

When the band hits the Ogden Theater with Boys Like Girls, The Maine, A Rocket To The Moon and VersaEmerge, don’t expect a performance rivaling Pink Floyd’s The Wall, but if you’re in the mood for a sweaty dance party, sing-a-long choruses, and being harassed by underage girls searching for someone to buy them Tuaca bombs, it will undoubtedly be a show you can’t miss. The band is approaching its peak and better to catch them before they move up to larger rooms.

If Cobra Starship is not your cup of tea or you’re quietly counting down until their fifteen minutes of fame is up, Saporta and the band suggests you simply “Kiss their Sass.”

Recommended if you Like:
• Fall out boy
• All Time Low
• Paramore