Trending Stories from The Marquee
You are at:Home»Features»Head For The Hills
By Marquee Magazine on October 1, 2009 Features, Interviews 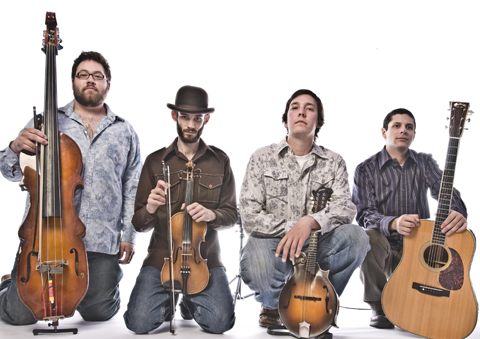 At the dawn of their sixth year as a band, Head For The Hills has climbed up through the ranks to become one of the most notable success stories in the Colorado bluegrass scene.
The quartet is putting the final touches on their second album, and if their momentum continues, the band will end up having a superior view from their position on top of the bluegrass hill.

For this new album, produced by Leftover Salmon’s Drew Emmitt, the band members took a different direction than their debut release, Robber’s Roost. “We definitely made a conscious effort to get away from the Pro Tools, isolation booth and headphone model, which pretty much dominates. There is nothing wrong with that, but after that first album of being in different rooms with no sight lines, we wanted to take a new approach,” said mandolin player Mike Chappell. “ Some of the tracks were recorded completely live,” he added.

But, while the band is shunning one type of technology and method of recording, they’re embracing another, and it’s one that some say could bring recordings back to what they were before the digital age.

Bassist Matt Loewen explained, “Our engineer Jake Wargo met this guy Gus Skinas and he works with this DSD (Direct Stream Digital) technology which is a different format of recording than on analog tape or recording onto Pro Tools on a computer like most people do. It’s higher fidelity and has a high sample rate. Sort of hard to explain but it just sounds a lot better,” he summed up.

What his summation glossed over, however, is the fact that Skinas (who helped Sony originally develop and pioneer digital audio) has created a multi-track recorder/editor, known as the Sonoma System, which restores the warmth of analog that is typically lost in digital recordings. The sound isn’t just a little better, but is a remarkable difference that even untrained ears can easily pick up on.

But, in addition to recording processes and Skinas and his technology, the group has also assembled an all-star cast to perfect the album. “Using this format of recording — to have multi tracks to do it live — there hasn’t been a lot of that done,” Loewen explained. “The engineer that we are bringing in to mix the record is this guy Vance Powell who just won a Grammy for best engineered record for the Racounteurs. He just mixed that album, he did not record it. Vince has the Grammy and Gus is the guy that has remastered some of the world’s best albums for Super Audio CD.”

With all of the knob turners in place, the next step was getting the musicians rounded up and Chappell explained that the album was recorded under the careful watch of some local jamgrass heroes. “We did it at Billy Nershi’s studio. Billy ended up being more involved and gave us some guest vocals and a background guitar part out of him,” Chappell said. “Drew (Emmitt) played on the album too.”

In fact, there is a slew of notable special guests and friends who appear on the album. “James Thomas did a grand piano solo and we had Anders Beck from Greensky Bluegrass play dobro and lap steel,” said fiddle player “Sloppy” Joe Lessard. “There is some good diversification in the instrumentation.”

Lessard went on to explain that every part of the album, even songs not written by the band, have the Head For The Hills style stamped on them. “I would say that we still focus on having pretty much entirely originals and we make sure that if it is someone else’s tune on our record that we are going to do the arrangement and we are going to put our spin on it and make it ours,” Lessard said.

As the band continues to grow their name locally, they have also set their sights outside of Colorado and this summer they did some of their most extensive touring. “We traveled a bunch this summer. With the exception of a trip to Bristol, Tennessee, we haven’t really gotten east of the Mississippi. But this summer we did a big loop around the West through Montana, California, and Utah,” Loewen said.

This month the band will be hosting their own festival near Fort Collins. “Imagine Harvest and Festival just mashed together!” Loewen said. “Harvestival at Grant Family Farms is going to happen on October 10. Otis Taylor is also playing, as is David Grisman, and then we close out the night.”

Chappell concluded, “It is just so cool what we are doing now and I think that we are all really excited about it. We are doing something new and I like that — raising the bar from the level we were at, even maybe three months ago.”