Trending Stories from The Marquee
You are at:Home»Features»Paper Bird
By Marquee Magazine on October 1, 2009 Features, Interviews 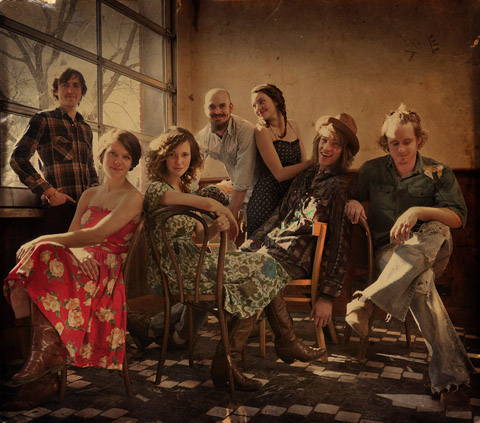 Paper Bird is arguably Denver’s hottest up-and-coming folk/Americana/bluegrass septet, which might not sound like such a big deal — but has some industry insiders whispering that this could be Colorado’s next breakout band, joining the ranks of mainstream hit-makers 3OH!3, the Flobots, and the Fray.

All of the members are in their early twenties, and have only been playing together since 2006. But despite the relative youth of the band, the music that the seven members make when they get together sounds like it could have come from a Depression-era jukebox — not that there’s anything depressing about this jovial, harmony-laden music. In fact, it’s quite the opposite.

Perhaps taking a cue from the title of the band’s first full-length album, Anything Nameless and Joymaking (2007), Paper Bird’s music is as uplifting as grabbing onto a giant bunch of helium-filled balloons, as American as apple pie, and as hard to classify as, well, something really, really difficult to classify. A little bit bluegrass, a little bit folk, and a little bit Americana, with elements of jazz and a couple of horns thrown in for good measure, Paper Bird truly makes a joyful noise that is all their own.

The band’s unique sound may have something to do with the seven band members’ eclectic influences. “The Patterson girls, Genny and Esme, grew up listening to a lot of Motown and Stax-style soul — Al Green and stuff,” said guitarist Paul DeHaven, who The Marquee recently caught up with in Boulder. “Caleb listens to lots of reggae. There’s also some hip-hop in there. Macon listens to a lot of Frank Zappa and weird jazz stuff. Tyler used to play jazz, and I used to play jazz as well, so there’s a lot of that in what we listen to. We all love a lot of the usual stuff: The Beatles and Bob Dylan and Radiohead. Then, there’s a lot of stuff we don’t agree on as well.”

However, the band, which is made up of DeHaven, Tyler Archuletta (trombone), Caleb Summeril (banjo), Sarah Anderson (trumpet and vocals), sisters Genny and Esme Patterson (vocals), and newest addition Macon Terry (upright bass), shows no sign of discord, musical or otherwise, when on stage. Paper Bird is known for its polished performances, with the three female members harmonizing nimbly while appearing impeccably dressed and coifed, usually in dresses or skirts, and the four male members functioning as one in the cohesive rhythm section.

Rumors have recently been swirling about the band changing its name, or possibly allowing fans to vote for a new name, but DeHaven put the brakes on this piece of gossip. “Let’s just not even talk about that,” he said. “We were considering it for a while, but not anymore.”
The band came together in a happy accident in 2006, when the members (minus recent addition Terry) headed to the mountain town  of Breckenridge “with paints, instruments and the idea that we were going to climb a mountain,” said DeHaven. They never wound up doing much painting or mountain climbing, but instead began playing music together for the first time, and within a few hours had written four original songs. The six friends took their new music to the streets, earning a few hundred dollars and an offer to play their first gig, which took place that night in a local coffee shop. Thus the band that would become Paper Bird was born.

The follow-up to 2007’s full-length, The Sky Underground EP was released this June and a new live EP is set for release on October 6, 2009. The live EP was recorded at a recent in-store appearance at Twist N Shout in Denver. It consists of one new song and six old songs, and marks the first time the older songs have been recorded with a bass player.

The first EP and full-length were released on the band’s “quasi-label, collective thing that we started called Longspoon,” said DeHaven. “Caleb, myself, our friend Laura Goldhammer and our friend Twelve had the idea that there was a lot of really great music coming out of Denver and Boulder and we wanted to have an outlet for all that music to start to blossom, and to be able to help each other out. When one band is doing well, there are resources available for everyone else. We put together a compilation album about a year ago, with artists like Laura Goldhammer, Ian Cooke and The Wheel. We’ve been hand-making our albums since day one.” Fans lucky enough to snag a copy of Paper Bird’s full-length anytime before 2009, as well as the first 100 people to pick up The Sky Underground EP, were treated to hand-made fabric cases, yarn appliqués, and crayon and colored pencil drawings done by none other than the band members themselves. Band members also hand-stitch T-shirts and other merchandise and do all poster and album artwork by hand.