Trending Stories from The Marquee
You are at:Home»Features»Savoy
By Marquee Magazine on October 1, 2009 Features, Interviews 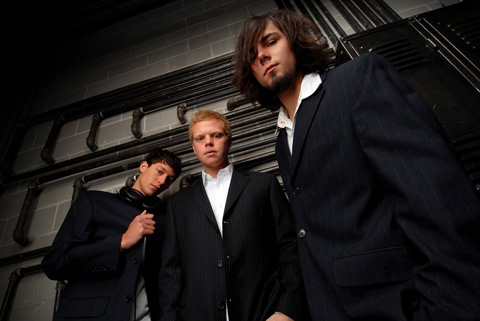 This trend of electronic beat building, occasional “whomping,” and spontaneous “knobbing” has taken over the Denver and Boulder area. This might have something to do with the mass production of electronic music and new age bands emerging from house parties. The local Boulder boys of Savoy were a part of those underground house parties and maybe that’s why their live show reenacts those same college parties.

House parties are made up of music, girls, and dancing; then whatever the attendee decides to partake in is up to them. The same basic components are applied to a Savoy live show: one giant dance party. “We try to do our own thing, by throwing a big dance party. We’re not afraid to go hard and push the energy of the floor,” said drummer Mike Kelly in a recent conversation with The Marquee on the porch of a local Boulder residence.

All three members of Savoy attended the University of Colorado and have spent their college careers as many students do — trying to have a good time. But when they were in school, the scene around Boulder was a lot different than it is now. “When we went to school our scene was more of a jam-orientated electronic scene,” said Kelly. “As far as our music is concerned, we wanted to take it to the next level and bring it hard, throw down, and throw a party more or less.”

Boulder is, by far, producing and leading the way for this electronic revolution. With bands like Pretty Lights, Pnuma Trio, and Big Gigantic all making waves around Boulder, Savoy stands proudly on their own six feet as one of the bands leading the laptop revolution.
With two DJs, Ben Eberdt and Gray Smith, and Kelly on drums, Savoy adds an interesting twist with live musicianship. “We didn’t want Savoy to just be DJs and we liked the aspect of having actual drums and a drum beat in our live shows,” Kelly said.

And Savoy also distinguishes themselves with their harder hitting remixes and their original “whompers.” “We like to go with a more European-type of build and we put a lot of time into our builds, since they gets the energy going. Then when the beat drops, the place goes nuts,” said Kelly.

The process of remixing a song, according to Savoy, is as unique as the finished product itself. “The most important component of a song is the hook, and being able to create something based off of that hook. I produce a basic drumbeat that is overlapped with the song, and then Ben and Gray add the twists and knobs. The drums are then re-worked to improve the beat, and typically more of a complicated, intricate sound than we started off with,” Kelly said.

The three boys making up Savoy were once just common college students, skipping classes and forgetting about homework. But with relentless social networking, the band has grown exponentially to a nationwide fanbase, and taken the former CU students, who used to attend shows at the Fox Theatre, to having their own headlining gigs there.

With every house on Boulder’s infamous “Hill” blasting Savoy’s new hit “Jamrock Remix,” it makes it very hard to not like them.

Kelly said that the band has been blown away from that response, locally and nationally. “It’s really cool to go to a venue you’ve never been to before and find out it’s sold out — you know, when the majority of the crowd has never seen you live, and the place goes crazy,” he said.

Speaking of crazy, Savoy has been preparing for the release of their debut album later this month, full of new fresh remixes and brand new original head bangers; and with actual product to go around, it’s possible that this debut could make the band’s following grow even further.

“Our first album is special for us, and we’re really excited to throw down a bunch of new songs that we have been working on for a while and keeping them secret,” Kelly said.
It’s an amazing evolution that Boulder has gone through from the time Savoy’s members were in school, when bluegrass and jam bands ruled every weekend at local venues. But with this release the band, and for that matter the Boulder scene, is writing another chapter in the storied music scene of the area — a story that will continue to meander and change regularly, with twists and turns every so often to keep everyone guessing.