Trending Stories from The Marquee
You are at:Home»Features»Blind Pilot
By Marquee Magazine on November 1, 2009 Features, Interviews, Timothy Dwenger 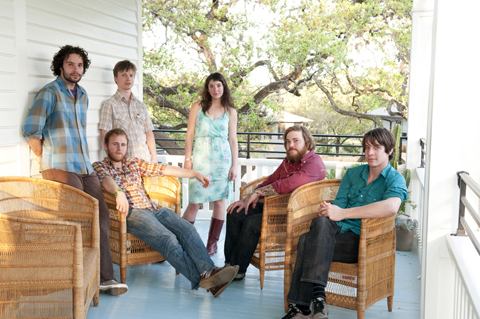 In the summer of 2005, two friends packed tents, clothes and guitars into little homemade trailers, hitched them to their bicycles and set out on an adventure that was meant to be nothing more than that — an adventure. Starting out in Vancouver, B.C., guitarist Israel Nebeker and drummer Ryan Dobrowski dubbed themselves Blind Pilot and began pedaling their way down the coast, stopping to play music every night for anyone who’d listen. In their eyes it was the perfect summer vacation. Little did they know that it was the beginning of something much bigger.

Their hook-filled blend of folk and pop attracted listeners from many walks of life and it wasn’t long before the duo realized that they were on to something. They pooled their meager resources and found a friend of a friend by the name of Skyler Norwood, who was willing to record the songs that became the band’s debut album, 3 Rounds and A Sound, for next to nothing. With Norwood’s help the project expanded rapidly and soon the Blind Pilot sound included bass, horns and vibraphone, among other instruments.

Shortly after the release of the album, the track “Go On, Say It” was featured as a free download of the week on iTunes and shortly thereafter became a favorite of NPR. Since then, they have made the decision to leave their bikes at home and criss-cross the country in a van to play to throngs of adoring fans in sold-out clubs and at massive festivals like Lollapalooza and Outside Lands.

When The Marquee caught up with Nebeker backstage at the Rocky Mountain Folks Festival in Lyons this past summer he seemed to still be getting used to the idea that his band had really taken off. “We were really into the idea of just getting out of the Portland scene to play in really rural towns all down the West Coast. We wanted to see how our music did and have a fun summer. It was by far the best project that either of us had been in so we just continued it,” Nebeker said. “Ryan and I get along really well musically and we have a similar vision and it was totally fun, minus all the ‘We gotta get big time and do this and that.’ We just went out and played for whoever listened down the West Coast and it was great.”

On that first trip the duo only made it as far as San Francisco because their bikes were stolen but they have since completed another bike tour (with several other musicians), where they made it from Bellingham, Wash. all the way to San Diego, Calif. On both tours they set up a few gigs in advance in some of the bigger towns they were passing through, but frequently they booked gigs upon arrival in a town. “We played anywhere that would have us,” Nebeker said. “We would roll in to a town of less than a thousand people and ask, ‘Does anyone ever play shows here and where is that?’ We’d go there and they’d say, ‘You can set up and play if you want. We’ll go tell our friends.’  Those turned out to be some of the greatest shows ever. They were totally spur of the moment.”

“One of the greatest shows we did was in Humboldt and there was this group of truck drivers who were across the street from this place where we were camping,” he said. “They were these big burly dudes and they were like, ‘What are you guys doing? What’s up with carrying instruments on your bikes?’ When we told them they said, ‘Well, get ’em out and play for us.’ They called their trucker buddies and they came out and listened and the kids who worked harvesting pot called their friends and it was this weird mix of a crowd but they were all into it right there on the porch of a general store.”

The excitement in Nebeker’s voice underscored the fact that it is moments like that which made it all worthwhile for Blind Pilot. He is thrilled that the project has grown into what it is today, but staring out the window of a van just isn’t the same as being out on the road on a bicycle. In fact, Nebeker isn’t sure what the timeline is like for a new Blind Pilot record, as he and Dobrowski haven’t had much time to write while cooped up with the rest of the band. “We were able to write a lot better when we were doing the bike tour, it was a lot more inspiring than the van. Next time we have some time off I’ll go home to the coast or somewhere kind of isolated and write,” Nebeker said. “3 Rounds and a Sound was pretty much made up of songs that I wrote in my bedroom and wasn’t even sure that I would play for anybody, ever.”

The time off that he speaks of may be way off, as the band is in the midst of a lengthy headlining tour with like-minded bands The Low Anthem and Laura Viers & The Hall of Flames that takes them through early December. Hopefully, if Nebeker gets his wish, the band will have some time off over the holidays to write and recuperate before the next phase of the process begins. In the meantime, he is content daydreaming about his bike while rolling down the open road with the rest of his bandmates in their van. “We would love to do another bike tour. I’m planning on it,” he said.  “There will probably be some down time before our next album comes out, so maybe we’ll do it then. We were able to do a small tour in Europe recently and I think that might be where we go. I started calculating the miles and we could go from Sweden to southern Spain and it would be fewer miles than the west coast of the U.S.”

Recommended if you Like:
• Iron and Wine
• Great Lake Swimmers
• Bon Iver