Trending Stories from The Marquee
You are at:Home»Brandon Daviet»GWAR
By Marquee Magazine on November 1, 2009 Brandon Daviet, Cover Story, Features, Interviews 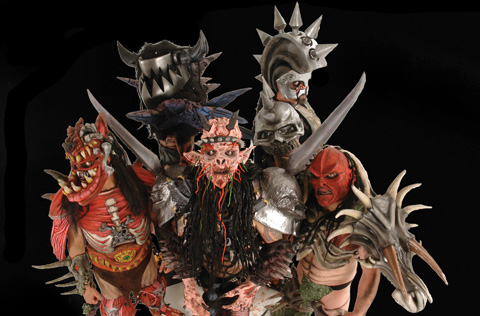 In many ways, GWAR’s career plays out like an intergalactic version of “Celebrity Rehab” crossed with the pages of Marvel Comics, albeit with a slightly more perverted tone. Not a day goes by when the group doesn’t find themselves embroiled in conflicts and adventures that should grace the tabloids in every known star system.

And with the late-summer release of their album Lust In Space those tabloids are really starting to take notice. In recent months GWAR has found themselves getting more press than a summer blockbuster, more ladies than Wilt Chamberlain, and more gigs than a hippie jam band on a never-ending tour.

For those who are not familiar, the Richmond, Va.-based metal band lives in a false reality they’ve created, which essentially states that the space beasts of GWAR came to Earth eons ago, had sex with the apes and created the human race. They wear over-the-top costumes, have live shows that involve dousing their audiences with blood and other boody fluids, and rarely, if ever, break character. But despite the gimmicky, comedic nature of the band, the group actually does play quality metal — quality enough to earn them two Grammy nominations and sustain them for the last two-and-a-half decades.

Recently GWAR singer and band master Oderus Urungus — whose mortal name is Dave Brockie — graced The Marquee and the band’s faithful masses with GWAR’s current designs for us earthlings, in an interview where he never once spoke as Brockie, but maintained his character throughout. “I bet you were thinking, ‘That asshole isn’t going to answer again,’” said Urungus with an unapologetic laugh as we launched into our interview. The comment came on the heels of an afternoon of phone tag between myself and the singer that finally ended when Urungus dodged the noise of the band’s sound check and took refuge in the relative quiet of the Newport Music Hall’s public urinal so he could “devote the proper time and energy” to our conversation. Of all the crack heads in the universe, Urungus is one of the few that’s incredibly proud of he and his bandmates’ use of the rock, and he explained that recently the band has had to go to the depths of space in an attempt to save their favorite drug. (Note: At this point I would suggest readers Google GWAR’s history if they get confused, or carefully listen to the lyrics of Lust In Space to understand the mythology involved in GWAR.)

“Well everything was going fine. We were partying back in Antarctica when all of a sudden this Scumdog warship shows up on our front porch piloted by this Sawborg Destructo asshole. Well, we stole the ship and went back into outer space only to find that our ancient enemy Cardinal Syn had conquered most of the universe and had stamped out crack cocaine in outer space,” said Urungus with a displeased tone. “He turned all of our favorite planets, like ‘Metal, Metal Land’ into really crappy ‘Chocolate dumpling by the water fall with fuzzy little animals-ville’ and that’s really horrible. So now we’re on a quest to destroy Cardinal Syn because, basically, the only place that’s left where we can have any fun is Earth — the very place we have been trying to get the fuck out of for all these years. Now, this is the only place we can find crack!”

In addition to Cardinal Syn’s transgressions, the band hit another roadblock when they searched out their former commander Zog to help with their assault (Again, Google it or listen to the lyrics). “One of the first things we wanted to do was find Zog, see what kind of war he was involved in, and we find out that he had become a homeless crack head working an intergalactic truck stop squeegeeing space barge windshields, so, as you can hear on our new album, he had to be disintegrated,” said Urungus.

Of course, the new album that Urungus speaks of is Lust in Space. Not only is the disc a fine slab of metal that would make any earthly band jealous, the album’s release also marked the start of celebrations in honor of GWAR’s 25 years of subsidizing their various Dionysian pursuits by making music. The album and current tour are only the beginning of the festivities planned for their loyal “Bohabs.”

“GWAR’s actually putting out a fucking special colored vinyl single for Christmas as a special present to the human race and I believe there is some hulking box set in the works. Basically, the idea is to put out as many fucking products as possible over the course of the twenty-fifth year anniversary which we decided to go ahead and make two years now, only so we could party for an extra year and so we could get the 25 year stamp on as many products as possible,” said Urungus unashamedly about the band’s marketing strategy. “A lot of people say 25 years is a long time but for GWAR it is just the blink of an eye, there could be five hundred, six hundred albums before we finally get the mass media acceptance that we really don’t give a shit about.”

While GWAR has by no means changed their hedonistic ways, the earth’s populace has seemed to warm up to them at least a little. Urungus recently landed a recurring role as a panelist on, of all places, the Fox News channel program “The Red Eye.” No, that’s not a typo. It actually says Fox News — the notoriously conservative, George W.-loving, Obama-hating, Republican “news” station.

How a space beast and metal lord could land a gig on Fox is a riddle wrapped in an enigma, but Urungus said: “Let’s put it this way, the pressing of the flesh has gone to a whole new level. Basically, I will have sex with anyone possible at Fox to ensure my job. Every week I expect to get fired and every week they give me more money, so I just don’t understand what is going on. Who would have ever thought that Fox, this supposed conservative network, would be the first major network in many, many years that had the intelligence and intestinal fortitude to give Oderus not just a fleeting appearance on T.V., but a role in investigative journalism. I mean, Geraldo look out, Oderus Urungus, War Correspondent. I can see it now.”

In that role, Urungus has been hysterical, simply killing it with each appearance and has even gotten in such digs as, “I haven’t seen a collection of degenerates and weirdos as vast since the last Republican convention.” Again, taken out of context, it might all seem like some gimicky shtick, but once you are in on the joke it’s pretty damn funny.

In the end, I think there is a lesson to be learned from GWAR — not every womanizing, occasionally homosexual, drug addicted alien is an idiot and Urungus himself seemed to agree as we wrapped things up. “It’s the classic ‘pearls before swine’ syndrome. Seldom do you run into a human that has any kind of education or appreciation for the deeper and finer truths of GWAR,” said Urungus. “It is easy to mistake GWAR for a bunch of brutes but the more discerning and perceptive humans have caught the clues and the hints and in some cases instructions and have followed along as they see fit. We like to remind the human race that they were created by GWAR having sex with apes and … everything cool or horrible that you have ever done was because of us.”