Trending Stories from The Marquee
You are at:Home»Album Reviews»Monsters of Folk
By Marquee Magazine on November 1, 2009 Album Reviews, Jonathan Keller 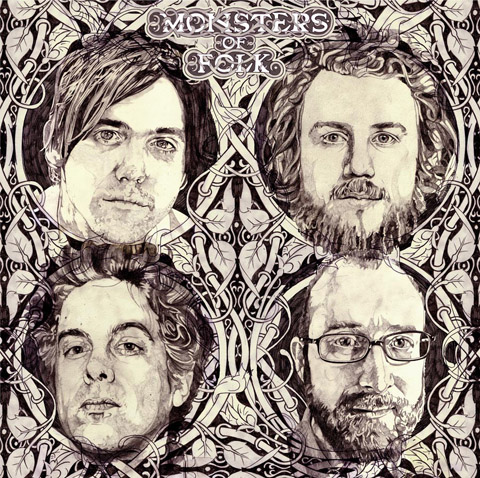 When I first heard that Jim James (My Morning Jacket), M. Ward and Conor Oberst (Bright Eyes) were getting together to record an album with producer Mike Mogis (Bright Eyes, Sea Wolf) I have to admit, I kinda moaned out loud. I have enjoyed all three musicians as solo artists and with their various full-band projects. I also consider all to be tops in the art of songcraft; they are the cream of the crop. However, their self-titled debut album is simply an experimental collection of b-sides without much cohesive direction. Yes, there is a lot of novelty in this project and yes, there are some great moments, but this is not the “supergroup” album one would expect from this bunch of established crooners.

Monsters of Folk originally formed back in 2004 when each member was on a collective tour with their respective bands and solo projects. The tour was very loose (in terms of the artists’ access to each other) and a lot of time was spent jamming both on stage and backstage. They hit it off. The late-night backstage jam sessions have since become legendary and from those jams a mutual respect was formed and the seeds of some songs that would eventually become Monsters of Folk songs were planted. Even though each member had prior agreements to tend to over the next few years, they did agree to reconnect in the future. Staying true to their word, they delivered their 15-song self-titled debut album last month.

My main problem with Monsters of Folk is there is very little real collaboration between the three artists, at least in the recorded performances of the songs. James, Ward and Oberst each have three of the most distinct voices in popular music and I would have liked to have seen more vocal interplay and verse swapping on the album. The opening number “Dear God (Sincerely M.O.F),” which could have been an “Evil   Urges” outtake, sets the stage of what the album could have been. The song is clearly driven by James, with his falsetto intro, refraining harp and electronic percussive backdrop. What makes the song work is that James sings the first verse, leaving the second verse for Ward and the third for Oberst.   The Ward-led “Baby Boomer” is another great example of this vocal interplay.

On most of the other songs, each artist takes the lead on their respective track and the others are present only for instrumental accompaniment and background vocals. A clear song leader, so-to-speak, is established on each track. James and Oberst lend a heavy country influence to the album and the James-led “The Right Place,” sounds like something Gram Parsons would have been happy to cover.

Oberst’s two best tunes on the album are “Ahead of the Curve” and the mandolin-driven “Man Named Truth.” The album sleeper surprise for me is Ward. He adds an edge and contributes four great songs, including the above mentioned “Baby Boomer,” “Whole Lotta Losin’,” the rag-time sounding “Goodway,” and the most beautiful track on the album, “The Sandman, the Brakeman and Me.”

Fans of these three artists are bound to find something on this album they will love, however, the sum of all three does not equal something greater than each individual. After all, they made it on their own strengths to begin with.