Trending Stories from The Marquee
You are at:Home»Features»Playing For Change
By Marquee Magazine on November 1, 2009 Features, Interviews, Timothy Dwenger 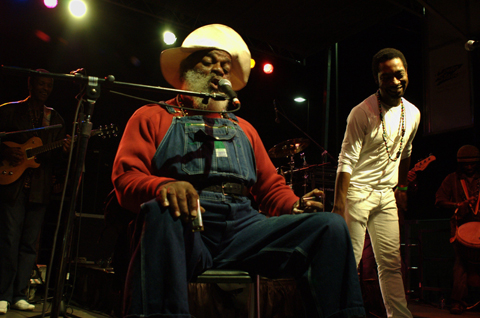 How many times have you been walking down the street or through a bus, subway or train station and heard music that pulled your mind out of your every day thoughts and made you stop and listen? It might have been a mournful sax tune, deft fingers plucking out a familiar melody on the strings of a nylon guitar, or a kid drumming on the bottom of a plaster bucket, but whatever it was, it caught your ear for one reason — because it was unusually good.

While there are millions of people who hear this kind of music every day and are lucky enough to have it change their lives for a minute or two, about 10 years ago recording engineer and producer Mark Johnson heard two monks in a New York City subway station and it changed his life forever. “One of them was playing a nylon guitar and the other one was singing in a language that I didn’t understand and I imagine most people didn’t understand. On this day I saw about 200 people just stop and honestly nobody got on the train and everybody was just watching these monks,” Johnson told The Marquee during a recent interview on the eve of the first date of the first Playing for Change tour. “I just looked around during this performance of the most beautiful music I had ever heard and saw people crying, and jaws dropping. Then I got on the train and I went to the studio and it occurred to me that the best music I ever heard in my life was on the way to the studio and not in the studio. I think that was supposed to be some kind of message for me. Music and art are just moments in time that can exist anywhere. That was the day I realized that I wanted to search for those moments.”

As the moment on the subway platform marinated in his head, Johnson realized that most of the high end equipment that he had access to in the recording studios he worked in was portable. It wasn’t long before he had put together a mobile recording studio and made the decision that he would set out on a globe trekking adventure with the intent to record musicians that he encountered along the way. “I realized that I could have them all play on the same songs as I traveled and show people the power of what we can all do if we work together in a positive way,” explained Johnson.

Johnson’ first project was focused around the Ben E. King song “Stand By Me” and as he set about trying to recruit musicians to participate in the project he realized that the vision he had in his mind was not one that others grasped easily. “Without the iPod video I would have gotten nothing done,” Johnson said with a chuckle. “I could try to explain what I was doing but either nobody would understand me or they wouldn’t believe me. Then, when I could show them where the video of ‘Stand By Me’ was, at that point, the result was incredible.”

Clarence Bekker, a Dutch musician who is featured in the video, echoed Johnson’s feelings when The Marquee caught up with him by phone from Washington, D.C. “I would tell you that I didn’t have any idea what he was talking about as he tried to describe it to me for the first time. I got the idea that he was going around connecting musicians together and I could imagine a documentary of all these musicians together, but when I saw the first footage of ‘Stand By Me’ it was like nothing I had ever come close to thinking about. It was absolutely, absolutely brilliant,” said Bekker.

As the project progressed and Johnson continued to show the work in progress to musician after musician, he realized that not a single person had turned down his offer to participate. It was very clear to him that he had hit upon something special. “The beauty of music is the universal language. I mean it is like cliché to say it, but whoever said it first is right. We are just excited that we can take people from all over the world who believe in the power of music and unite them together and actually create something stronger.”

Almost as soon as the video hit the internet in November of 2008 it became a viral sensation, accumulating more than 30 million views to date. This gave Johnson another idea and from the long list of musicians he had come in contact with over the course of his travels, Johnson assembled a 10 person live band that embodies the spirit of the Playing for Change mission. “The way I would describe these people is that they are music. It is at the core of who they are as people. They play music to survive,” Johnson explained. “I feel that when people come to these concerts they are going to walk away feeling more connected to the people around them, they are going to care more about the people around them and that is going to make them care more about themselves and that is probably the most likely way to make real change.”

Playing for Change serves as a reminder to the world that music holds a very special power that transcends race, religion, language, and socio-economic status. It is one of the few things that we have in common on this planet and Mark Johnson’s vision has given us the rare opportunity to look through a window into a world where peace through music is more than a slogan, it is a reality. What is truly amazing is that world is our own and Johnson simply gave us the lens to see it through.

Recommended if you Like:
• Bob Marley and The Wailers
• Fela Kuti
• Paul Simon