Trending Stories from The Marquee
You are at:Home»Album Reviews»John Mayer
By Marquee Magazine on December 1, 2009 Album Reviews, Jonathan Keller 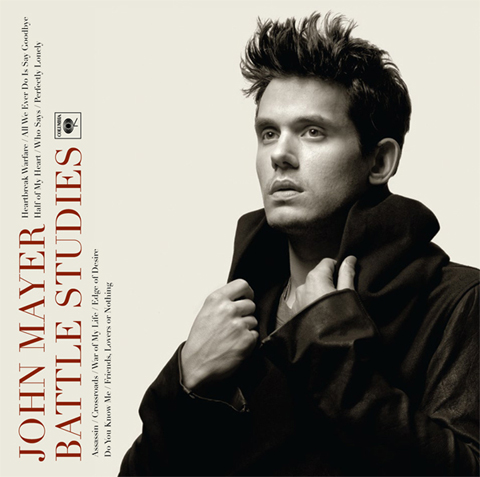 I am not one of those people that like to rip on John Mayer because it seems like the cool thing to do. [Editor’s note: This is most likely a direct dig at the editor of The Marquee, who immediately picked on Keller for even suggesting this review in the first place.]

In the past I have given Mayer favorable coverage when deserving — an example being his 2008 live album Where the Light Is, which I gave 3.5 stars. But, his recent fourth studio effort, Battle Studies, is a major step backward for Mayer as an artist. If a pop star is all Mayer wants to be remembered as, Battle Studies is going to further pigeonhole him into the teen heartthrob image he has seemingly tried to break away from over the past few years.

There is no doubting Mayer’s commercial success. He is easily one of the most successful solo artists of the last decade with four Platinum albums and seven Grammy awards. However, after the huge pop successes of 2002’s “Your Body is a Wonderland” and 2004’s “Daughters,” Mayer quickly shied away from the teen heartthrob image those singles helped create.

In an attempt to return to his blues-rock roots, Mayer formed The John Mayer Trio in 2005 with bassist Pino Palladino (The Who, David Gilmour, Jeff Beck) and drummer/producer Steve Jordan (The Rolling Stones, Eric Clapton). Palladino and Jordan gave Mayer immediate street-cred and the power trio toured, released a critically successful live album and many who weren’t paying attention started realizing that Mayer was actually a very gifted blues guitarist. The trio allowed Mayer to form friendships with B.B. King, Eric Clapton and a slew of the other blues-master elite. Mayer was finally being recognized as a musician and his fan base was spanning generations.

Battle Studies is almost a slap in the face to all those who gave Mayer the benefit of the doubt. It is full of slick, uninspired, horribly written pop songs that go nowhere. I am not blasting this album because it is pop. I am blasting this because Battle Studies is simply the worst album Mayer has made — it doesn’t hold a candle to Heavier Things or Continuum, which I greatly enjoyed.

When listening to Battle Studies it is hard not to picture a desperate guy trying his best to write songs that will get him laid. With song titles like “Heartbreak Warfare,” “Half of My Heart,” and “Friend, Lovers or Nothing,” one can’t help but wonder if Mayer can write anything other than a sappy love song. Lyrically, the album is his shallowest yet. In “All We Ever Do Is Say Goodbye” he sings, “Just when I had you off my head / your voice comes thrashing wildly through my quiet bed,” and in the chorus of “Heartbreak Warfare” Mayer boringly repeats the line, “If you want more love, why don’t you say so?” It is pretty damn mind-numbing.

The only decent songs on the album are the two Mayer didn’t write: Robert Johnson’s “Crossroads,” which is in the style of Cream’s version with an added electronic feel, and Bruce Springsteen’s “I’m On Fire,” which was only available through the iTunes pre-order.

John Mayer is a talented artist; however, he is quickly showing that being a great songwriter is not one of his strengths. That said, I am sure teenage America is going to eat Battle Studies up.

"Daughters" "Your Body Is A Wonderland" Battle Studies John Mayer Steve Jordan Where The Light Is
Cool, Share this article: Twitter Facebook Google+ Pinterest LinkedIn Tumblr Email
Previous ArticleLight: On the South Side
Next Article From the Barstool of the Publisher – December 2009