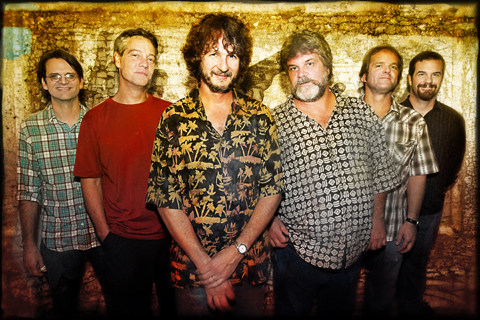 This New Year’s Eve in Colorado, when the hands on the clock hit midnight, there will be more than just the flip of a calendar to 2010. As the chimes on the clock ring in the new year, they will also be signaling the 20th birthday of one of Colorado’s most eclectic, talented and unlikely heroes — Leftover Salmon.

It was in 1989 that Left Hand String Band members Mark Vann and Drew Emmitt merged their musical paths with a western Pennsylvania refugee named Vince Herman of the band The Salmonheads, and Leftover Salmon was born. The group hosted its first gig ever on New Year’s Eve at the Eldo in Crested Butte, Colo., coming up with their name on the drive to the gig from Boulder.

Blending raw talent with an unparalleled stage presence and a no-holds barred approach to any style of music, Leftover Salmon turned bluegrass and the ideas of what roots music was on their heads, and did so with enough infectious energy to win over even the staunchest traditionalists.

Together, the band has shared tremendous successes, fought relentless battles, even lost dear members of the family along the way. They have inspired, entertained, given selflessly, and they have provided the soundtrack to countless Colorado days and nights.

The very first issue of The Marquee featured Leftover Salmon on the cover, and since that issue the band has been featured on more covers of The Marquee than any other act. So, to celebrate their birthday, we wanted to get away from the typical interview and story that we normally do. Instead, to celebrate this monumental event, what we’ve done is asked musicians, industry insiders, friends and family to give us insight into how this group of mullet-loving misfits with hearts as big as their talent has shaped the Colorado music scene over the last two decades.

During their 20 year run, the band’s quirky name has come to mean so much to music fans and industry folks. Our contributors told us the first thing that popped into their minds when they heard the words “Leftover Salmon.”

Mark Bliesener (The Band Guru, co-managed Leftover with Chuck Morris at Morris, Bliesener and Assoc): The originators (along with Hot Rize) of ALL that was to follow.

Bela Fleck (Bela Fleck and the Flecktones): A great party atmosphere, and great energy and enthusiasm.

John Cowan (Newgrass Revival): Drew, Vince, & Mark Vann come to my mind very clearly: the Holy Trinity, as it were.

Billy Nershi (String Cheese Incident): My wild life in Telluride, Colorado. Skiing all day, going straight to the Floradora Saloon, cooking ‘till 10 p.m. and going to the One World Cafe to boogie all night to Leftover Salmon.

Anders Beck (Greensky Bluegrass): One word: FUN! It is humanly impossible to be within earshot of that band and not be having the time of your life. It’s infectious!

Leftover Salmon’s unique blend of bluegrass, rock, country, blues, jazz and Cajun/zydeco music may rub some bluegrass purists the wrong way, but they have bridged a gap between these genres. Though they are probably most closely associated with bluegrass, they have served as ambassadors to music lovers everywhere by welcoming them into the fold without pretense. They opened doors most people didn’t know existed and our contributors were able to put into words what Leftover Salmon has meant to the bluegrass community over the years.

Mark Bliesener: To the zealots — little. To those who truly know — rebirth.

Candace Horgan (The Denver Post): Even if they are only peripherally bluegrass, Leftover Salmon has certainly helped popularize bluegrass in Colorado by introducing the music to people who might not have heard it before. The band also paved the way for acts like String Cheese Incident and Yonder Mountain String Band.

Bela Fleck: They gave the community a different option and brought a new, young audience.

Pete Wernick a.k.a. “Dr. Banjo” (Hot Rize): They are the zany “explorers” out on the edge in rock-land, but still looking back over their shoulder at the bluegrass friendlies, and visiting us sometimes.

John Cowan: I, like Salmon, have lived forever on the periphery of bluegrass. The bluegrass community as a whole usually tries to ignore or pretend these artists don’t exist unless in some way it benefits them (i.e. records, magazine sales, airplay etc.), which is a shame because the reality is that all of these peripheral or New Grass artists bring fans to people like Bill Monroe, Ralph Stanley, and Del McCoury etc.

Billy Nershi: Leftover Salmon showed people how to take bluegrass music add that X factor and get everybody dancing their ass off.

Anders Beck: They were the first ones that I saw who changed the rules. With them, the stuffy confines of traditional bluegrass were tossed out the window — in flames.

Though Salmon has been an integral part of the bluegrass music-loving community over the years, it is important to also realize the impact they have made on the lives of individual people. Without the band there would be no fans, but just as critically, without the fans, there would be no band. It is the magical entanglement of band, fan and music that has kept the whole thing going for 20 years and our contributors shared some of their favorite memories of the band.

Candace Horgan: Salmonfest 2000 at Planet Bluegrass with a variety of acts, from Pete Wernick to The Derek Trucks Band and John Bell of Widespread Panic. Salmon led a wild parade through the grounds after dark, complete with Mardi Gras style costumes, before taking the stage for a three hour set. Guests like Bell sat in during the course of the night.

John Cowan: Most of them involve the band with Mark Vann still alive. Mark was a sweet, smart, introspective guy with his own sense of humor and he was a hell of a banjo player. Drew is one of my best friends, and I’m just flat out crazy about Vince and his P.T. Barnum take on music.

Col. Bruce Hampton: They helped me find the treasures of the Galapagos Islands.

Billy Nershi: I sat in with them one night long before String Cheese. They sang that song “Zombie Jamboree.” Vince sang “back to back, belly to belly. I don’t give a damn, ’cause I’m really Billy Nershi.” He has a way of making everyone feel special.

Bela Fleck: When bassist Tye North had his head shaved on stage.

Anders Beck: Seeing them play the Rico Theatre in 1999. They led the entire crowd out of the venue in a conga-line to continue the party in the streets.

Kirk Peterson: Seeing what looked like Ken Kesey’s deranged farmhands playing Old and In the Way-meets-Metallica for the first time at North Western University’s spring festival on Lake Michigan, circa 1993-94.

Those memories, combined with hundreds and thousands more, went on to influence the lives of everyone who came in contact with their contagious energy over the years. The final question that our contributors responded to was concerning how their lives have been impacted by Vince, Drew, Mark and the other members who have made up Leftover Salmon over the years.

Candace Horgan: Because of Leftover, I discovered things like the Telluride Bluegrass Festival and RockyGrass. I’d also say that because of my experiences at those festivals, I ended up learning to play the fiddle.

Eric Dyce: I am a much mellower dude having known Leftover Salmon.

Pete Wernick: They’ve altered the geography of the progressive end of the bluegrass spectrum, thereby enlarging the big umbrella I’ve been operating under for years. On the negative side, more people are more confused than ever about what the word “bluegrass” means. On the positive, they have spread joy far and wide, and associated it with the kind of music I love.

Col. Bruce Hampton: They inspired me to spell Galapagos correctly.

John Cowan: It has made me a better musician, a better human, and mostly a better entertainer by recognizing through Salmon and their very real example, that the audience isn’t just a part of creation, they are the creation, and the soul reason to do it.

Anders Beck: LoS is a constant reminder of how much fun I should be having as a touring bluegrass musician. WWVinceDo?

Bela Fleck: I appreciate that they were strongly influenced by my generation, so that was a gift to us. Also, Mark’s passing so young. Remember to smell the roses and enjoy the great moments when you are lucky enough to be part of a band of brothers. It doesn’t always last forever.