Trending Stories from The Marquee
You are at:Home»Cover Story»STS9
By Marquee Magazine on December 1, 2009 Cover Story, Features, Interviews 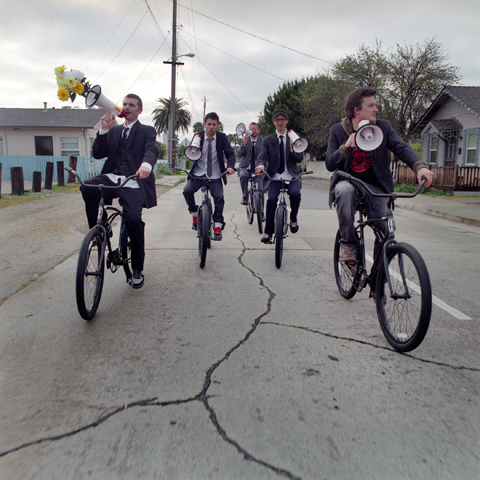 Though originally hailing from Georgia, Sound Tribe Sector 9 (aka STS9) has found a second home, both literally and figuratively, right here in Colorado. The band enjoys one of their strongest fan bases here and bass player David Murphy has relatively recently relocated to the area and now calls it home. “We all lived in out Santa Cruz since 2000 and while everybody else is still out there, I moved out here to be with my girlfriend,” Murphy told The Marquee as he got ready to head to a Nuggets game. “I’ve been out here a little while and I’ve been loving it. It is really nice living in Colorado. I guess we just like picking the nice places to live.”

For the last five years STS9 has celebrated New Year’s Eve in Atlanta, but, like Widespread Panic last year, they have decided to shake things up this year by bringing the party to Denver’s Wells Fargo Theatre. “We really like the Wells Fargo. I went in and toured it back in January and really loved the room,” Murphy said. “We’ve been playing the Tabernacle in Atlanta, and that’s our home, but sizewise, and with some of the difficult logistics they have as far as hanging things and other stuff we can do with our production, we are limited. So we really wanted to get out and take our production to a little bigger scale for the New Year’s shows and Colorado seemed like the perfect place to come do that. We are excited about it.”

While Murphy didn’t drop any secrets about what the band may be planning for the landmark shows, he seemed very excited about being on-stage in Denver when the first decade of the Millennium comes to an end. “The first New Year’s we ever did was at The Fox in 2000 going into 2001, so it’s going to be nice to get back out here,” he said. “Colorado is by far our biggest market in the country. I don’t know if that is because half of Colorado used to live in Georgia or what, but there is a great love of music out here. People really go out and support music and it’s been a real blessing for us in our musical career.”

It’s that fan base that has enabled STS9 to sell nearly 50,000 tickets in Colorado over the past four summers. With three soldout shows at Red Rocks in that time, Murphy and his bandmates were itching to play here at a different time of year.

In addition to the two big shows at the Wells Fargo, the band plans to “axe the cables” and perform a very special acoustic concert for the first time ever on December 29 at the June Swaner Gates Concert Hall on the campus of DU. The band, known for the swirling electronic effects that saturate their progressive “post-rock dance music,” will strip things down and feature several songs that fans have probably never heard before. “We are way more excited about the acoustic than anything else we are doing, just for the challenge of it,” said Murphy. “We grew up sitting around living rooms and playing music together on acoustic guitars and drum kits and stuff so it’s going to be really neat to take our show, and some of our pre-existing songs, and translate them into that format.”

“We’ve also written a bunch of down tempo acoustic, piano, acoustic guitar, fretless bass kind of stuff that we’ve never released and haven’t played for anybody, so we’ll be doing some of that also. We are just really jazzed about the opportunity to do something different than just the full blown rock show with all the spinny, twirly lights and the fog machines and dance music. It’s a side of music that we love and it’s a side that is inherent in a lot of our songwriting even though it is translated live into a more revved rock band show. We are looking forward to the chance to break that down for some of our more hardcore fans who will really enjoy seeing us in that intimate space,” said Murphy.

While the music of STS9 has always been about exploring all reaches of the sonic palette, as their foray into the acoustic proves yet again, the story behind their new record Ad Explorata involved some exploring of a different kind. “Allegedly,” during the recording of the album, the band discovered a shortwave radio channel that was broadcasting a female voice who was reciting numbers on what is known as a “numbers station.” Though it isn’t officially acknowledged by the government, numbers stations are widely thought to be a method of communication between government agents and their operatives in the field. The band was so intrigued with what they had found that they sampled the voice and used it for the beginning of the Ad Explorata track “Central.” They even went so far as to have a cryptographer decode the message that was being broadcast. The numbers turned out to be a set of coordinates that corresponded with an exact location in Big Sur, and several members of the band chose to investigate. It wasn’t long before they were face-to-face with an abandoned military bunker, where they found an embroidered patch that is thought to represent a secret unit that first used satellites to gather signal intelligence from other countries during the Cold War. The story is that this team actually gathered signals from another civilization in our galaxy. Their motto was ‘Ad Explorata, Forward into the Unexplored.’

The band was so affected by the experience that when they returned to the studio they decided that Ad Explorata was the perfect name for the record they were working on because they were exploring uncharted territory and combining elements of their sound in a new way. “We are brining back some elements that we definitely haven’t put into a studio record in a while,” said Murphy. “We’ve always been caught in this weird dichotomy between ‘are we this chill somber Radiohead style band or are we a more Nine Inch Nails dance-floor in your face rock band?’ We always jump around and that’s what we enjoy. After being in a band for 12 years we’ve gotten to the point where we just say, ‘Hey, let’s write music that makes us happy.’”

Fortunately, they have used this philosophy to stay happy as a band and as their legions of fans continue to grow, the band has figured out some very socially responsible ways of harnessing their popularity to give back to the community. As if their non-stop touring schedule and long hours in the studio weren’t enough, the guys in STS9 go out of their way to actively support a number of charity organizations including Boulder’s Conscious Alliance and the New Orleans-based Make It Right Foundation.

“Make It Right are building green, eco-friendly, low income houses back in the Ninth Ward for families who were displaced by Hurricane Katrina,” said Murphy. “After Katrina, we took the first opportunity that we could to go back to New Orleans and play music. We toured the Ninth Ward while there was still complete devastation and, like it would for anybody, that had a lasting impact on us. Those people had everything wiped away in just a few days. In the end, we felt like we needed to do something.”

Consistent with the good message that they spread through their scene and their music, throughout the course of 2009 the band has been donating $1 from every ticket purchased to the foundation. “We decided this year, after going down there and doing some work with a food bank, that we were going to pool all of our resources to try to build a house. Our goal has been to try to raise $150,000 to build one of these houses for a family. We are about halfway there,” Murphy said. “What we tell our fans is that this is their house that they are building for a family, we just happen to be a catalyst for it. We really appreciate the opportunity to do it.”

With yet another fantastic album of otherworldly sounds, a heightened sense of social consciousness and a few tricks up their sleeve for their Denver New Year’s celebration, STS9 promises to continue to break down barriers both musical and otherwise. More than 10 years into a career that shows no signs of slowing, the band continues to prove why they are one of the biggest live draws in Colorado and across the country.