Trending Stories from The Marquee
You are at:Home»Features»Zero 7
By Marquee Magazine on December 1, 2009 Features, Interviews 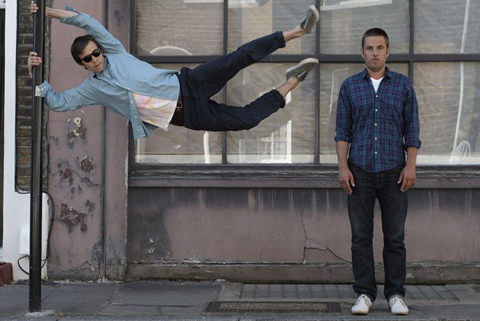 The striking effect that technology has made on music is bravely apparent in the work of electronica experts Zero7.

For ten years, the English duo of Sam Hardaker and Henry Binns has explored the infinite range of sounds made possible when computers are involved in music making. Recognized first for their powerful remixing skills, the two childhood friends soon began making their own music, chilling out the masses with their eternally laid-back sound. Following their Grammy-nominated third album The Garden, Zero7 has had enough of the chill-out corner.

Their fourth album, Yeah Ghost turns up the tempo quite a bit, as the new single “Medicine Man” creates the party, rather than winding it down. Add this new outlook to a collection of new vocal collaborators and you’ll find that in terms of quality, Zero7 hasn’t changed at all. At least, that’s what Binns thinks. “We did rip the lid off everything and ask very big questions about where we were going, but we do have some of this stuff in us — I don’t think it is that much of a departure from our earlier stuff,” he said in a recent interview with The Marquee. “It’s a bit of fun, cheer up everyone!”

With that change in theme, the band has seen some lineup changes in recent years, changes which have bred new life into the band, but have also meant some departures for mainstays.

Losing long time vocal collaborator Sia for this album opened the door for two new vocalists, Eska Mtungwazi and Martha Tilston, each representing a continuing deviation from the downtempo standards of the band.

Nothing in Zero 7’s nature says that the departures are final. In fact, in 2007, even Binns and Hardaker took a break from 7, and created an experimental side project, Ingrid Eto. And, during that “time off” Zero 7 even released an EP under the alias Kling — both projects of which provided work that Binns feels was put to good use on Yeah Ghost.

It was only after the three-year break that Henry and Sam felt the pull of an album — but only in fits in spurts. They had some melodies, but finding a vocalist to help in putting something more concrete together was becoming a real struggle. Such a struggle, in fact, that the recording studio drew out a reprise of one of Binn’s rarest roles within Zero7: singer.

“My vocal on ‘Everything Up (Zizou)’ came at a time of frustration, nothing was shaping up into an album, although it was very empowering that we could make one tune,” Binn said. “We do rely on collaborations, it just depends what comes up. We don’t have grand plans, we just kind of go with what makes you feel good at the time.”

Nothing, he said, was feeling good until Mtungwazi walked into the studio. She wrote lyrics for “Medicine Man” in one day, becoming a crucial player as Zero7 shaped their odds and ends into an album.

“There’s an underlying darkness, but in a good way,” said Binns. “If you are waiting three years, to suddenly hear ‘Medicine Man’ is slightly garish, slightly poppy.”

For their listeners coming to see them perform their old material, Binns promised, they will not disappoint. The combination of new and old make for a great show: “I think it is really sounding quite wonderful. The show should really leave you mildly elated, but for an Englishman to talk himself up is quite dubious,” he said.

Binns did explain that the combination of Tilston’s folk sound and Mtungwazi’s gospel makes their show eclectic in a way it hasn’t been before.

This new life-blood that’s been pumped into the band is also shaping the future of Zero 7, and Binns said that changes in a business realm could be on the horizon as well. “I would like to think that we would have the opportunity to make more records, maybe not on a major label. They only know one way, and it is rather old fashioned,” Binns said.