Trending Stories from The Marquee
You are at:Home»Features»Anvil
By Marquee Magazine on January 1, 2010 Features, Interviews, Joe Kovack

Legendary metal underdogs, Anvil, getting overdue notice thanks to film 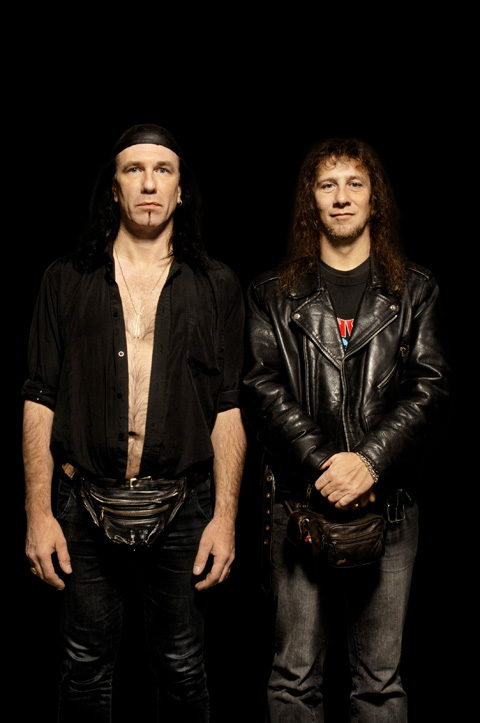 There’s something in saying that you will always pursue your passion regardless of the pratfalls, but there’s something greater in actually following through. Just ask the founders of Anvil.

Anvil just may be the greatest metal band you’ve never heard of. In the late ’70s, Canadian born and bred friends singer/guitarist Steve “Lips” Kudlow and drummer Robb Reiner began their love affair with music and started a musical partnership that hasn’t ceased — even amidst insurmountable hurdles. The guys have been credited with influencing the likes of Metallica, Anthrax and Slayer, yet fame and recognition eluded the band, leaving them behind in an era where early metal prospered.

In fact, it wasn’t until 2008, with the brutally honest, triumphant and sort of humiliating Anvil! The Story of Anvil — a documentary filmed by former roadie and friend Sacha Gervasi — that the band would receive the international recognition that they sought and rightfully deserved.

The Canadian duo have survived 30-plus years of struggling for their art and enough former bandmates to fill a tour van, but that never deterred Kudlow and Reiner from doing whatever it took to make the music work.

Meeting at age 16 when Lips moved to a new area of Toronto, the two forged a bond that would be tested for more than three decades, but to this day remains unbroken. “[Our friendship] was pretty much instantaneous, it hasn’t really changed since the first day and it’s pretty weird, actually, when you stop and think about it — but we never really stopped to think about it,” said “Lips” Kudlow during a recent interview with The Marquee. “That’s the thing. It’s only since the movie and everyone making a fuss that we’ve been ‘friends for 30 years’ and we’re like, ‘What … is that weird?’ and we’re sorta finding out that it is. And it’s a comfort, you know you’re going up against the world with that other person, so it’s never really a feeling of if I’m doing it alone or if I’m all out here by myself. It’s a nice feeling to know that there’s someone out there with you.”

In the beginning, Anvil leapt from the Canadian circuit in the early ’80s to critical acclaim, releasing what is regarded in the metal world as one of the heaviest albums of its time, Metal on Metal, in 1982. Shortly thereafter, the guys played their biggest show with pre-superstars The Scorpions, Whitesnake, and Bon Jovi at the Super Rock Festival in Japan in 1984. But the metal gods had another plan in store for Anvil. For the next 25 years, the band would wander around the Canadian scene, plagued by poor representation or a complete lack of management, and just never really being in the right place at the right time.

“We kept on going and we recorded record after record and did tour after tour. But it’s not like the Home Depot, it’s more like the corner hardware store, and we kept it going, simple as that. It’s an underground metal band, which the majority of the genre is anyway and we continued on in that scheme of things. We had acquired enough of a name that we could keep going, and we did. There’s thousands of fans, not millions, but certainly thousands that have been there for the band all along and purchased the albums as we made them, which in eventuality gets them recorded. It’s not unsuccessful. We wouldn’t say that. It’s been quite successful on that level, but as far as making a huge living on it, no, you can’t and you shouldn’t be depending on those kinds of things. If you’re in it for the right reasons — to make music — that’s what it’s all about,” explained Kudlow.

But it was never for a lack of talent that the guys of Anvil eluded success. Their early albums are reminiscent of heavy metal titan Iron Maiden, with their speed driven riffs and powerfully intricate drumming, a style which they’ve stayed true to all these years. Though they had little money, nary a recording studio or record label in sight, it seemed nothing would inhibit their dream. The band kept recording, releasing 12 albums before their latest, This Is Thirteen, which was self-released on their website in 2007 with the aid of some sympathetic family members.

“We’ve just been taking it as it comes, man, and appreciating every second. It’s never gonna happen again. And it hasn’t been something that I’m using as a vindicator, it’s not about vindication. It’s really just about earning something. We don’t have to justify why something happened, or worry about that. It’s more, ‘We worked our asses off for 32 years and we’re finally getting some steam.’ This is great,” Kudlow said.

Anvil’s journey is one that contains all the necessary components of a true underdog story; a promising beginning filled with raw energy and talent, followed by years of misguided attempts at continuing their lives’ dreams with no real idea if it would ever happen.

Working ordinary jobs in the day and playing small gigs at night, the duo persevered, eventually opening up for their one-time influences AC/DC in 2008 — all because they never gave up on what really mattered most: creating and playing music. As the documentary shows, with enough guts and enough determination, two guys from suburban Toronto with a passion for heavy metal can weather the test of time and fulfill their dreams of their own U.S headlining tour and reaching a new generation of fans. “It’s gonna be much more meaningful [playing in  the U.S.], said Kudlow. People definitely know who we are now. I think it should be one of the most exciting things I’ve done in a long time and people should expect to see a really happy band. And that’s the thing, it’s not a question of success or not, it’s the journey. It’s not the pot of gold at the end of the rainbow, but the rainbow itself. It’s taking that journey and finding purpose and meaning.”