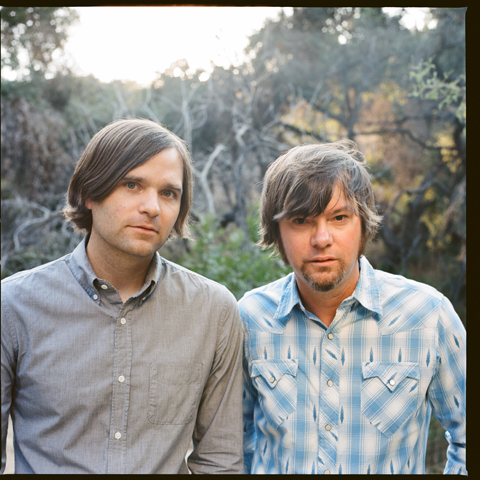 “‘One fast move or I’m gone,’ I realize, gone the way of the last three years of drunken hopelessness,” Jack Kerouac wrote in his 1962 novel Big Sur. “That feeling when you wake up with the delirium tremens with the fear of early death dripping from your ears like those special heavy cobwebs spiders weave in the hot countries, the feeling of being a bentback mudmad monster groaning underground in hot steaming mud pulling a long hot burden nowhere … I’ve got to escape or die…”

That novel, which chronicles Kerouac’s time living in his friend Lawrence Ferlinghetti’s cabin near Big Sur as he reeled from the fame that was thrust upon him by the success of On The Road, tore at the souls of many Americans including a  young Ben Gibbard, who was 19 when he first read the tome. “Big Sur was, next to On The Road, my favorite of all of the Kerouac books and it was that way before this project,” said Gibbard when The Marquee caught up with the Death Cab for Cutie frontman as he was getting ready for the holidays. “It is such a profound and brutally honest piece of work, where he really goes to this place within himself and has to deal with some demons that he has always kind of danced around and never really had to face.”

So, when he was approached, by Kerouac’s nephew Jim Sampas, to contribute some vocals to the soundtrack of a documentary that focused on the time Kerouac spent living in the cabin near Big Sur, Gibbard jumped at the opportunity.  “At the time, there were a lot of other names being thrown around and there was this idea that the album would be this who’s who of alt-rock and roots rock,” remembered Gibbard. “I’ve been a big fan of Kerouac for my whole adolescent and adult life. He’s been a huge influence on me and I probably would have found a way to be a part of this project regardless of being invited or not. If I had heard about it through the grapevine I would have tried to figure out a way to snake my way in.”

Fortunately for him, he was asked, and when he heard that Son Volt leader and co-founder of seminal alt-country band Uncle Tupelo, Jay Farrar was involved, it made the opportunity that much more inviting. “I had never met Jay before this,” Gibbard revealed. “I didn’t meet him until the night before we went into the recording studio. We went out and had a couple of drinks and we kind of speed dated each other. It’s a small enough world that we have enough mutual friends to at least have a place to start. We got to bond on something that was really close to both of our hearts. Kerouac was very influential on both of us.”

Despite the fact that the pair had never met, they were able to harness their shared love for Kerouac’s work to foster some extremely productive studio sessions. “I showed up in San Francisco to spend a couple of days recording with Jay and it turned out that I was the only one who had signed on for the project,” Gibbard said.  “That was a little bit surprising to me, but nonetheless, we did a couple of songs together and it was an enjoyable experience. When we finished those, Jay flew the idea that we could just finish the record together, just the two of us and see what happened. I was into that idea and even contributed a song.” The resulting recordings became the soundtrack and accompanying album for the film One Fast Move Or I’m Gone: Kerouac’s Big Sur, which was released in late October.

While the two did collaborate extensively in the studio to flesh out and complete the compositions, all but one of the songs on the album were crafted by Farrar before the sessions started. “The song ‘One Fast Move or I’m Gone’ is the one that I wrote top to bottom, but we did some punching up and co-writing on a couple of the tunes that Jay had already started. I do have to emphasize that this is very much Jay’s project as far as the writing and the heavy lifting goes. I played a lot on the record and sang and co-produced, but Jay did the lion’s share of the work on the front end of it and that tends to be the hardest part,” Gibbard said.

Rather than attempt to write new lyrics that would do the project justice, Farrar chose to draw exclusively on the pages of Kerouac’s novel for the lyrical content of his songs. It was an ambitious project, but one that made perfect sense for the songwriter to tackle. He has long been influenced by Kerouac’s style and this unique approach allowed for the two artists to collaborate in an unexpected and yet very successful way. In Gibbard’s words, “Jay wrote these songs with Jack, in a manner of speaking.”

For the one track that he contributed to the project, Gibbard didn’t use quite the same approach but was heavily influenced by the novel and the dark, lonesome feeling that lingers on its pages.  “It is a narrative that I wrote around Big Sur, and it’s written from the perspective of Kerouac at the end of the novel. The line ‘one fast move or I’m gone’ is taken from the book and I used that because the producers had said that they wanted a song written around that line, so I took a crack at it.”

“One Fast Move” and the rest of the songs that make up the record convey a hauntingly bittersweet mood that is infectious in its sense of urgency. The vivid imagery of the lyrics blends with stripped down acoustic instrumentation to give the album a feel of Americana that suits it as perfectly for a road trip through the heartland of our country as it does for its intended purpose as the soundtrack for a documentary about Kerouac’s time in Big Sur.

The cinematic journey of the film takes the viewer to the cabin deep in the woods where Kerouac lived as he wrote Big Sur, and puts events in the book into context with scenes of the old Beat haunts in New York and San Francisco.  Throughout the film, contemporaries of Kerouac’s like Lawrence Ferlinghetti, Carolyn Cassady, Joyce Johnson and Michael McClure, and artists like Robert Hunter, Tom Waits and S.E. Hinton add colorful anecdotes and memories about the man who was known as “the vibrant new voice of his generation — the avatar of the Beat movement.”

To promote the release of the film, and their accompanying album, Farrar and Gibbard scheduled half a dozen shows in October, where they teamed with Nick Harmer (Death Cab for Cutie), Mark Spencer (Son Volt) and Jon Wurster (Superchunk, Bob Mould, The Mountain Goats) to form an all-star five piece band. The shows were so well received that the group will hit the road again for another short run this month.

“People shouldn’t come expecting Son Volt, Death Cab or Postal Service songs. I think that if people are expecting that they should probably go and try to get their money back. We are playing the record and some covers that fit the vibe of what we are doing, and a smattering of songs that have popped up in either of our solo releases,” Gibbard said. “We did about six or seven shows in October and it was really fun. I was a little bit worried that people would be expecting something other than what they got, but it seemed like people really enjoyed the show. We both have such a small window of time to go out and play this material that we really just want to get out and celebrate the record and get a chance to hang out some more together,” Gibbard said.