Trending Stories from The Marquee
You are at:Home»Features»Greensky Bluegrass
By Marquee Magazine on January 1, 2010 Features, Interviews 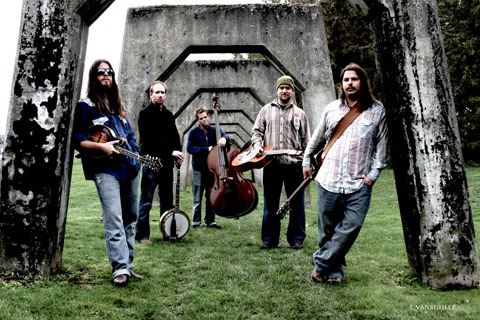 In this month of the new year and a new decade, Colorado will play host to one of the most well-named bluegrass fusion bands of the day: Greensky Bluegrass. Though the band’s stylistic approach is one that seems as if they’re local, the boys actually spend most of their days in Kalamazoo, Michigan.

As Greensky was gearing up for the holidays and a tour which started immediately thereafter, dobro player Anders Beck took time to speak with The Marquee. “This is definitely home base for the band, where we spend our time off. There is not really a lot of time off, though, so we’re not really here all that much.” Beck went on to explain that Greensky is a bunch of road warriors who truly are keeping a hectic schedule. “By the time this year is over we will have played around 165 to 175 shows. We were probably on the road over 200 days this year. What we have to do to spread the word about our band is just play as much as possible because of word of mouth. Going everywhere and rockin’ it is the best way we can figure out to achieve our goal of being able to play music all the time,” Beck said.

The boys’ string of shows in Colorado will mark the physical public release of the band’s latest live album project, All Access. “We’re about to release what is going to be the first volume of All Access. We are releasing full live shows. We got multi-track soundboard recordings of the shows and mixed them down so that they sound really good. You get that live feel, then you get to hear all the jamming and the fun stuff where we get to stretch out. You also end up getting the really good quality. This Colorado tour is going to be the first time we have physical copies of it,” Beck said. “We are planning on recording a lot of these shows in Colorado and maybe making the next volume from one of those shows.”

Colorado has long been a centralized area for this jamgrass/bluegrass fusion genre, and Greensky is fully aware of that as they point their tour van toward the Rockies — knowing that while there will be receptive crowds, there will also be educated fans who have heard, and thus, expect nothing but the best. “We always have really good crowds and really good shows and a lot of it is about the energy transfer between the crowd and the band which always seems to work well in Colorado. It’s a great place to play music because there is a really strong community around the bluegrass music and then also we get lumped into that jamgrass category — I guess rightfully so because we like to get weird and stretch out and we also play bluegrass instruments,” Beck said.

With the slew of bluegrass fusion bands in the scene today it is difficult for many to differentiate between them, but Beck said that Greensky’s approach is a back-to-basics one that centers on the core song itself first, before layers are added. “As far as what makes us unique in and of ourselves, it is our songwriting and that is something that we focus a lot on. The basis for what we do has always been starting with really good songs and then stretching out from there. As we write newer stuff we are actually building what kind of jam or feel will be in that song into the writing process a lot more than was initially the case,” he said. “We also play a lot of rock and roll type covers, from the Talking Heads to Jimi Hendrix or whatever we feel like translating because those are our influences as well as bluegrass. We really try to get back to what makes us sound like we do. We really try to incorporate all of our influences into a sound that is our own and that is how we can come across as sounding really original and like no one else but ourselves.”

As Greensky Bluegrass climbs through the ranks to become the ultimate road warriors, they will always use Colorado as a launching pad. “We are really excited to get back to Colorado. It seems like it has been too long. We love the crowds there and the fact that people really embrace what we are doing. It helps us to play at our best and we’ve always traditionally played some of our best shows in Colorado,” Beck said.