Trending Stories from The Marquee
You are at:Home»Brandon Daviet»Slayer
By Marquee Magazine on January 1, 2010 Brandon Daviet, Features, Interviews

Slayer teams up with Megadeth and Testament for American Carnage Tour 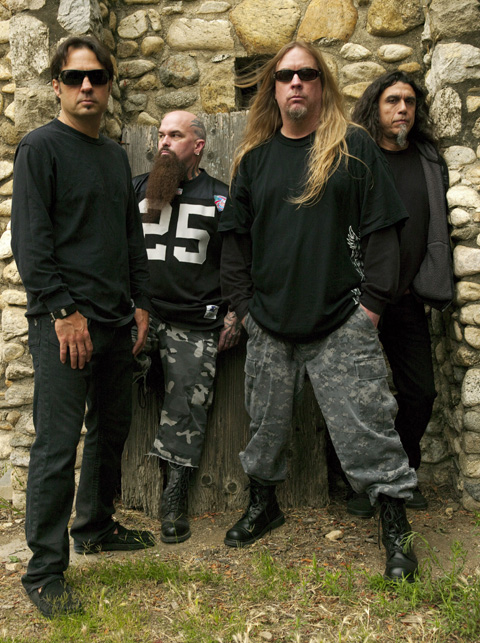 Live Nation just announced that SLAYER and MEGADETH have rescheduled their “American Carnage” Tour date at the Magness Arena for Wednesday, August 25th.

Slayer had previously postponed all of their scheduled tour dates after the band’s bassist/vocalist Tom Araya was forced to seek surgery to treat a back aliment.

Tickets for the original date will be honored at the rescheduled date.

Way back in the year of our Lord 1988, thrash kings Slayer propelled their genre a huge step forward. Up to that point the band had specialized in a fast paced, brain altering breed of music that literally had the ability to turn thrash fans into rabid devotees foaming at the mouth and chanting the band’s name.

The band was riding high on the reception to what basically constituted their third official album, Reign in Blood, a 28-minute opus of evil that is still hailed as one of the most important albums in thrash history. It was doubtful to many critics that Slayer could top that record, but they did with the masterpiece South of Heaven. From the brooding notes of the opening title track to the last feedback of “Spill the Blood,” Slayer had perfected a style of thrash that could be both brutal and melodic at the same time. Sure, Metallica were doing it too with their pretty little acoustic intros as well, but not with anywhere near the same intensity. A Slayer song had the ability to make you want to make love one minute and drink blood the next. With South of Heaven and, in fact, the almost sequel-like follow-up Seasons in the Abyss, Slayer single-handedly reinvented the wheel when it came to thrash music.

Fast forward to today, Slayer’s career has been far from dormant but their last couple of albums, God Hates Us All and Christ Illusion, were almost a bit too much for some fans. That’s mainly because most of those albums were largely written by guitarist Kerry King, whose unique religious view replaced Slayer’s trademark tales of war, serial killers and lakes of fire with point blank assaults on Christianity that flirted with intolerance for any opinion but King’s. His lyrical content has not really changed on the Slayer’s new album World Painted Blood, but what has changed is the band’s songwriting dynamic and because of that, the album is easily the best record to come out of the Slayer camp in years.

Drummer extraordinaire Dave Lombardo took some time to talk with The Marquee before the band started their U.S. tour, along with fellow thrash veterans Megadeth and Testament, to talk about the new album and a few other things.

“We basically wrote half the record, if not more, in the studio,” said Lombardo. “I think, for one, writing the music on the spot helped us pick up the pace. We weren’t so laid back as we would have been if the songs had, say, been written in rehearsal. I think we really kicked ass and like you said, and for me as well, this is one of my favorite records.”

What Mr. Lombardo meant by picking up the pace translated musically into an almost punk rock feel on some of the songs, mixed in with Slayer’s more recent sound. For instance, the almost six- minute, atmospheric title track is followed by a two-minute-and-forty-second song called “Unit 731,” that slices your senses open and is gone before you even know it. The rest of the disc follows the same tack and it is refreshing to hear Slayer’s lyrics take on the government, on the exceptional track “Americon.”

It is also amazing to hear a band age so well. For Lombardo, who basically perfected rapid fire, double-bass drumming, the secret to making World Painted Blood actually lay in minimalism.  “I scaled my drums down a little bit for sure,” said Lombardo. “I think the biggest impact is when you are sitting behind the bass drum and you only have one tom. It affects the way I had to come out of my drum rolls and you have to make different choices without all the other options at my disposal. I don’t know if people can hear the difference on the album, but I can.”

For Slayer, the only proper way to follow up such a triumphant musical return is to gas up the tour buses and then proceed to start mosh pits in every venue they visit. This time around, though, the band will be co-headlining with Megadeth. The lineup represents a wet dream of sorts for thrash fans who have been clamoring for this sort of team-up since the Clash of the Titans Tour back in 1991 that featured Megadeth, Slayer, Anthrax and, if you can believe this, a “Man in the Box” era Alice in Chains, who seriously got pelted with anything that would sail through the air at the time. It’s a bit ironic that Slayer and Megadeth have chosen to share a stage now, as the quick-tempered leader of Megadeth, Dave Mustaine, is a born-again Christian and Slayer’s Kerry King has a blatant disregard for the religion. There have already been several alleged back-and-forth’s in the press, but Lombardo assures fans that any difference in opinion won’t hinder the tour. “You know, there is nothing to work out. Kerry and Dave spoke the other day,” said Lombardo. “Plus, you know, we are all on different schedules, so Dave and his band leave the venue before we are even there. As far as their being a conflict, it just doesn’t exist.”