Trending Stories from The Marquee
You are at:Home»Features»Bela Fleck
By Marquee Magazine on February 1, 2010 Features, Interviews, Ryan Lappi 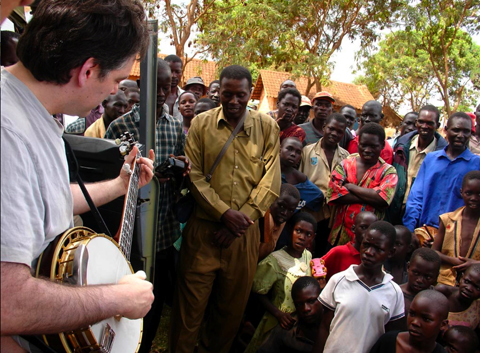 At first glance it may seem odd that a banjo could act as a bridge between cultures. Yet for Bela Fleck, the possibilities are always endless, especially when they are through music.

Fleck has, after all, made a career of carving out a comfortable place for the instrument in such diverse realms as classical music, jazz fusion, bluegrass, and Indian classical. The scope of his musical achievements is truly stunning (he has won 11 Grammys and holds the record for being nominated in more different categories than anyone in history) — proving the banjo remains viable in almost any 21st Century setting. Yet his most ambitious project to date may be found in his search to reconnect the instrument with its African past.

The journey is beautifully captured in the award-winning documentary Throw Down Your Heart and accompanying soundtracks, the second of which, Throw Down Your Heart: The Africa Sessions Part 2, Unreleased Tracks, is being rolled out on February 2. Each chronicles Bela’s two-month exploration of the African continent, from the villages of Uganda, Tanzania and Gambia, to the musical epicenter of Mali, as he sought out the musical and cultural roots of his instrument.

The Marquee recently caught up with Fleck as he was putting the final touches on the album. “The live touring has been such a blast,” Fleck said. “Crowds have come out, and they seem very thankful to get exposed to these fantastic musicians. And the musicians that have come over have been exceptional performers. This current tour is no exception.”

As often is the case with travel, some of the most memorable moments are derived from the people one meets along the way. And it is evident that Fleck was seeking to go beyond his comfort zone. In fact, for much of the movie, he is immersed in the villages, interacting with everyone, from the children to the elders, all of whom seem to share a vital kinship with music.

Similarly, most of the music in the film was recorded in the field, lending a vibrant, spontaneous feeling to the music. “This made things really feel special to me,” Fleck admitted. “It took away the whole ‘clinical’ aspect of being in the studio and striving for perfection. Every sound from around us became part of the music. I loved it. Dave Sinko did an amazing job of recording in the most insane settings.”

On this tour, Fleck will be accompanied by many of the virtuosic — and mostly unknown — musicians featured in the movie, including the blind thumb-piano player Anania Ngoliga from Tanzania, John Kitme (guitar), and Malian n’goni player Bassekou Kouyate.

“Anania and Bassekou are the two musicians I felt most akin to on my trip to Africa,” Fleck said. “They are both incredible and relaxed improvisers. I can’t wait to see what we will come up with together.”

Also featured will be Bassekou’s band, N’goni Ba. “N’goni Ba is a rocking band,” Fleck said. “His group features four n’gonis [a traditional lute], including a bass n’goni. They also have two great percussionists and the beautiful and amazing Amy Sacko on vocals.”

While American audiences probably are not familiar with the n’goni, it plays a central role in Throw Down Your Heart. In fact, the title of the movie reflects the importance of both the n’goni and the akonting — both ancestors of the banjo.

Recorded in Mali with Bassekou, the tune “Throw Down Your Heart” was written by Fleck in Africa after hearing stories about slaves first seeing the sea in Bagamoyo, Tanzania. “We were told that slaves were transported east in much greater numbers than the slaves that went west to the Americas. When they saw the sea, they realized they would never see their homes again, and they ‘threw down their hearts.’”

Yet despite the sadness implicit in the message, Fleck sees the ability of music to transform harsh circumstances into something of an affirmation.

“The akonting could very well be the original banjo,” Fleck contended. “We were told that the musicians were allowed to play these instruments on the slave ships, and that many lives were saved due to it.”

Fleck’s continuing journey seeks to complete that circle, bridging the instruments of the colonial past with their American offshoot, coalescing into a hybrid of the ancient and modern. Indeed, the symbiotic and sustaining relationship between music, traditional instruments, and culture resonates throughout the movie and this subsequent tour.

Every aspect of African life, from everyday chores to rites of passage to death, has a musical counterpart, rendering life and music inseparable. While Fleck has been a lifelong musician and performer, he’s still somewhat envious of the extent to which music permeates their lives. “I love the way their music is such an extension of their culture,” said Fleck. “My music doesn’t fit in the same way, growing up in New York City and playing the banjo.”

• Bela Fleck and the Flecktones