Trending Stories from The Marquee
You are at:Home»Album Reviews»Joe Pug
By Marquee Magazine on February 1, 2010 Album Reviews, Jonathan Keller 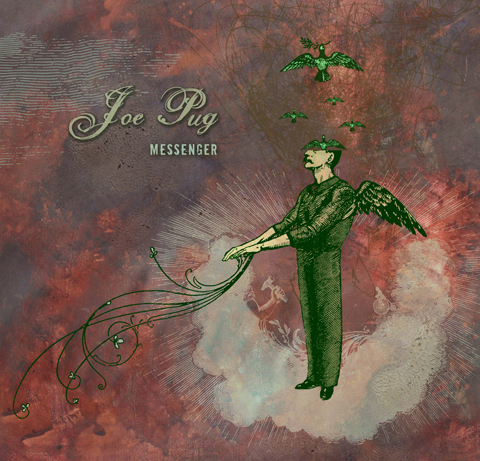 With a million dollar voice and a songwriting pen torn from the fingers of the old-school folk tradition, Joe Pug has created one hell of a debut album. Messenger delivers on all levels and with Pug’s current success sitting on the laurels of two EPs, I can officially say the man’s got the talent to carry one’s interest for a full-length album.

A college dropout, Pug (whose real name is Joe Pugliese) worked as a carpenter by day and spent his nights practicing his musical craft.  Eventually, those nights morphed into recording sessions at a Chicago studio where a friend snuck him into the late night slots after other musicians had cancelled. The outcome, Nation of Heat EP, drew critical praise almost immediately upon its release in 2008. While gigging in Chicago, Pug decided to take a grassroots approach to self-promotion. The plan was simple: At concerts and through his website, Pug offered existing fans unlimited copies of a free two-song sampler CD to pass along to their friends.  To the new fans that contacted him via email, he would also send out CDs at his own expense, even paying the postage.

Inside each package was a personal note thanking the fan for helping to spread the word. The response was overwhelming—to date, Pug has sent out over 15,000 CDs and seen his fan base grow ten-fold. Without the backing of radio, Pug managed to turn his small dedicated fan base into a daisy chain of Pug-promoters that stretched across the country.   Having created a substantial fan base to tour on, Pug played more than 200 shows, recorded another EP, 2009’s In The Meantime, and finally got the backing from Lightning Rod Records to settle down to record his debut album, Messenger.

Messenger is a to-the-point affair featuring 10 songs, clocking in at just under 38 minutes.

There are no extended solos, no songs over five minutes in length and no fluff. It is all about Pug’s songs, voice and acoustic guitar. While most of the songs are delivered in an acoustic fashion similar to both his previous EPs, a few do feature full-band backing, including drums. The album’s title track is an upbeat affair and will most likely be the album’s lead single. While the track sounds like something that could be played on country radio, it still has Pug’s unmistakable lyrical charm and swagger which floats in and out of the musical passages.  “The Door Is Always Open” starts out with Pug’s voice and guitar until a barrelhouse rhythm section propels the song into its chorus. In all, the accompaniment works just fine and shouldn’t irk Pug fans too much. If anything, it makes his music even more accessible, which I believe was the goal for this release. The accompanying musicians don’t distract from Pug’s acoustic charm — the ethereal pedal steel guitar that creeps into “The Sharpest Crown” being a perfect example.

The most striking thing about Pug has to be his age and the maturity he shows beyond it. While he is only a tender 25 years old, his vocal delivery and songwriting gives the illusion you are listening to someone much wiser than you will ever be.

Hard to believe this is only his first full-length album.