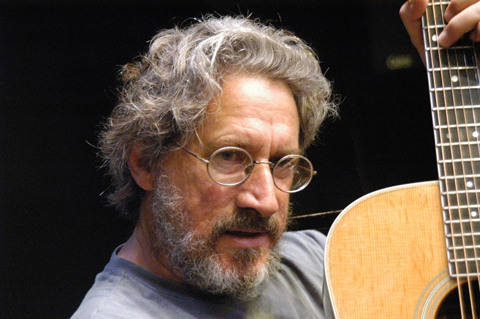 To say that the people of the Pine Ridge Indian Reservation in South Dakota have it rough is an understatement beyond comprehension.

Their ancestors were part of the horrific Wounded Knee Massacre in 1890 — the last armed conflict between the Great Sioux Nation and the United States of America — which left  146 men, women and children dead.

More recently, the Pine Ridge Reservation was entrenched in the battle of American activist Leonard Peltier, who was convicted and sentenced in 1977 to two consecutive terms of life imprisonment for the murder of two FBI agents in 1975. Many believe that Peltier is a political prisoner, wrongfully incarcerated, although his conviction has survived every appeal in the court process.

In addition to those very political pieces of history, the Lakota people suffer with staggering rates of poverty, insurmountable levels of alcoholism and a self-worth that is as dismal as their brutal winter weather.

So, when singer/songwriter Jim Page was asked to be part of the Buffalo Heart Benefit for the Pine Ridge Reservation, it was no wonder that the artist, who has written songs about Wounded Knee and Peltier, jumped at the chance to be involved.

“As a person of the ‘dominant culture’ and all the privileges that go along with that, I thought it was really my obligation to support these people,” Page said, in a recent phone call to The Marquee from his home in the Pacific Northwest.

Page said that supporting Buffalo Heart is not an idealogical project, but one of simple survival. “You know that old adage of, ‘Give a man a fish and he’ll eat for a day, teach him to fish and he’ll eat for a lifetime?’ Well, I believe that sometimes you have to feed the person first so that their stomach is not growling and so they can focus on the lesson,” Page said. “That’s what this is about to me.”

The California born and raised songwriter has been compared to Woody Guthrie and Bob Dylan, for his biting political themes. For decades, Page has played the folk singer festival scene and shared stages with everyone from Bonnie Raitt and J.J. Cale to Robert Hunter and ‘locals’ Leftover Salmon. (Interesting side note: Page and Leftover’s Vince Herman once traveled through the Dakotas together. On that trip, Herman’s son Silas found a puppy that he convinced his parents to let him keep, and that dog bears the name Jim Page.)

Page, who has released a slew of albums over the years, said that in April he will return to Jack Straw Studios in Seattle to record a new album with Michael Gray on fiddle and Grant Dermody on harp.

The Buffalo Heart Benefit, which has just joined forces with Conscious Alliance for this project, will also feature Nederland’s Elephant Revival.

Elephant’s bassist, Dan Rose, told The Marquee in a recent interview that his band has roots in the Cherokee Nation and that, in addition, just being human made them want to be involved. “It’s just a heart felt kind of thing, knowing very well that the American Indians understood the earth on a very pure and connected level. Here we are in Boulder and just a few hours away there’s this third world country, in our country, and it happens to be the poorest county in the country,” Rose said.

As Page sees it, this benefit may not fix all the problems, but it’s at least a step in that direction for a people who have been unfairly treated throughout American history. “There shouldn’t be any special people in the world and I’d really like to just be another person with loves and fears and everything else. But there are some debts that need to be paid and before my country can ever stand up as a healthy nation it has to stand up and address some things,” he said.