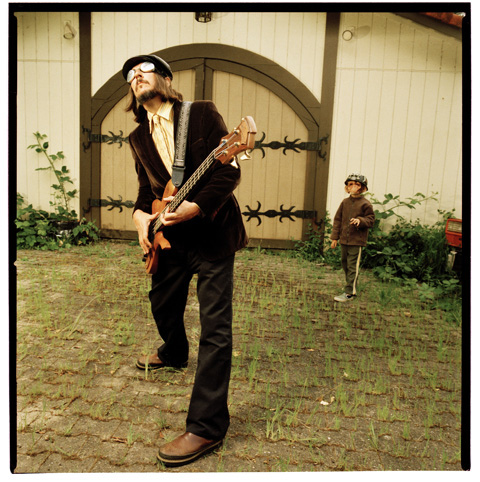 For the past 20 years, Les Claypool has given America some of its most eclectic and ethereal music it could ever imagine.

Since the early days of Primus, Claypool has been warping the minds of music lovers with his infinitely intricate bass styling and strange but good natured sense of humor. Permeating the counterculture scene, Claypool has become an iconic member of music’s elite, creatively evolving every step of the way and forging a career that would rival that of imaginative wizards Tom Waits or Frank Zappa.

Even with the success of his band Primus, the true scope of Claypool’s imaginative spirit wouldn’t be fully realized until the band parted ways in the beginning of this new millennium. “I mean, obviously Primus put me in a position of not being pigeon-holed into one thing or another, so I was able to go do eclectic things and have people not go, ‘Whoa, there’s the guy from Journey playing with Bernie Worrell’ and not thinking it’s strange.  I mean, maybe that’s a terrible analogy (laughs). But in Primus, I was embraced by the jam band scene and some of that was because of the technical theatrics that Primus was somewhat known for, and ’cause those jam folks they do like to see you wiggle your fingers a lot,” Claypool mused in a recent interview with The Marquee.

Claypool’s bottom line is that change is good and he’s made nothing else more clear than the fact that he won’t do any one thing for too long. While orchestrating such acts as Colonel Claypool’s Bucket of Bernie Brains, Les Claypool’s Frog Brigade, and the Holy Mackerel, Claypool stepped up his forward march into the unearthly realm of creative genius. With less of the Primus-fueled psychedelic rock and more of an intricate bass laden and jam-oriented sound, it was no wonder the jam scene embraced his music with such unadulterated compassion.

It was a new territory to explore and one that would rival his love of playing in smaller venues. “You know, I always say my favorite venues to play are old theatres just ’cause of the vibe. They’re designed for performance, designed to project sound, and sometimes they smell kinda funky. But it’s pretty cool to walk the same boards that W.C Fields, the Marx Brothers and a lot of these old Vaudeville performers did. But there are definitely certain elements of the big festivals that are really cool and conducive to a good show. It’s a different kind of show, and there are elements of the smaller show. Each one is sort of a compromise unto itself. But the people are paying these gobs of money to go to these festivals and get to watch all the different artists, some collaborating with each other within the festival. They schlep through the mud, camp out and all these things. It’s like a big barbecue, you’re just hanging out and playing music, and that’s a pretty cool thing, as long as it doesn’t start raining on ya,” Claypool said.

As if his own creativity and musical intellect wasn’t enough, Claypool has surrounded himself with an abundance of like-minded, musically talented individuals to inspire and learn from in his ever-evolving career. “I think that just like in life, birds of a feather flock together. And I attract and am attracted to eccentric elements of society. And it’s the same in the music community. We all kind of have a similar sensibility and are drawn towards each other. It’s like having a conversation. If you’re accustomed to having conversations with many different types of individuals from different walks of life, you’re going to be much more able to have interesting conversations. And it’s the same with playing music. You play with as many people as you possibly can. Whether you think they’re technically proficient or not, you learn something from everybody you play with. And it makes you a better player, a better listener and responder,” said Claypool.

Taking a new avenue with his last two efforts, Of Whales and Woe and Of Fungi and Foe, Claypool shed the traditional elements of guitar and drums and supplemented a new sound that could only arise from the subconscious of a man who sees no limits in the creative world. Employing xylophones and a saxophone as lead on Of Whales and a cellist on Of Fungi, Claypool doesn’t shy from reinventing himself and his sound. “I’m always looking for new directions; I tend to not like to go over the same bridge twice. I like to keep plowing through new territory,” Claypool said.

Last year, playing with his mutated mini-festival The Oddity Faire, Claypool brought strange and lovely visual elements to coexist with his music. While the sword swallowers and fire dancers add their mystique to the show, this year’s tour will feature just the band, playing the latest soundtrack of his ethereal mind.

Being from the Bay Area of California and an aficionado of the counterculture, Claypool, never short of an opinion, said that the booming medical marijuana industry that has sustained in California and just begun here in Colorado may be a good thing for both states. “I spent many years being a stoned fellow, but I stopped about a handful of years ago and now only smoke every great once in a while. But I think on many levels it’s a positive thing, here in California. It could help our floundering economy quite a bit just in the taxation of the distribution of this stuff. There are many valid elements to medical marijuana, but like anything else it can be abused. I think if handled properly it could be an extraordinarily positive thing for society.”