Trending Stories from The Marquee
You are at:Home»Features»Stockholm Syndrome
By Marquee Magazine on February 1, 2010 Features, Interviews 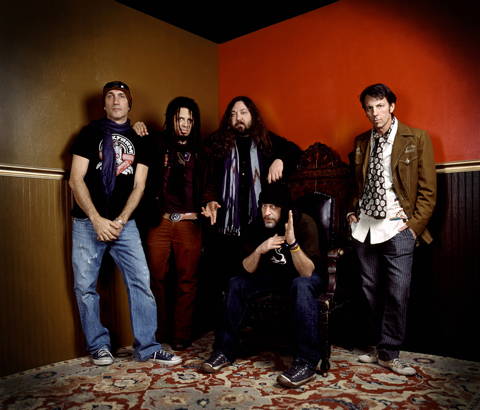 When Widespread Panic’s bass player, Dave Schools, and acclaimed singer/songwriter Jerry Joseph, of Jerry Joseph and the Jackmormons, first decided to collaborate back in 2003, each initially thought that their new musical side project would be a fun temporary change of pace. Now, with one studio album behind them, a new studio album and a live album both set for release this year, plus a new tour on the horizon, Stockholm Syndrome has transcended being just a side project. Stockholm Syndrome is a band.

The Marquee’s recent interview with Joseph got off to a late start. The relatively-newly clean and sober vocalist was getting a tattoo that morning, and the session ran longer than expected. When Joseph’s voice finally crackled through the line, slightly muffled from the sounds of the streets of Harlem, New York, where he resides during the brief respites between touring with his two primary bands, he was in pain.

“They’re only supposed to let you go for two hours and I must have been there for five,” he said with a touch of pride.  “My arm hurts like hell right now.”

That Joseph is tougher than the average musician will come as no surprise to anyone who has ever listened to his music, whether it be a Jackmormons tune, a cover of one of his songs by legendary Southern rockers Widespread Panic, or a track from the first, and to date only, Stockholm Syndrome album, 2004’s Holy Happy Hour, released on Terminus Records.

The unusual choice for a name, Stockholm Syndrome, refers to the psychological phenomenon in which a hostage bonds with his or her kidnappers. It seems an apt moniker for Schools’ and Joseph’s somewhat convoluted relationship. Schools has produced Jackmormons records; Joseph has written songs that Widespread Panic has made so popular that some people are not even aware that the songs are actually covers. All the pair needed now was a band.

They tapped an all-star cast of musicians: Eric McFadden, a San Francisco-based guitarist who has worked with Keb Mo’, Les Claypool and George Clinton’s P-Funk All Stars; Danny Louis, an upstate New York-based keyboard virtuoso widely known for his role in Gov’t Mule; and, Wally Ingram, a Los Angeles-based drummer who has worked with Jackson Browne, Sheryl Crow, Tracy Chapman and David Lindley, among others. Louis is a replacement for original member Danny Dziuk, a Berlin-based keyboard player who appeared on the debut album, but was forced to leave the group when the logistics of recording and touring with an international band became too complicated.

The new studio album that the band has in the works, tentatively titled Apollo, after one of the tracks (and the Apollo Theater, which is near Joseph’s home in Harlem), has been finished for almost a year, according to Joseph. The album was recorded in the U.S. and mixed and mastered in the Bahamas at the legendary Compass Point Studios (founded in 1977 by Chris Blackwell, founder of Island Records). Joseph says the process was similar to the recording of Holy Happy Hour, which was both recorded and mixed in the Bahamas.  “Dave and I write the songs,” he said. “Then we take them to the other guys and they fill in their own parts.”

Joseph’s career-long predilection for writing what he wryly describes as “religious-sex-junkie-heartbreak songs” contrasts nicely with Schools’ more upbeat attitude and booming bass lines. The eclectic abilities of the other members, including McFadden’s tendency to trade his guitar for an electric mandolin and Ingram’s penchant for draping his drum kit with found objects that rattle as he plays, make this a band that truly defies definition.

The band is currently considering its next move in regards to the album, which leaves them with the question of shopping the album to labels or releasing it independently. The choices confronting such a savvy band seem endless. In the meantime, a live album, recorded at an in-store appearance last year at Streetlight Records in Santa Cruz, Calif., is slated for more immediate release. The band is also hoping to tide over fans hungry for new material with the upcoming tour. “We chose about half the songs from the [unreleased studio]album that we’re going to play live on this tour,” said Joseph. “The rest we’ll save for after the album comes out.”

No, these days the sober Joseph looks to pain, like his new tattoo, for an outlet. “It’s just a big bunch of colorful flowers, a sleeve of them, on my arm. I had some tattoos that I didn’t like from when I was younger that I wanted to cover up. Not my Al Qaeda tattoos, though. Those are on my back,” he joked. “I just got those.”