Trending Stories from The Marquee
You are at:Home»Features»Tauntaun
By Marquee Magazine on February 1, 2010 Features, Interviews, Joe Kovack 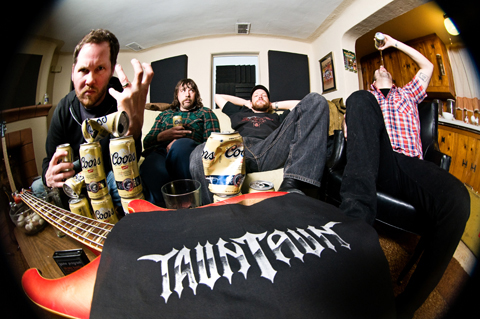 With a prominent jam-folk scene and with hip-hop infused electronica growing steadily, one wouldn’t think that there’s much room left for metal in Denver. But it’s here and it’s strong.

Beginning in 2006, the guys of Tauntaun wanted a release that only playing metal could satisfy. Each of the Denver natives had their respective bands before becoming friends and spontaneously deciding that it was time to rock.

The Marquee caught up with guitarist Ian O’Dougherty and talked about the little known but prominent metal scene in Denver and how they weren’t influenced by any metal after 1988. “Tauntaun is a good release from the other music that we play. Nice, cathartic and loud,” O’Dougherty told The Marquee. “When we started, we were a metal band specifically because we thought that there was an empty niche in Denver and space for a band like us. But after we started playing we realized there were all these really great bands that we just didn’t know about before. We realized that there’s a much more vibrant metal scene here than we had originally thought and we’re just thankful we can be a part of it, ’cause we’re not technically metal guys. We all came from punk rock bands, so we were a little nervous in the beginning wondering if we would be accepted or not, and it seems like we have been,” O’Dougherty said.

Recording their first self-titled album in 2009, the guys set off to only make a record for vinyl, not even thinking about touring or releasing their music digitally. It began only as a way to create a sound that they grew up listening to in the late ’70s and early ’80s, but ended up leading to more than 20 live shows in 2009. “We all grew up listening to metal and we learned to play our respective instruments to metal songs. And then all of us agreed that metal just wasn’t really as good after ’87, ’88. Part of the whole idea was making a heavy metal record just to make a record, and to never do a CD or release digitally, just specifically to make vinyl. So it was a pretty specific decision to be pre-digital sounding. We had never planned on playing live at all. And when we were rehearsing to record we realized it was really fun to play. So after the album came out in March 2009 we ended up playing 25 shows around Colorado Springs and Denver, and now we’re working on the second record,” O’Dougherty said.

Tauntaun brings a raw energy to their music that bleeds intensity without ever trying to be more than they are. With heavy straight-forward, power driven riffs and drumming befitting of any metal troupe, the band that wasn’t even supposed to be is garnering acclaim among the metal community and beyond. The guys don’t plan on giving up their other musical efforts but are realizing that being part of the underground metal scene in Denver is an honor and a pleasure, even if it isn’t at the forefront of the music community.

“Cephalic Carnage is a huge metal band and they are from Denver. They’ve played festivals in Europe and they’re really well known outside of Denver, but inside of Denver they’re just kind of a small metal band,” O’Dougherty said. “It’s weird but Denver’s metal scene is still kind of underground. It is kind of a relaxed culture here but every scene has its underground niches and the metal scene in Denver is just currently still kind of underground. But it’s not a small scene, or bad scene by any means. It just isn’t mainstream. But the music scenes here in Denver just keep getting better and better and I’m just glad we can be a part of it.”