Trending Stories from The Marquee
You are at:Home»Features»The Entrance Band
By Marquee Magazine on February 1, 2010 Features, Interviews, Timothy Dwenger 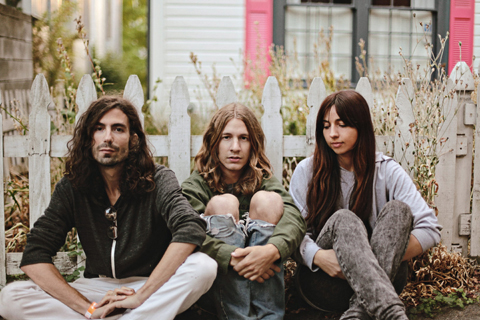 Forty-two years ago, at the age of 39, civil rights leader Dr. Martin Luther King Jr. was assassinated in Memphis, Tennessee. Dr. King’s work and strong beliefs paved the way for many of the sweeping civil rights advances that have been made in this country since his death.

Today, our country honors his legacy with a national holiday on the third Monday of January each year, and many individuals and groups around the world pay tribute to him each day in their own way.

One such tribute comes in the form of a soaring, blues-drenched rock and roll song written by Guy Blakeslee and performed by The Entrance Band on their latest self-titled release. “I said it’s not enough to repeat what he said when they’re still trying to defeat what he said / Not enough to praise what he did / We have to do what he did” sings Blakeslee on the album’s second track, simply titled “M.L.K.”

Though he was born in Baltimore, Maryland, 13 years after Dr. King was laid to rest, Blakeslee holds the message that he preached and worked for very close to his heart. In a strange coincidence, The Marquee caught up with Blakeslee from his L.A. home as the country celebrated Dr. King’s 81st birthday. “It was one of the rare times in my life where instead of allowing something to come to me, I actually set out to write something lyrically because I felt like someone needed to remind the world of this great figure,” Blakeslee said. “As much as he can be heralded on his national holiday and he can be taught about in schools, I think the true spirit of what he was about is a fire that needs to be stoked or no one is going to see his light anymore. While I can’t do that single handedly, I wanted to make my contribution.”

It seems that his contribution has been noticed.  While praise for the album has come from major press outlets around the country, it was clear that as music fans in-the-know turned their thoughts to Dr. King, Blakeslee’s “M.L.K.” was the song that got their attention. In mid January the song turned up on Vanity Fair’s website, accompanied by a lengthy interview with Blakeslee, and it was also featured in the “Today’s Top Tune” section of the legendary L.A. radio station KCRW, among other places.

Blakeslee has been making music for more than 10 years but it wasn’t until last year that the buzz surrounding his current project really began to heat up. “At first it was just me and Paz working together on a lot of songs and kind of knowing that we wanted Derek to be in the band. But, he was going to school at the time in Chicago and still had a place there, so we would go to Chicago and play with him and then he would come to L.A. and play with us. I guess we formed the band long distance style and then after one of our first tours he decided to leave Chicago and come live here.  Since then it’s been a full-on lifetime commitment for all of us,” Blakeslee said.

While Guy, and drummer Derek James, are both accomplished musicians in their own right, bass player Paz Lenchantin brings with her the experience of playing in bands weighed down with huge expectations. Among countless other projects, early in her career she was a member of A Perfect Circle with Maynard James Keenan of Tool, and Zwan with Billy Corgan of The Smashing Pumpkins. Though Lenchantin has always been a respected player, her role as one half of The Entrance Band’s rhythm section has cemented her reputation as one of the best female bassists in the business.

Though other two members had contributed to Blakeslee’s previous album, Prayer of Death, their recent record was a departure from how they had worked in the past. “We performed this record in the studio, pretty much live,” he explained.  “The guitar, bass and drums were recorded together. There are little overdubs, here and there. but it attempts to capture what it sounds like when we are playing together and playing off each other.”

Despite the strength and sound of their recent record, this is a band that, by all accounts, shines in the live setting. There is a certain energy that simply can’t be reproduced on a recording and that is what sets The Entrance Band apart. They more than live up to their arena-ready songs full of thunderous riffs, scorching solos, and wailing vocals. As Blakeslee’s hair swirls around his head, James’ blurred sticks pummel his kit, and Lenchantin’s rock star poses help work her way into countless teenage boys’ dreams, it becomes clear that this band has what it takes.