Trending Stories from The Marquee
You are at:Home»Features»Ultraviolet Hippopotamus
By Marquee Magazine on February 1, 2010 Features, Interviews, Jeffrey V. Smith

Ultraviolet Hippopotamus brightens the future of the jam scene 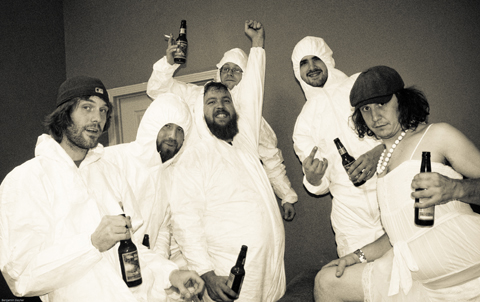 Michigan has unleashed a beast, and it’s headed straight to Colorado.  There’s no need for alarm, however, as this Great Lakes monster only has an appetite for funky jams that mix jazz, electronica, reggae, bluegrass and rock.

While it may sound like something you’ve experienced before, Ultraviolet Hippopotamus, as the name implies, is unquestionably an animal of a different color.

The six-piece band out of Grand Rapids, Mich. has become one of the Midwest’s hottest improvisational-based dance bands. Increased attention from local media and six years of steady regional touring has caused the band’s local popularity to explode.

Anyone remotely familiar with the ‘jam band sound’ will immediately recognize the act’s influences and genre-mixing musical objectives, but Ultraviolet Hippopotamus adds a level of talent, intricacy and polish that truly sets it apart. Tight, energetic jams and outstanding vocals — a true rarity among the band’s peers — coupled with the act’s spontaneity and strong songwriting add to its appeal.

Like most groups that mix myriad influences and styles, generalized descriptions of UV Hippo are tricky. Sometimes it’s easier to make something up. In a recent interview, founding member and guitarist Brian Samuels told The Marquee that the band was once called, “super shreddy space robots from the future.” “We thought that was a pretty decent description of what we’re going for,” Samuels said. So, if that makes sense, then this definitely is the band for you.

Labels and descriptions aside, Ultraviolet Hippopotamus ultimately “likes to keep [the]energy cranked pretty high” and simply wants to do whatever it takes to “make the audience dance,” Samuels said. Not a bad agenda for an emerging act.

When experiencing UV Hippo live, jam band fans are quickly reminded why they fell in love with the genre’s sound in the first place, no matter when, where, and how they got on the bus. Rhythmic grooves and chord patterns, long sets of copious musical styles, big jams, sweet melodies and a powerful band dynamic are all well represented — as is the typically crowded dance floor.

All told, UV Hippo provides hope for the future of jam bands and the jam scene, which has become somewhat conventional and musty in recent years.

The band got its unassuming start in the small town of Big Rapids, Mich. “[It was] just friends that formed a band,” Samuels said. The name came, he explained, from a Robert Anton Wilson book in the Illuminatus! trilogy. “We picked out the longest, funniest sounding name we could find,” he said. “It’s actually worked out pretty well for us.”

Over the initial six years, “members have come and gone,” but since relocating to larger Grand Rapids two years ago, the lineup has been stable, and the UV Hippo jams have been progressively growing.

Like most bands that personify the jam band esthetic, Ultraviolet Hippopotamus credits its audience for influencing its energy and musical directions. “The fans are everything,” Samuels said. “We feed off of their energy and we play better when we’ve got people dancing and enjoying the music.” The guitarist also said that without the support of the band’s highly motivated fan base, UV Hippo “would never have made it out of Michigan.”

“Those guys have helped spread the word for years, and continue to drive hours to see bands they love play. It’s pretty humbling to see so many kids working to help support the music we write,” Samuels said. “We’ve definitely had some moments on stage where it’s building and building, and we look at each other and look at the audience and everyone is just raging it,” Samuels said. “It’s awesome. It’s a huge rush. Those are the moments that we’re working for.”