Trending Stories from The Marquee
You are at:Home»Features»Rob Drabkin
By Marquee Magazine on March 1, 2010 Features, Interviews, Joe Kovack 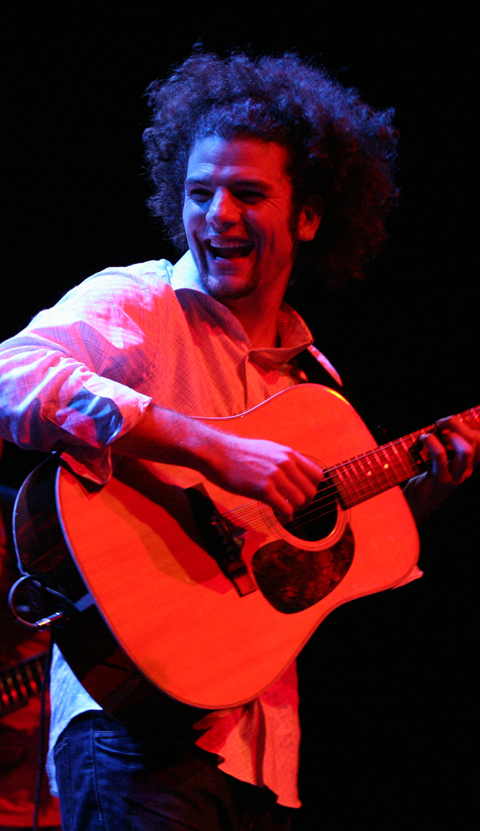 When folks talk about an artist growing, rarely are they talking about a physical change. But for Rob Drabkin, it seems that the more his career grows, the more his full-throttled afro reaches to the ceiling, as if the stage lights he plays under were actually grow lights, forcing his locks to stretch with each passing performance.

Growing up in Denver, Drabkin was like any other 11-year-old-boy just finding the awesomeness that is music. His poison was Metallica, Guns ’N Roses, Nirvana and the other rock essentials of that era that pump a kid up before a baseball game or make them want to learn to play that epic instrument that makes it all possible: the guitar.

Drabkin’s case was the latter and it only intensified when his older sister received an acoustic guitar one year for Christmas. But to his surprise and pleasure, he received an electric guitar, which in his mind was far superior in comparison. From then on he would meticulously practice, learning his favorite songs, mastering the chords and dissecting the solos of the aforementioned musical greats.

The relationship between boy and guitar blossomed this way until a new realm of music and instrumentation was revealed to him in the beginning of high school. “I had gone for a more harder edge kind of thing and in my school you had to take an art class, so I took band. And all of a sudden my power chords weren’t applying to everything that we were doing, and it was a challenge. But the big thing was, that the solos started to come my way and I was just learning about improvisation and melodies, just finding a huge love for jazz and improvisation, and that kind of sparked it a lot,” Drabkin said in a recent interview with The Marquee.

During the years in his school’s jazz band, Drabkin was taught the fundamentals by guitar virtuoso Ted Reece, who recognized Drabkin’s musical promise and wanted to give him the necessary components to further develop his talents.

Immersed in the jazz and classical essentials of guitar, these years expanded Drabkin’s outlook on the scope of music, showing him the art of improvisation that would influence his creative style in the years to come.

Although at Trinity University in Texas, Drabkin would set aside his six-string for the books and earn a degree in biochemistry/molecular biology and Spanish, the music would never be that far from his mind. Keeping his playing as only a hobby, Drabkin eventually realized that while science had a hold of his mind, music had a grip on his soul. And so he began his metamorphosis into creating music.

It was at the age of 22, with school completed, that the need to evolve his craft was first realized. Adding singing to his repertoire was the next step and Drabkin spent countless hours honing his skills so that he could fully articulate the music that was inside. “I never sang before I was 22, and that was a hard thing to overcome, to practice and try to learn how to do it, you know. I kind of wanted to start getting my head into a more lead front instrument, and then when I really decided I wanted to start music, the kind of things I was creating on guitar and the type of music that I really resonated with the most needed me to sing. So I just had to suck it up and that was really the only way that I could grow as a musician,” Drabkin said.

But the hard work paid off as Drabkin cultivated a singing voice that he can call his own: a soulful yet penetrating style and tone that compliments his intricate guitar picking almost flawlessly and earned him the award for best singer/songwriter in Westword in 2009. In addition to getting that nod, Drabkin has also progressed by playing opening slots for acts such as Tim Reynolds and Davey Knowles and Back Door Slam.

And as his reputation has grown, so too has his set and sound. While writing music for his first full length album On These Heavy Feet, released in 2008, Drabkin added a full band to flush out his sound. While it’s possible to catch him with his full band, most times it is just Drabkin and his guitar, playing his songs, while giving it the good flare of improvisation that he learned from jazz to keep it fresh and new for the audience every time. “It’s a very improvisational-based show, it’s different every time,” he said. “It’s a fun show.”