Trending Stories from The Marquee
You are at:Home»Jordan Bleckner»Concert choices abound leading up to and including the 42O Holiday
By Marquee Magazine on April 1, 2010 Jordan Bleckner 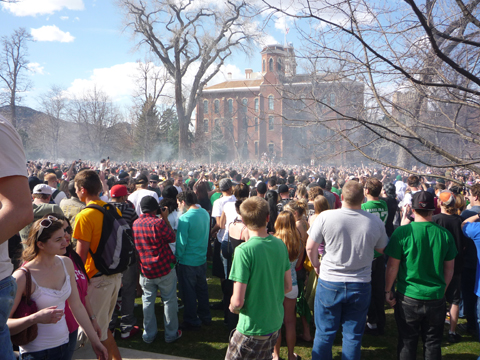 Concert choices abound leading up to and including the 42O Holiday

Colorado has been a legal medical marijuana state since 2000, but over the past year the movement has exploded with dispensaries popping up everywhere, and Coloradans running in numbers never expected to get their medical cards.

The underground holiday of 4/20 has long been a big deal in Colorado, but with the aforementioned explosion, April 20, 2010 is poised to be Colorado’s biggest coming out party. Accordingly, concert promoters have put their best foot forward, and the result parrallels other great music holidays like New Year’s Eve and Halloween.

(For a complete listing of all 4/20 shows, please refer to our calendar section)

The Avett Brothers are riding high on a wave of newfound widespread popularity as their Rick Rubin-helmed, critically lauded album I and Love and You is a hit amongst love struck young hipsters and those who enjoy the tuneful jangling of The Beatles. The band clearly hasn’t forgotten its roots, as they return to Boulder for a two-night run that is already sold out.

Yes, I am aware that the name is convenient for the day. It certainly works very well here, but it may also fool you. High on Fire is a heavy metal trio from California, which is probably why they play the self-described genre, ‘stoner metal’ — very low tune with heavy bass to create that crawling, sludgy sound. Fans of Opeth, Mastadon, and Moby Dick will get a large buzz from this group.

As part of their one-year anniversary celebration, Incredibowl Industries is hosting its own Extravaganja with performances by LuckIAm from California’s Living Legends, Menny More of Easy Star All Stars, Hi-Coup and The Prime.

In the midst of a blossoming Denver/Boulder music scene that has showcased talent of the electronic, alternative, and indie persuasions, as well as a smattering of other potential success stories, Ego vs. Id, still a relatively undiscovered jewel, stand ready to make their mark. Ego vs. Id play the kind of rock and roll that recalls Jet or early White Stripes on some tracks, while channeling Dr. Dog on others, though still managing to hold up to a distinct sound that is all their own. With a new album set to be released any day now, the Boulder rockers will use this 4/20 event (actually happening on April 17) as a CD release party of sorts.

The dynamic, scene-setting musicians of Pnuma Trio — who were recently accepted to STS9’s label 1320 Records — have been known for their forward-thinking compositions and moving, powerful improvisations since their explosion onto the scene in 2004. Their debut studio album Character was self-produced by the band and sports a special bonus track that features Crown City Rockers’ MC Rashaan Ahmad.

Birmingham, England-born Patrick Murray has both first and last nicknames. Pato, for “wise owl,” and Banton, meaning “heavyweight,” gives the reggae singer the title of a wise heavyweight. In 2008, he released Destination Paradise, influenced by the spiritual Urantia Book. The now California-based singer started a new band in 2009, the Now Generation, and has been touring steadily with them since the formation.

The Parisian powerhouse returns to Colorado with a sense of newfound confidence. In case you’ve been living under a rock with your fingers in your ears, you’ve probably heard the band’s lead single “1921,” from their new album Wolfgang Amadeus Phoenix that went wild when it was released to radio in February of 2009.

They almost look like The Allman Brothers. They almost sound like they’re from Colorado. But the five-piece jamgrass fusion band Greensky Bluegrass come from the land of U.P.ers and trolls — Michigan. With their new live project All Access in hand, the band has been on the road relentlessly. Honest bluegrassers with modern chops, the band’s large sound and mastery of the genre allow them to explore new frontiers, infusing rock and roll standards on their own musical terms.