Trending Stories from The Marquee
You are at:Home»Album Reviews»Drive-By Truckers
By Marquee Magazine on April 1, 2010 Album Reviews, Brian F. Johnson 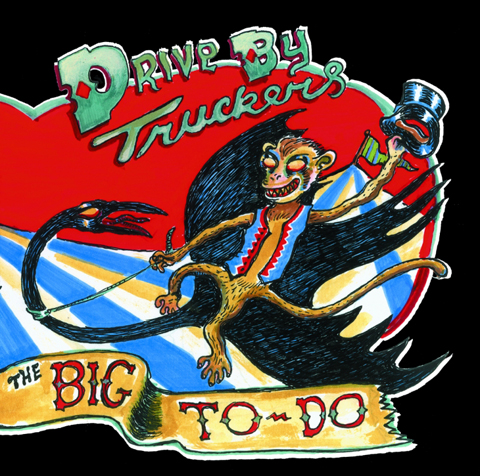 My biggest gripe with The Big To-Do is a trivial matter that no one can help, but one that I can’t seem to get over. The Big To-Do is not Southern Rock Opera — the  2001 double-disc release that was more educational than a college level course on the subject of the South. Those two discs defined  the band’s sound and heritage and will, most likely, eternally be held up as the litmus test for where the Truckers stand.

That’s not to say that The Big To-Do isn’t fine work, but it is not chock full of beer-cans-to-the-ceilings sing-alongs — the anthematic tracks that we’ve come to expect from Patterson Hood, Mike Cooley and company.

It almost felt like this album was going to be one we’d be singing along with and starts off strong with the guitar attack on “Daddy Learned to Fly.” From there, The Big To-Do leads into the Patterson Hood-penned “The Fourth Night of My Drinking” and Cooley’s classic Trucker-feeling song, “Birthday Boy.”

But the band’s storytelling songs take a poor turn when they reach “The Wig He Made Her Wear.” The song is great in explaining an old court case, but does little to engage the listener. It’s almost as if they were trying to come up with another narrative like “The Three Great Alabama Icons” from The Southern Rock Opera, but fell short.

The next track is simply jarring for any long-time Trucker fan. Bassist Shonna Tucker has been writing songs for the band’s last few albums, and “You Got Another” is admittedly a beautiful song, but hearing a female vocal- driven piano song on a Trucker’s album is a little bit like finding a Hyundai engine under the hood of a Peterbilt — it may make the wheels go around, but it’s not going to have any power.

The next two songs, “This Fucking Job” and “Get Downtown,” are both fine songs, but nothing that’s gonna get your heart racing.

“After the Scene Dies” is a great song about the current music scene, and one that Truckers fans will be familiar with as it’s been played live by the band for several years now. The song is possibly the best on the album, and one that showcases Hood’s ability to blend storytelling and songwriting perfectly.

Tucker follows with maybe the most sing-along song on the album with “(It’s Gonna Be) I Told You So.”

Hood’s “Santa Fe,” which he points out in the liner notes was written “before and after soundcheck” on June 17, 2008, is another strong song, and one that feels like it could have easily fit on 2003’s Decoration Day.

And the album finishes particularly strong with Hood and Cooley turning in “The Flying Wallendas” and “Eyes Like Glue,” respectively.

The Big To-Do is not the Trucker’s best work — but maybe that’s just because I’m a pussy who refuses to grow alongside the band. I’ve always referred to such nonsense as “The Peter Frampton effect.” That poor guy could write the world’s best album, tomorrow, but no one wants to hear that from him — they still just want Frampton Comes Alive. I hope beyond hope that doesn’t happen with the Truckers, and that the next album has a couple songs that I can sloppily sing along to with my friends while we spill beer on each other at the show.