Trending Stories from The Marquee
You are at:Home»Features»Silversun Pickups
By Marquee Magazine on April 1, 2010 Features, Garin Pirnia, Interviews 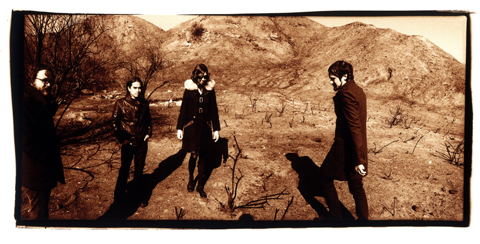 Los Angeles quartet Silversun Pickups’ textured array of sonic blasts on their Pikul EP (2005) and Carnavas LP (2006) helped to establish them as one of the most exciting indie bands to hit the stratosphere in a long while. But they didn’t exactly earn their success overnight — the group had been together for almost ten years by the time their second full-length, Swoon, became a bona fide triumph last year. An amalgam of the band’s enduring friendships, relentless touring, and pure luck continues to propel Silversun Pickups forward.

“It’s crazy because we’re oblivious to it,” said drummer Christopher Guanlao in a recent interview with The Marquee. “It’s not in our nature to think [of us as famous]. It’s surprising when someone asks us about fame, because we’re just regular people doing the same thing as before. No one treats us any differently.”

The four members all grew up in the L.A. area and have been friends for years. They reside in Silver Lake, the city’s artistic community that launched the careers of fellow Silver Lakers Rilo Kiley, Elliot Smith and Airborne Toxic Event.

Guanlao mentioned that the band members are friends first and bandmates second. “It’s cool to be in a situation where we knew each other so well before the band,” he said. “We’re brothers and sisters more than anything. We’re pretty easygoing; there’s not a lot of drama. It helped we knew each other before as opposed to meeting on Craigslist. Sure, we get sick of each other, but in a loving way instead of an ‘I don’t know about this dude’ kinda way.”

The group will be opening up for U.K. powerhouse Muse during their spring tour and will be playing some gigantic stadiums. It seems like most bands would be intimidated by such a spectacle, but not Silversun Pickups. “We get more nervous playing for 10 people instead of for 25,000,” said Guanlao. “We’re in a place in our career where we can open up for Muse, then play a headlining show. I like that back and forth and love the intimacy of playing clubs. It’s fun to play Lollapalooza in front of all those people. And we’re fortunate enough we can go back and forth.”

Last month, Silversun Pickups were nominated for a “Best New Artist” Grammy, but lost to country sensation Zac Brown Band. They didn’t expect to win, but for a split second they thought the coveted award was within their reach. “Getting recognized is cool, but it doesn’t mean very much. It wouldn’t change what we do. It wouldn’t change our music. It wouldn’t influence our music,” Guanlao said. “We wouldn’t be better or worse if we won. It is good for our parents, though, so they can brag about us for a change.”

Silversun Pickups probably won’t be heading back into the studio until their tour dies down a little, but Guanlao is optimistic about the direction the band’s taking. “Honestly,” he said, “we’ve had a pretty good run with this record so far, so it seems a little selfish for me to ask for more. Everything from the Grammy nomination to opening up for Muse and being able to play shows in Europe, what more can I ask for? We won already. We basically want to keep at it and hope we can put on good shows. It’s all we can ask for now.”