Trending Stories from The Marquee
You are at:Home»Album Reviews»Band Of Horses
By Marquee Magazine on May 1, 2010 Album Reviews, Jonathan Keller 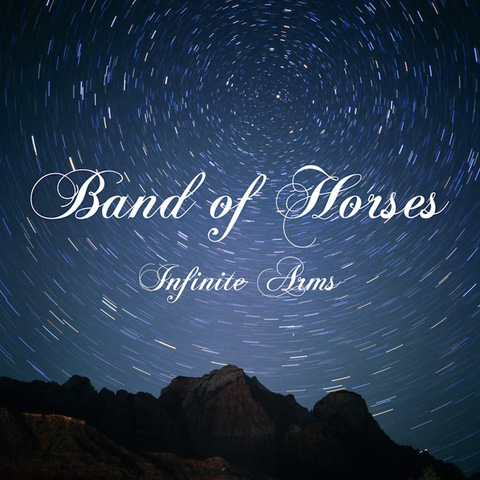 You might call a band crazy to leave Sub Pop for another indie label, but when gauging Band of Horses’ latest release Infinite Arms, it seems Sub Pop might have needed the band more than the band needed the label. Infinite Arms would probably do well no matter who released it.

Fitting was the band’s departure from the indie label since Band of Horses’ sound has grown into more of a folk-rock delivery, save for a few tunes that still have their traditional indie rock feel. Lead vocalist/guitarist/chief songwriter Ben Bridwell is still the band’s shining star and it’s hard to say whether this batch of new songs are better or worse than those collected on their previous two albums.

However, it would be safe to describe the new songs as ‘consistent’—they sound like a welcomed extension of Band of Horses’ last release, Cease to Begin, and could have arguably been released as a double-album.

Overall, Infinite Arms is a pleasurable listen. It revolves around Bridwell’s soaring vocal melodies (which at times make one wonder if he is a Jim James clone) and features the band’s now-trademark spacey, swirling guitar arrangements. One of the band’s strengths has always been in song structure and with most of the album’s songs around the four-minute mark, they never carry anything on too long; even on the less-pleasurable tunes, the next track begins before you can ever really decide to hit the skip button.

Recorded over a 16 month period in various locations — including the band’s new home of North Carolina — concluding in 2009, Infinite Arms does have more of a subtle Southern swagger to it and the band seems to be making a conscious effort to sever their ties to the Seattle indie scene where they formed. The  closing track, “Bartles + James,” evokes thoughts of the ideal Southern gentleman and the pedal steel featured on “Older” definitely provides some welcomed grit.

With the sonic assistance of producer and engineer Phil Elk (Built to Spill, Fleet Foxes), Band of Horses plow through 12 songs which are ordered in a way that creates a ballad-sandwich in the middle of the disc. Infinite Arms’ first three songs, which includes the album’s first single “Compliments,” gives way to six ballads which showcase some of the album’s best work.

The title track is worth mentioning and it is no wonder the album bore its name. Much like the swirling beauty of Cease to Begin’s “Detlef Schrempf,” “Infinite Arms” begins with a gentle acoustic guitar strum and a clean, rolling electric guitar. Bridwell’s double track vocal enters, building to an angelic and quite glorious chorus. It might be one of the most beautiful songs the band has ever written and recorded.

Other album standouts include “Way Back Home,” “Bartles + James,” and “Blue Beard.”

With only three albums under their belt, Band of Horses is well on their way to creating their own niche in popular music. Infinite Arms should further them along and hopefully will create the commercial security for them to take some real musical chances in the future.