Trending Stories from The Marquee
You are at:Home»Brian F. Johnson»Desert Rocks Festival
By Marquee Magazine on May 1, 2010 Brian F. Johnson, Features, Festival Coverage 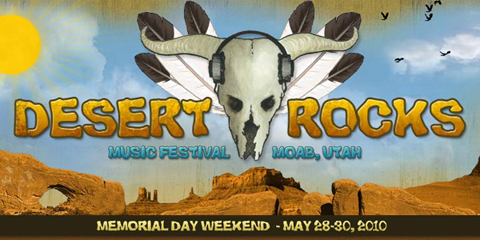 Desert Rocks is the west’s most secluded fest

Someone forgot to tell the organizers of Desert Rocks that Moab is in Utah, and not Colorado.

The festival is chock full of Colorado bands — the same staples that we see around here for mid-sized festivals — but instead of being held at Barker Reservoir in Ned, these guys are giving Coloradoans another reason to head to Moab.

Now in its sixth year, Desert Rocks has gotten through some of its growing pains and its inevitable hits of weather and is ready to make 2010 its strongest year yet.

Organizers are also offering a very limited number of swanky, pre-setup, on-site RVs that sleep 6 to 8 people. The units include showers, toilets and kitchenettes and can make roughing it in the desert a cakewalk.

And, in addition to tethered balloon rides, the promoters have also hooked up with several excursion companies in the area that can take attendees on guided tours of Arches National Park, or on rafting trips on the Colorado, and still get you back to the festival grounds before dinner and in time for evening shows.

(As calculated by maps.google.com from

YOU NEED TO KNOW: You may be at a hippie festival in the desert, but you’re still in Utah. Don’t be stupid about your drugs, now. In Utah, possession of less than one ounce of marijuana is still a misdemeanor, punishable by a $1,000 fine and up to six months in jail. If you’re unlucky enough to sell any amount to a cop, you’re looking at a felony charge with a $5,000 fine and up to five years in jail. Utah is also a state with “drugged driving” laws, and while you don’t need to be high, if it’s in your system you’re going to get in trouble. Travel safely in these unsafe territories.