Trending Stories from The Marquee
You are at:Home»Cover Story»Disco Biscuits
By Marquee Magazine on May 1, 2010 Cover Story, Features, Hap Fry, Interviews 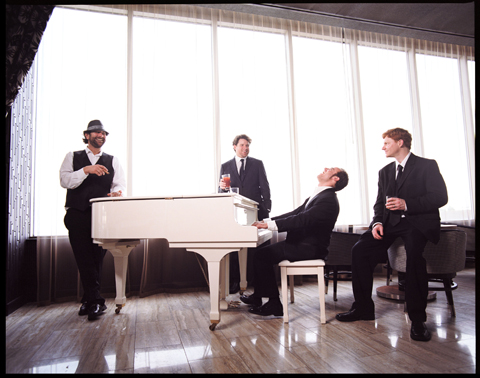 Destiny has a unique way of showing itself at times.

For Disco Biscuit keyboardist Aron Magner it came in the form of his next door neighbor, Ann Gruenberg, who just so happened to be a piano teacher.

Magner probably ended up being one of Gruenberg’s youngest students after he started taking lessons at three in her Philadelphia area residence.

“My parents started me out on piano really young, but it was something that I really enjoyed doing,” Magner said during a recent interview with The Marquee. “I guess by the time I got to 11, I got really bored of it. I was probably getting somewhat rebellious at that time. I wanted to hang out with friends and play sports, so I stopped. But it kind of was calling out to me a couple of years later so, at 13, I started back up again. That’s when I discovered jazz, and I didn’t look back from there.”

A couple of years later, Magner began taking lessons from another teacher, Michael Frank, who ended up having a lasting impact on him.

“I took a lot of influence from that teacher,” Magner said. “He really gave me the confidence as a teenager to know this is something I could totally do with my life.”

Fast forward to the present, where Magner found himself backstage at The National in Richmond, Va., gearing up for the Disco Biscuits’  show one recent April night.

As the keyboardist for the Philadelphia-based quartet that also features Jon Gutwillig (guitar), Marc Brownstein (bass) and Allen Aucoin (drums), Magner has had a front row seat in watching the Disco Biscuits grow into one of the more successful touring acts in music today.

Later this month the group will bring its unique electronica-style to Colorado, with shows at the Boulder Theater and Ogden Theatre, before hosting their much-anticipated Bisco Inferno at Red Rocks for the second consecutive year.

“I thought it was wildly successful,” Magner said of the 2009 appearance. “I mean, 7,000 people at Red Rocks for our first time definitely felt like a huge sense of accomplishment, and I think our fans felt that too. It’s a sense of accomplishment for them, too, because they shed their blood, sweat and tears traveling on the road with us and helping us spread the gospel long and far of the Disco Biscuits.

“Bisco Inferno has evolved and grown up the same way the Disco Biscuits have. We’re growing it, and we’ve got an amazing lineup this year. We’ve got more of a production budget. Last year, we did some video projections for the first time and we had some dancers in crazy costumes. And of course we’ve got some more tricks up our sleeve this year. It’s Red Rocks, man,” he said.

One of the tricks the Disco Biscuits may have up their sleeves could involve Magner having some company on the keyboards in the form of Gutwillig, who had to partially sit out the group’s spring tour after a wrist injury required surgery.

The band brought in talented guitarists Tommy Hamilton (Aerosmith) and Chris Michetti (RAQ) to help fill the void, but Gutwillig did not sit idle. The group instead — much to Magner’s liking — set Gutwillig with a keyboard and let him go to work. “For me, I only have two hands, and I’m surrounded by 16 different keyboards,” Magner said. “I’m not an octopus, so it’s been great having Jon there. I love it when there are two keyboard players.”

The band released its thirteenth album (the band’s fifth studio release), Planet Anthem, in March, so the group will have plenty of fresh material to work with when it arrives in Colorado. The release began roll out in late 2009 with the EPs On Time and Widgets. Each EP included several songs from the album plus remixes and live versions, and was part of an experiment to “wet people’s whistle a little bit,” bassist Brownstein told Billboard.

This past winter the band also announced that it would be hosting Camp Bisco 9 in July in Mariaville, N.Y. As in years past, the band will headline all three nights, but also plan to have another 50-plus acts on hand for the event. While Camp Bisco is an incredible undertaking (it was profiled last year in Billboard as a growing business model for artist-owned live events), it almost pales in comparison to the attention that the band has showered on Colorado this year. The band did a four-night run at the Fox Theatre in January and will (side projects and after-parties included) play another five shows on this run through the state.

“Colorado has always been a great market for us,” Magner said. “There’s something unique that’s going on in Colorado. There’s almost like a Colorado sound in the electronica movement. It’s definitely a market that everybody needs to hit.”