Trending Stories from The Marquee
You are at:Home»Features»Matt Pond PA
By Marquee Magazine on May 1, 2010 Features, Interviews, Timothy Dwenger 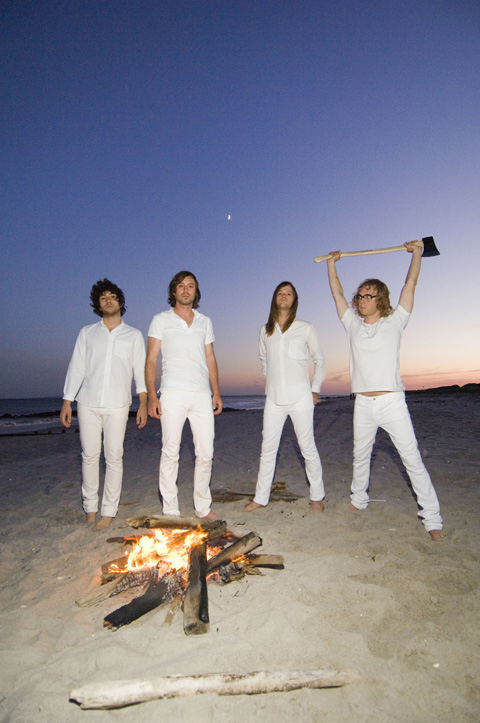 It has been said that the circle of life constantly gives rise to new beginnings. As one thing passes, another rises to take its place. It may be a bit cliché but it’s a principle that seems to be playing out to the benefit of veteran indie-rocker Matt Pond.

A couple of years ago, Pond came up with the notion that he wanted to start a new band. Not a band that would replace matt pond PA, but rather one that would serve as an alternative outlet for some of his songs. The project, which he dubbed The Dark Leaves, gathered speed and Pond began to pen songs for the band. Unfortunately, before the group could put the songs to tape, the group self-destructed. “I thought that I had gotten together a really nice band of people and we were building toward something special, then the bottom dropped out of that. I think the album became my own reassurance to myself about what it is that I am actually doing. It would have been cool. Nothing ever turns out perfectly but things tend to turn into something,” said Pond in his characteristically vague way, during a recent interview with The Marquee while he and his band were enroute to Lincoln, Neb.

But two years after that project imploded a new mpPA album, not-so-coincidentally entitled The Dark Leaves, is available. The album contains some songs that were written for the band of the same name but Pond is quick to share the credit for the songs with his current bandmates, and the last remaining member of the group that was to be The Dark Leaves, Chris Hansen. “Some of them were started a few years ago, but most of them were finished in the past year,” said Pond. “The most important part of the process was when Chris and I focused-in and made them what they were supposed to be. There is a lot of immediacy to music but we aren’t just doing this for ‘now.’ A recording is pretty permanent, and it feels that way, so we definitely have that in mind when we are finishing the songs.”

Since 1998, when Pond put out the first mpPA album, a seemingly endless stream of musicians has passed through the band. “I love a lot of the people that have played in this band. I’m friends with probably 95 percent of the 100 people that have played in this band, even though things can get pretty hairy, especially touring and traveling,” he said. “People just have different expectations for what this is supposed to be, and the underlying, bold-faced thing that people have to face with doing this is that the only thing you can want out of this is to just play music. It’s the only thing that is going to consistently happen. There is so much up and down and so much adversity, unexpectedness and sleeplessness, that if you expect anything beyond trying to play well and trying to have a good time in every town we play, then you lose sight of what this is. It’s hard to stay in touch with that reality.”

Most listeners would be hard pressed to tell if this revolving door policy, that seems to be so ingrained in the fabric of mpPA, has had any negative impact on the band’s output over the years. The Dark Leaves is Pond’s eighth LP under the mpPA moniker and the group has released another seven EPs. While there are subtle stylistic shifts that mark the passage of time and personnel, each album bears Pond’s very recognizable stamp. “A lot of people have been able to see the connection and the line that we allow ourselves to move in. When people see that all these things add up to something larger, and that they are supposed to, that is the most exciting thing,” he said as he discussed the sum total of the mpPA catalog.

In particular, The Dark Leaves deals with lost love, as Pond got his “heart severely smashed apart” early in the songwriting process. While he is reluctant to give much insight into the meaning of the songs or even the title of the album, preferring to leave it open to interpretation, he did reveal a little about some of the recurring ideas on the record. “I came up with this idea of fawns and how there are certain people who you are just not going to be able to relate to because they are a different animal,” Pond said. “There are jokes in there, and some people don’t get the jokes as they aren’t really ‘joke jokes,’ but a lot of this stuff deals with being able to see that it is ridiculous to get so tied up in these things that you run around in circles and obsess and write songs about them. That’s what the first song, ‘Starting,’ is about,” he chuckled.