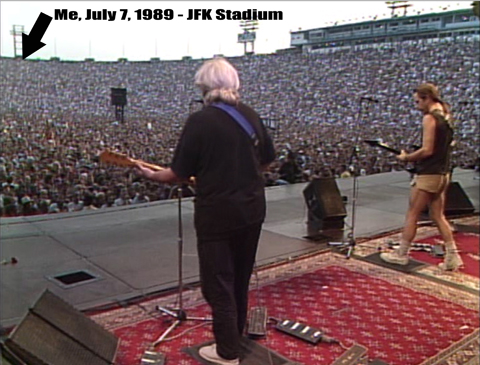 From the barstool of the publisher

It dawned on me this month, as I was writing the CD review for the Grateful Dead’s Crimson, White and Indigo (page 25), that I miss the super-mega giant stadium shows that I used to see on the East Coast.

Don’t get me wrong. I’m in love with the outdoor venues that we have around here. Red Rocks, the Mish and Planet Bluegrass Ranch are some of the most amazingly wonderful and intimate places in the world to see outdoor shows. But as gorgeous as those places are, seeing the DVD from the Dead’s most recent release made me truly miss sharing a concert with 100,000 or more people.

The J.F.K. Stadium show that I wrote about and attended in Philadelphia in 1989 stands as the largest crowd I’ve ever been in — 120,000 people, or more than a dozen Red Rocks, which holds just around 9,000. The field alone held more than two Red Rocks worth of crowds.

I think about it in retrospect and I can’t believe there were ever such large gatherings of people that didn’t end with utter disaster — although one could easily argue that South Philly in ’89 was already a disaster.

But what really struck me, as I took in the CD/DVD set, was the attachment that I felt to that stadium and many of the other monsters on the East Coast which were my summer stomping grounds.

R.F.K. Stadium in Washington, D.C. (where I saw my 21st Dead show on my 21st birthday), Giants Stadium in north Jersey (which was just demolished in May), even the coliseums of the northeast — the Philadelphia Spectrum (where I saw 13 shows), the Boston Garden (one show) and Nassau Coliseum (a dozen shows) — they all had something that few places we see shows in today have — history.

There was something magical about seeing a big show at the same field where Jack Dempsey lost the heavyweight boxing title in 1926. It was special to be in the hallowed halls of the Spectrum, where the Flyers won their second Stanley cup in 1975 (and where, in 1994, I witnessed the City of Philadelphia unveil a tie-dyed banner in the rafters of that building commemorating the Grateful Dead’s 50th show at the venue).

True, Red Rocks has the history to back up its legend, but so many new venues these days have comfy seats, clean bathrooms and all the historical significance of a one-hit wonder. Maybe I just forget how bad those places smelled, but damn it, I miss them and am grateful for the memories.