Trending Stories from The Marquee
You are at:Home»Album Reviews»Grateful Dead
By Marquee Magazine on June 1, 2010 Album Reviews, Brian F. Johnson 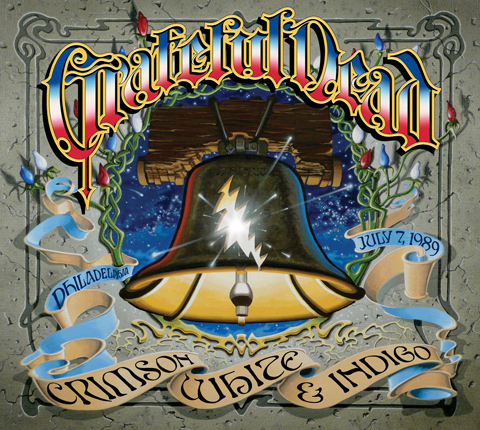 It was miserable and pure paradise all rolled into one.

July 7, 1989 was one of the hottest days of the Philadelphia summer — we’re talking East Coast, humid and muggy hot — the kind of heat that you feel in your lungs with every breath.

On that day, 120,000 people  (that is not a typo) piled into the famed John F. Kennedy Stadium in South Philly — a classic, old fashioned, gladiator-style horseshoe football stadium built in the 1920s, which unbeknownst to the fans was on its death bed. Across the street at the then Philadelphia Spectrum, Ringling Brothers was hosting its circus. The collision of smells was a brutal, relentless hell.

Meanwhile, hot on the heels of their career’s largest commercial success, the Grateful Dead were being reborn. With their popularity at an all-time high and with Jerry Garcia in one of the most healthy phases of his life, the band stepped into dangerous territory for this show.

You see, J.F.K. stadium held 102,000 people in the bleachers, and another 18,000 on the field. As the massive crowd started to swim their way through the thick, palpable heat, the old stadium started to give way. Newspaper reports days after the concert talked about burst pipes that were pouring out onto the field, bathrooms so grotesque that they were simply unusable, and scariest of all, large structural cracks in the concrete columns that supported the mammoth stadium.

Despite this, or maybe because of it, the Grateful Dead played one of their best shows of the year that day. Nineteen songs and nearly three hours long, the concert was a picture of beauty. As the heat of the day slowly subsided it gave way to a picture-perfect view of the sun setting behind the skyline of Philadelphia.

I sat at the way, way back of the horseshoe at the top of the bleachers (on purpose), taking in the entire panorama all at once — like all of the fans there, oblivious to what was unfolding (or crumbling) beneath our grungy feet.

Now, however, 21 years after the show took place, Rhino has lovingly released the show on three HDCDs and one DVD — shot by the same crew that filmed the legendary Truckin’ Up To Buffalo DVD.

The audio on this collection is spectacular, mixed from the 24 track analog master tapes, but the multi-camera shoot for the DVD is the real magic of this release —bringing fans up onto the stage, and peering over the shoulder of the musicians to highlight the incredible magnitude of the scene.

The set list here is almost inconsequential, but the band was “on,” firing through first-set gems like “Iko Iko,” “…Memphis Blues Again,” “Loser,” “Let It Grow,” and “Blow Away.” Set two was highlighted by a “Scarlet>Fire” and a riveting version of “Standing on the Moon,” as well as an “Other One>Wharf Rat>Lovelight” set closer. But the encore of “Knockin on Heaven’s Door” was a magical experience.

It was the last song ever performed at J.F.K.

Less than a week later, the stadium was officially condemned by Mayor Wilson Goode. In 1992, it was demolished to make way for a modern-day indoor stadium now known as the Wachovia Center.

This event has always been a special one to yours truly, and Crimson, White and Indigo couldn’t be a more memorable eulogy for both the legendary band and the legendary stadium.